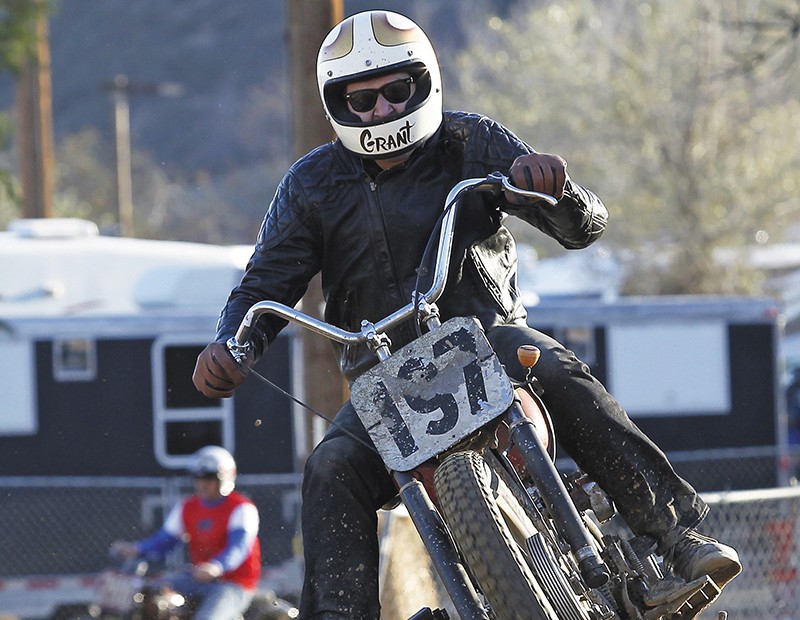 It’s all about the Journey: Born-Free 8

The Born-Free Vintage and Classic Moto Show is an annual gathering of the motorcycle masses hosted on 17 acres of moto-friendly Southern California ranch land. The Oak Canyon Ranch has become the destination for gear heads, moto hobbyists and car and motorcycle enthusiasts of all ages from all over North America. In preparation for the eighth annual Born-Free Show on June 25 and 26, co-founder and Salt Lake native Grant Peterson reflects on the culture of growing up in Utah and how BF has evolved yet stayed true to its “glorified barbecue” roots.

SLUG: As a Salt Lake native, what was your childhood like and what made you relocate?

Peterson: Yep, born and raised in Sugarhouse. Growing up in Salt Lake back then as a kid was a lot of fun. You could still go and adventure and do all the kinds of stuff kids used to be able to do. As I got older, I got into old cars right around the age of 15. I got obsessed with vintage cars and Ford Pre-War hot rods. Anybody under 50 in Salt Lake wasn’t really doing anything like that, but I had found a group of guys my age in Southern California. That was my catalyst for moving.

SLUG: Since moving out o f the Salt Lake scene, how has the moto culture changed?

Peterson: Back then, there wasn’t really a scene or culture. The antique car and hot rod stuff there was only a handful of us doing it. There weren’t any younger people with shops—fabricators, engine builders—not like there is now. We’ve worked with Andy Carter of Pangea Speed now for a few years. He’s been a featured builder at the show.

SLUG: How did Born-Free get started?

Peterson: It kind of got started with my friend Mike Davis and me and our little niche of motorcycles that we like. There wasn’t really a show that catered to [us]. We would go to these big shows, and it was a whole convention-center-type setup, with maybe two or three bikes that we liked. It’s not really our style. We like more traditional kinds of bikes—mostly vintage Harleys. Mike is into vintage Triumphs. We decided to do something, because when we would have a barbecue at a friend’s house, we would have better bikes there than at most of these shows.

We threw [the show] together in 30 days. I made a flier in Photoshop and passed it around, and it got reposted. We had friends from across the country who came to the first [BF], which was a glorified barbecue. What showed up as far as people and bikes was exactly what we wanted. There were about 200–300 bikes, and 400 or so people showed up. For the second BF show, we had moved it to Signal Hill, and it was 10 times as big as the first one. We only had 10 Porta-Potties. We had a great time, and that was kind of just flying by the seat of our pants. We decided to give a bike away and built a 1950s Harley Panhead.

SLUG: Why is the show such a success, and how has it changed?

Peterson: I think a lot of it has to do with Southern California being a destination for a lot of out-of-towners. The Southern California hot rod, car and motorcycle culture is still a draw for people. We’ve worked hard to stay where we are, even though we hit at least 20,000 people at Born-Free 5. That was a pivotal show for us. There were so many people. It was almost too much for what we wanted. We’ve always been open arms, but there was too much late-model stuff—it wasn’t what we wanted. It didn’t help that there was a heat wave going across the country. It was like the Woodstock of choppers. Until then, the show had been free for five years, but we went to a $10 admission. It weeded out the people who weren’t contributing to the show. Because of that, it has continued to grow.

SLUG: How has making Born-Free a two-day event changed the show?

Peterson: It was really just four or five hours of pandemonium before [the change]. It was kind of just a blur for one day that we worked all year for. So, the two-day thing has really been cool, especially for people who are traveling. They can have time to visit with friends. A lot of people plan their whole summer vacations around [the show]. I get goosebumps every time I think about the thousands of people who do these trips. They may forget the show, but [they’re] not going to forget the journey.

Strap on your Pendleton blanket and $1 black bandana from Wal-Mart, and head to the eighth annual Born-Free, hosted June 25 and 26. For more info, check out BF on Facebook, Instagram or bornfreeshow.com.