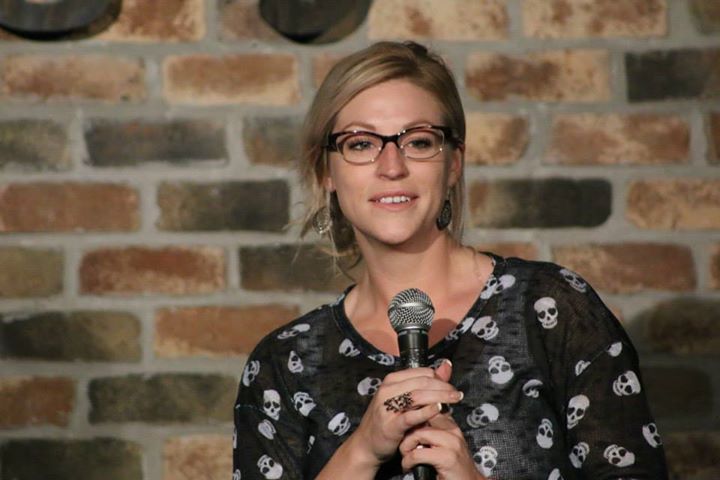 Krissie Shelley: A Voice For All Of The Misfits

The world of podcasting and podcasters has become as diverse as any form of entertainment. You could get lost in a rabbit hole and never find anything that resonates with you, but every once in a while, you might come across a gem of a show, and you will wonder how you went through life without it. We have one of these sparkly gems right in our own backyard: “The Totally Real Podcast That is Real,” a podcast that sets out to ask funny people serious questions. Krissie Shelley is 50 percent of the female-fronted show. She’s a stand-up comedian, and thoughtfully entertaining. Shelley joined SLUG for a big heaping plate of nachos and cheese fries at Mo’s Diner in Salt Lake and when we weren’t just casually talking about serial killers, we talked at great length about comedy, podcasting and Tinder.

Krissie Shelley originally hails from Wisconsin, but now calls the Salt Lake Valley home. She started in stand-up comedy three years ago. When Shelley was at a low point in her life and felt that comedy was a good place to go as an outlet. “I think going to open mics or being around comedians in general is a great place to go when you just need to be yourself and say things you’re thinking and not be judged,” she says. Here, she found purpose and a reason to get out of the house. “This Salt Lake scene is really supportive of each other,” says Shelley. “It’s just a place you can go where you can just unwind and not stress out, and just get stuff off of your chest. Then, at the same time, you also learn that you can take stuff in your life and just adapt it so it can help you. If you are just really depressed and you hold it in so you stay depressed, that’s really unhealthy.” She has found inspiration in other comedians who “tell it like it is” such as Lewis Black, John Mulaney, Louis C.K., Kathleen Madigan and Maria Bamford. Comedy, she feels, recharges her. It is a chance to be around people who have had similar feelings. “It’s a really great place for people who have a hard time or who are misfits—who don’t really fit in with typical society,” she says. “You tend to shock ‘normal’ people.” Through comedy she has connected with and met other ‘misfits’ like herself, with other familiar experiences. “It is really accepting,” says Krissie Shelley. “There’s a great group of people here that you can kind of turn to when you just need to go to and find a solace. I find that to be the artistic community and the comedy scene. They are very open and loving.”

Being female in general has been hard in the mostly male-dominated world of comedy. That’s been changing, though—not only on a larger national scale, but even locally. “It’s so nice to have more girls,” says Shelley. It’s nice to finally get looked over and just be left alone.” With more women, she feels that there isn’t a token female to pick on. “I actually saw one comedian rant about women on stage and how he can’t focus on his set when he’s staring at their bodies,” she says. It’s just kind of like, ‘You’re a bastard.’ Why don’t you just focus on your set instead of being an asshole? I’m sorry but that’s YOUR problem. It’s a cop-out.” She feels that some of the issues she had starting out were just some of the other comics adjusting to another female, and that things have improved quite a bit. She’s seen others gradually just becoming nicer in general on the comedy circuit. “I would say that the vast majority of guys here are stand-up guys,” says Shelley. “It’s just like having a million brothers that are super cool.” Krissie Shelley speculates that local comedy has become more female-friendly because there are more women joining the ranks. In the past, girls have tended to come and go very quickly in comedy. “I’ve seen girls that are so talented that I’d kill to be them, and they’ve left the scene,” she says. “It makes me sad because it’s just the drama.” It’s not a problem of talent, but a problem of fitting in and having a place. “I think it just depends on how much you want to do it and how much you really enjoy it,” says Shelley. “Girls who want to do it will put up with some of the bullshit because we love the art of comedy. Period. But some girls who try it out and are really talented at it—maybe they just don’t love it enough or they’re still finding themselves. Everybody kind of finds the thing that they love, and maybe it just wasn’t comedy, and the drama was enough to drive them away.” As a mom, with an 11-year-old daughter that wants to become a famous actres. Shelley is kind of torn on it—on the one hand, she just wants her to focus on being a kid. On the other hand, she also started out on the stage very young and never turned back. She has already broken down and admits that her daughter has now got an agent.

Shelley describes herself as a “burnt-out drama geek” getting her start performing in High School. She’s always had a love for sketch comedy, but liked the flexibility of stand-up, which she began to pick up as an outlet just over three years ago. Krissie Shelley is a lover of podcasts herself, but mostly enjoys intriguing stories told by fascinating people. She points out that her favorites are Sword and Scale, Serial and Thinking Sideways, as she’s interested in true crime and serial killers. Along with her friend Annie Wagner, she discovered that they both had the desire to do a podcast, so she learned how to record and set up a makeshift studio in her living room. The Totally Real podcast runs about one hour on average, with new shows almost weekly. The biggest challenge in recording is getting everyone together and finding the time to produce the show. Even with the challenges, these two funny ladies have clocked in 26 episodes since their debut in December 2014, featuring interviews with local comics, teachers and other funny people from online and in the community who are interesting.

She states that the goal has always been to have on people that are funny or fun to be around, and present a serious topic that never goes too seriously. However, she’s doing the podcast for her own reasons,“If I don’t have a place to go talk, I will lose my mind,” says Krissie Shelley. I just need to vent, which probably isn’t healthy.” The duo tackles serious topics but also take a pause to work on their own social experiment, which is using Tinder. In all fairness, Tinder started as a running joke, now they are on it talking to people. “It’s been an interesting experience, and I’ve changed my view on Tinder since starting the podcast,” she says. “Before I was like, ‘This is an app for douchebags. Only douchebags judge people by what they look like.’” She has fully disclosed the podcast on her Tinder, as her main purpose there is to use it as a social experiment. “It does provide tons and tons of comedy gold.”

Over time, she’s had some interesting feedback from people who have been through the same situations. “I don’t know what I’m doing, I’m just me,” she says. Shelley’s not sure what do when people seek her out looking for advice or instruction. “I think they think I’ve already been through the wringer and I’ve come out on the other side, so I might have insight for them. Which in some ways is true, but also, I’m an incredibly messed up person. So, my advice may not be great.” In the future, it would be great for her to see the show become more successful, but right now she enjoys just having the ability to do it. “I would honestly love for it to take off,” says Shelley. “There’s something about getting together and brainstorming and recording with people. It’s just picking people’s brains and understanding how they think, and there’s something that I really love about that.”

Currently, Krissie Shelley has no big plans and dreams of grandeur, and yet her passion still shines through in every episode or performance that she does. “I’m only doing things because I would be depressed if I didn’t. And I think that everyone should do that. So if nobody listened to my podcast, I don’t care. I’d still keep and paying for it and doing it for the rest of my life, because, why not? Why not enjoy it.” Her advice and insight is simply this: Do things for the love of it. “You don’t need someone else’s validation. Everybody has something to give, just find out what you love and do it as hard as you can or as hard as you’re able to.” As for ways to support the passions of comics throughout Utah, Shelley advocates to support local comedy. “Especially the women comics. I always say that, and maybe it’s mean to the guys, but I think the women need more support out here,” she says.

After taking a break from recording this summer, the newest episode of ‘The Totally Real Podcast That is Real” will drop this week with guest Andy Gold. You can check it out for free on Stitcher, iTunes, or anywhere you can find quality podcast material. If you’re not a podcast junkie yet, you can also check out the show on their website. Twitter @thetotallyreal and Facebook. Also check out Krissie Shelley on Twitter @krissietweets. Get out and check out local comedy and open mics to see more of her, and other great local comics nearly every day of the week.