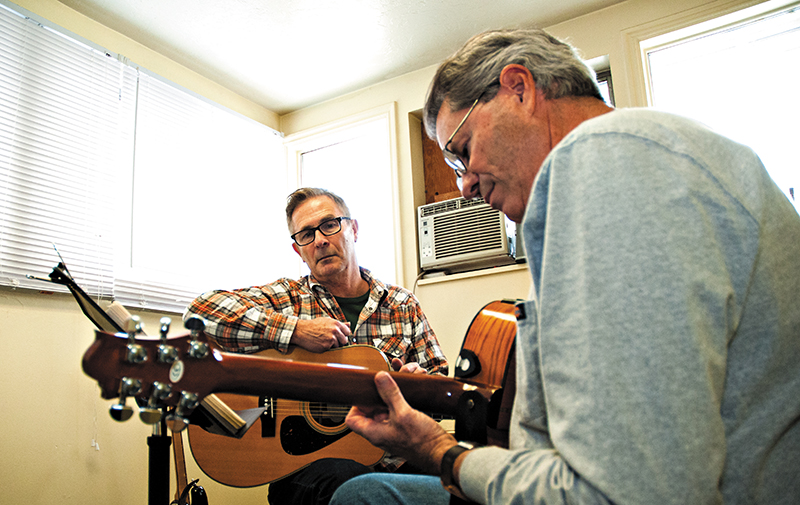 For some 40 years, Acoustic Music has stood just west of the corner of 400 South and 900 East. A small business located in a quaint house, its most audacious feature is the neon “OPEN” sign that shines in the window six days a week. Located in another unassuming house just three doors west is Acoustic Music Studios. The pair of structures become what guitarist Kim Driggs calls the “opposite of a super-store.” The studio operates according to a similar model—not stark and minimalist so much as homey. Driggs has been teaching guitar at the studio for 25 years now, longer than any other instructor there.

Though, over the years, the two locations have come to stand on more equal footing, “the studio was first created as a means of supporting the store,” Driggs says. Originally opened by Jim Major, the store’s longest owner has been Hardin Davis, and it is currently owned and run by Brian Winter. Driggs himself has previously worked at the store and continues to frequent it. He prefers the friendly, face-to-face interaction of buying and selling musical instruments at a local business rather than a chain retailer or online.

Driggs formally trained in music at the University of Utah. His emphasis was jazz composition, which he studied under guitarist Kevin Johansen. Driggs went on to teach guitar to non-music majors at the university for several years. “That gig ended when the university moved away from the quarter system and ceased to offer credit for my courses,” Driggs says. “Music always seems to get cut first.” He is quick to insist that music is also an important way to build character and community relations. “Here at the studio, we tend to blur the line between guitar lessons and life lessons,” he says. Driggs finds that a natural and satisfying sense of camaraderie emerges from music studies, and has frequently become friends not only with his students but also with their families.

The drawback to this informality and intimacy, Driggs suggests, is that many take him less seriously as an instructor. Despite this, Driggs finds great satisfaction in the way his pedagogy has changed lives. He speaks of students who unexpectedly discovered a sense of self-confidence that carried them through graduate programs in fields not directly related to music. “One wrote me years later to say thanks,” he says. It’s private acknowledgement of this sort that Driggs, who refuses to be coaxed out of his modesty, says he values far above any formal recognition or official honors.

Driggs’ approach to teaching centers on the love of the instrument and the joy of playing. “You don’t really learn guitar during your lessons,” he says. “You learn when you play elsewhere.” Driggs eschews the word “practice” in favor of the more colloquial “play.” For him, the former feels too tied to formal theory training and insufficiently connected to making music in community with others—like studying for a grammar quiz versus striking up live conversation. “Instead of exercises,” he says, “I prefer to teach songs … They are individual statements within a commonly spoken musical language.” For Driggs, an essential component of learning to speak music is what he calls “critical listening.” Instruction with Driggs’ students often begins with something as simple as strumming the instrument randomly to hear and experience the guitar’s sensations. It’s falling in love with the physical feeling of the instrument. Once this fundamental appreciation has been activated, Driggs claims that it becomes his responsibility to “teach students how to teach themselves.” In this, he seems far less of a pedagogue to his students than an older brother.

Driggs admits that music instruction has changed drastically over the last 10 years, largely through developments in technology. Rather than seeking a live teacher, a growing number of persons learn via YouTube videos. Driggs remains accepting and upbeat about the current state of guitar instruction. For Driggs, the guitar is a virtually unlimited instrument, and a single song can be approached in a wide variety of ways. “The point is never to memorize a song note for note, but to stay open to new possibilities, always have fun and never get bored,” he says. One of the new technologies of which Driggs is particularly fond is GarageBand. Before music went digital, Driggs would encourage his students to play along with themselves by means of cassette tapes. While this was effective, Driggs is enamored by the new possibility of “becoming your own backup band.”

In the past, Driggs has played, recorded and toured with numerous bands in almost every conceivable style. These include jazz, his primary mode of expression, but also rock, country, bluegrass and other forms. Driggs spent much of his life on the road in the ’80s, particularly in new wave bands. One of Driggs’ most memorable contributions to local live music was Dimestore Deacons, which he formed with KRCL talkshow host Lara Jones and local musician Dan Salini. At present, he is focused on writing songs and recording tracks for individual release. “They are more Latin-based than things I have done in the past, more based in rhythm,” he says.

Kim Driggs continues to teach at Acoustic Music Studios (845 E. 400 S.) in downtown Salt Lake City (acousticmusicutah.com). Driggs is indeed an inspiring mentor and warm personality. While there is a small waiting list for new students, inquiries are always welcome.

Editor’s note: The penultimate paragraph previously stated that Driggs was in local neo-swing band Atomic Deluxe, which we’ve corrected to say Dimestore Deacons, and Dan Salini has been added.