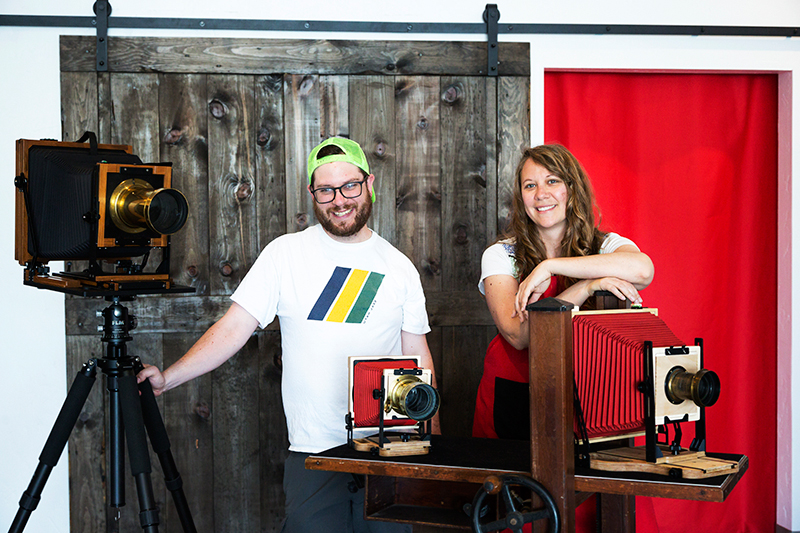 Luminaria is one of the newest installations to Salt Lake City’s blossoming arts community. A photo lab that specializes in alternative process photography, it began earlier this year in February as artists and partners Christine Baczek and David Hyams (and their dog Bandit) made the decision to focus their passion for alternative photography into an outlet that they could share with the greater community.

Luminaria, a specific name for a paper lantern, is a fitting title: Light behind the paper broadcasts cursive and otherworldly shapes and patterns. Some of the alternative processes on display here include digital negatives, platinum palladium and master wet plates. They look to move away from the status quo, both those rooted in archaic notions as well as technological patterns.

One unique aspect that Luminaria brings to the Salt Lake arts community are workshops where interested parties can get hands-on experience with alternative processes and learn beside both Baczek and Hyams. One such workshop is their aptly titled “Crafternoons,” which are smaller projects that they hope the participant can start doing at home. Another is their “Photo Safari,” which consists of Baczek and Hyams accompanying the participants on an outing—either around, down, or up a nearby canyon or trail—in which participants receive shooting tips and then return to print the images in a specific process. They also offer private classes.

Baczek and Hyams met in 2009. Both are humble, bright-eyed and enthusiastic individuals who bounce off of one another naturally, their personalities complementing one another just as much as their artistic processes and dedication to the arts do. They are each passionate about the creation of images and the process behind it, finding ways to bridge the actual elements of the environment and the developing process itself with their unique voices and visions.

Luminaria came about quite organically, originating as an idea before the partners had the opportunity to fully realize that idea and turn it into an actual brick-and-mortar shop. They previously spent a year in China building a photo lab, along with a gallery. “It was fascinating. We didn’t go looking for jobs in China. It just fell into our laps,” says Hyams. “[The opportunity] came at just the right time. It was this gift, and it enabled us to live in a very different culture, an experience that I never anticipated.”

Hyams, originally from New England, is heavily influenced by the landscape and environment that surrounds him, focusing a certain energy on natural resources and how humans both shape and draw from those things. “My first exposure to the West was through books and through photography,” he states. “I have always been interested in how people have made the landscape.” A large selection of his work portrays other photographers and spectators gathering around iconic natural monuments in the West, working to show how this sense of human-voyeurism toward our surroundings defines these landmarks.

“I am fascinated by the West, so a lot of my photography examines the relationship with just the land,” he continues. Carefully decorating the wall are photographs of blurred, ghostlike figures littering an otherwise picturesque landmark. Perhaps Hyams’ trademark style, the figures’ features and presence are morphed by these alternative processes, creating otherworldly images that evoke nostalgia and an almost dreamlike state. “When I found traditional analog photography, it linked the technical side to the creative side,” says Hyams. Hyams’ prints on display at Luminaria are a magical rendering and representation of both human intrigue and engagement with the natural world as he sees them, this vision seeping out in the creative process. “The process is not as much a hurdle as it is something that exponentially increases the connection to the artwork, that has been a very special experience,” he says about the approach to his work, “and I hope to do it for the rest of my life.”

Baczek’s work, alternately, is also quite rooted in nature and heavily processed, perhaps more so than Hyams’. “My work has a lot to do with what is going on in my life,” she says. “My [past] job was a fairly sterile one; I was not allowed to be influenced by it. I did a

body of work where I was documenting negatives, printing them and manipulating them using chemical processes. Using this chemical process to express myself is really fun. That is what I am drawn to, mostly.”

Her work also lines the walls: a photo of her shadow, desolate and plaintive yet evocative scenes of a New Mexico lifestyle, a life lived among the heat and expanse of the high desert. Having studied photography at the University of Utah and lived in myriad settings, it’s difficult to pinpoint a time or place in Baczek’s prints. The photography process and her unique style offer a timeless yet very diaristic display. The prints are a plainsong of sorts to images of the past.

The space that Luminaria occupies is a remodeled cupcake shop nestled next to a barber shop and frameshop in Salt Lake’s underspoken and unique niche just west of State Street on 800 South. The interior now is a night-and-day difference from the colorful sweets that used to be sold there. The shop exhibits a large collection of equipment, from lenses to printers and plate presses, the walls checkered with ethereal and ghostly prints. The room echoes with the friendly voices of its owners and resident artists, accompanied by their cuter-than-life shop dog.

When asked how one would go about getting involved in alternative process photography and view both of their work, Hyams says, “I would say, just come into the shop. Get your hands on it. Photography is a very tangible, tactile experience. It’s one thing viewing it online, and it’s another thing to sit with it and work with it.”

Check out Baczek’s and Hyams’ work in the respective galleries below and find more information about Luminaria at luminariaslc.com.