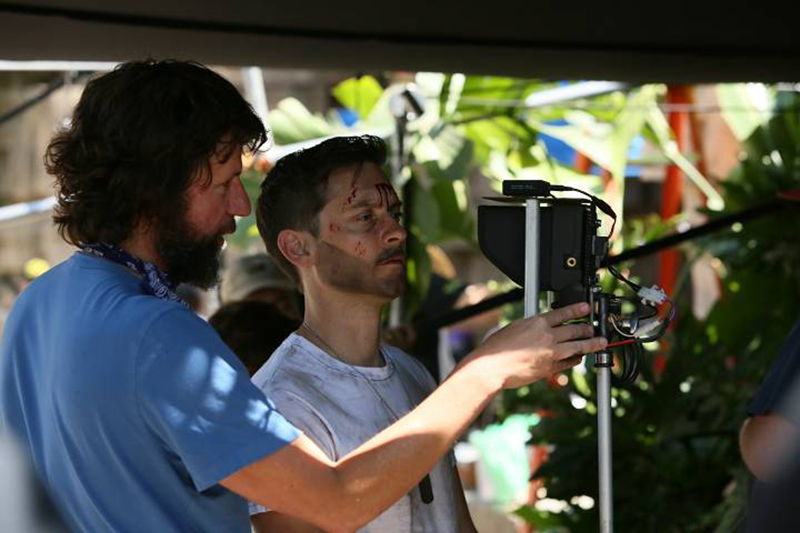 Matt Piedmont and The Spoils of Babylon

With so much short, bite-sized comedic content at your fingertips, it’s a rare experience to find something that is not only wickedly funny, but also artfully done. Funny or Die, a little comedy website once hidden to the masses, has joined IFC to bring the best jab at all of the art films and pompous directing I had to sit through for years in film school. The Spoils of Babylon is the film lover’s film and the comedy lover’s comedy, combining a passion for the greatest years in cinema with quite possibly the funniest cast ever assembled. This episodic mini-series spans multiple decades and genres of cinema, with extra points for its humor and sass. SLUG was lucky enough not only to get a sneak peak of the fully released mini-series, but also to pick the brain of one of its co-creators, Matt Piedmont.

The project came together, as all the best do, in a completely serendipitous and out of the blue fashion. Piedmont was visiting an old and new bookstore in Portland, Oregon, and noticed that they had many of the old ’70s tomes “that were hardbound and huge, like three phonebooks glued together,” he says, with over-the-top, illustrative dust jackets. “I just started laughing out, loud and just as a joke, like we do all the time, I said, Oh we should do a mini-series like this. You know, like a Thornberg’s mini-series —fake one—and we should call it Spoils of Babylon,” Piedmont says, “I was trying to add my own title that was grandiose but seemingly meaningless.”

Piedmont and co-writer Andrew Steele had worked with Will Ferrell in the past on the 2012 short Casa de mi Padre, and Piedmont was a writer on SNL from 1996–2002, so the pair already had some “unusual stuff on their track record,” he says. Together, they pitched the sweeping ’40s to ’70s comedy period piece. “Understandably, when you pitch something like, that it was like, ‘How would this even be possible?’” says Piedmont. “What is the budget, 200 million dollars? We’ve got five bucks and a Slimjim for you.” After delving into the concept and low-budget options, IFC was actually very supportive of the endeavor and gave the project the green light.

Once they pitched the idea, Piedmont and Steele wanted to combine and throw different things into the comedic blender. “There’s a lot of influence and a lot of weird things in there,” says Piedmont. “It’s always kind of an excuse that once you sell it, just to try to add a bunch of stuff into the blender and try to have fun with it.” This included references to old-art cinema, larger-than-life Hollywood figures, old played-out tropes, editing tricks and beat-to-death clichés. Once in the mix, though, it was a perfect satirical rollercoaster ride that any cinephile could appreciate. “I get giddy about that stuff, too. That’s fun just for the small percentage of the people that would actually get all of those reference,” says Piedmont, who adds that he also purposefully mixed in some silly slapstick, Bugs Bunny–esque jokes and gags. “The trick is also to make it where you can get some joy out of it, but for people that don’t know the references, they can still go on for the ride,” he says.

The joke is that the overblown mini-series was “cut down from the original 22 hours” and is hosted by the fictionalized author/producer/director who set out to make one of the most highbrow epics of all time. The Spoils of Babylon satirizes the sweeping, made-for-TV epics of yesteryear with the likes of Will Ferrell, Kristen Wiig, Tobey Maguire, and Tim Robbins among an impressive cast. Clocking in at just over two hours in length, the mini-series spans from the Great Depression through the beatnik ’50s and concludes in the sepia-soaked early ’70s. The show is hosted by the adapted novel’s author-slash-director-slash-producer-slash-actor, Eric Jonrosh (Ferrell), who is a pretty accurate skewing of Orson Welles in his last years (Ferrell in a fat suit), with an added sprinkle of Stanley Kubrick eccentricity. Piedmont points out that all of Ferrell’s dialogue was masterfully scripted, and shot in a single day. “Welles is a hero of mine,” he says, the “architect of his own demise” appealed to Piedmont, and he and Ferrell created an honest and loving tribute to the late actor and filmmaker. “I don’t think we could do it if we didn’t truly kind of love Welles, for all of his faults too and I think Will kind of nailed it.”

As Jonrosh progressively consumes more and more wine, he becomes increasingly belligerent to the TV crew while still trying to outdo his own artful verbosity (see what I did there?) to bring his masterpiece to television. Filmed in the late ’60s and early ’70s, the Jonrosh character is now, years later, a washed-up has-been alone in a restaurant, berating the film crew as he introduces each chapter of his epic. The running joke is that he’s got no limit to his over-drawn and pompous style, conjuring up everything from Gone with the Wind, French art-house films and everything awkward about the ’60s technicolor hippie culture. His monologues ramble on, the death scenes are never-ending and even an inscription on a pocket compass takes several minutes to read out loud. Jonrosh then clues the audience in on the drama behind the scenes and candidly admits that he “slept with every single cast member.”