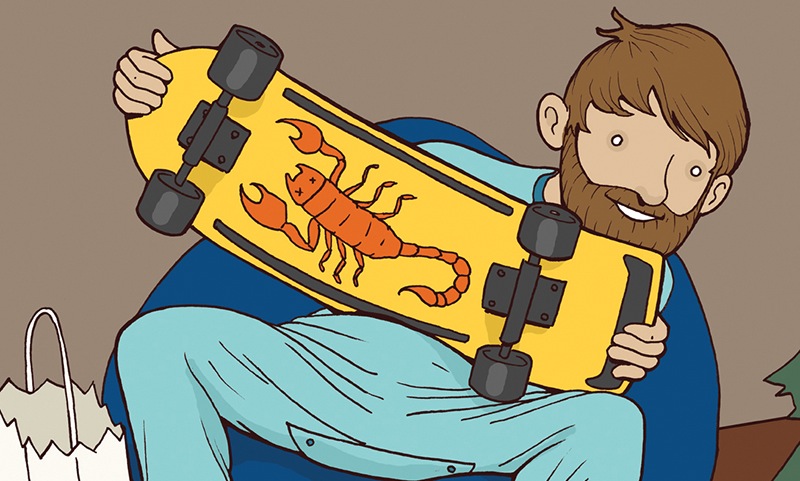 To me, the true meaning of Christmas is getting presents. All of the other Baby Jesus stuff and loving thy neighbor and spending time with the family? Shit, man, I can do that any other time of the year. I don’t need some invisible Christmas spirit to do that stuff, and as far as I can tell, the Christmas spirit never used its credit card and waited in line at Toys “R” Us to get me a new Big Wheel when I was a kid.

Nope, Santa did. That is, until (SPOILER ALERT!) my parents told me that Santa wasn’t real. It was kind of like them finally having the sex talk with me—awkward for them, that is, but I didn’t really care that Santa had died or that a penis in a vagina made a baby. If I recall this sweet childhood memory correctly, my initial reaction was, “Santa’s really you guys? Cool, do I still get presents?”

This solidified my firm belief that Christmas is, first and foremost, about unwrapping boxes of delight and making a mess. When I found out that Jewish kids get, like, eight Christmases, I immediately wanted to leave the Mormon faith, at least just for December. But that was not an option. Fortunately for me, though, my parents got divorced—which ultimately meant that for a majority of my childhood, I got not one, but TWO Christmases!

That said, I would now like to offer some tips to kids from split-up homes—who grew up like I did—on how to maximize what I simply like to refer to as Dual Christmas. Getting double the presents might not make up for the crippling abandonment issues and deficiency in creating functional relationships later on in your life, but it doesn’t hurt.

First off, I would like to apologize to all the kids from single-parent or non-divorced homes that will never get to bask in the joys of celebrating Dual Christmas. The Christmas spirit is urging me to say that someday—maybe someday—you can have kids and get divorced and pass on the beautiful tradition of giving them two Christmases. You see? There’s a silver lining to every shitstorm.

Now, I don’t know how many little kids read my articles, let alone kids who have to put up with the repetitive Weekend Dad routine. Regardless, we all know a kid in a divorced household(s) anyway, so let’s talk about the real issue at hand: how to maximize your present receiving. I inadvertently learned a few tricks growing up, and I feel that it’s my Christmas-spirit duty to share them. Because you know what’s better than one brand-new bike waiting under the tree? Two new bikes waiting under two different trees.

The first thing to realize, divorcee kids, is that your parents will most likely become competitive with each other during and after a divorce. They’ve just gotten done competing over who gets the house and the cars, or who’s the most competent in front of a judge, so don’t forget for a second that they will do this over again for your affection. This can be one of your greatest amounts of leverage for getting extra presents.

A great way to do this is to make two separate Christmas lists. Make sure you make one way longer than the other one, and give the longer list to Weekend Dad. Chances are, he’s feeling some amount of guilt for not being around as much, and this is great pull to get a few extra Xbox games in your stocking. Another thing to keep in mind is to look past Weekend Dad’s shitty apartment he’s forced to live in now. Although it lacks decorations and most likely has a 3-foot plastic tree instead of a boisterous blue spruce, this only means that he may have more money to spend on you at the time. (Unless he’s giving your mom a shit ton of alimony—in that case, give the longer Christmas list to your mom.)

Most likely, the Dual Christmas plays out like this: Christmas Eve, you will be at Weekend Dad’s, opening his presents from your inflated Christmas list. He most likely will one-up Mom presents-wise the first year after the divorce. BUT, make sure you don’t get mad at Mom for not stepping up. Divorced moms have long, long memories. And the next year after that, you are almost guaranteed she will one-up Dad, so, make sure you give her the longer list next year.

Another cool advantage to Dual Christmas is getting your presents early. All it takes is telling your mom something along the lines of, “Well, Dad said I could have some presents on Thanksgiving …” I got to use a snowboard when the season started instead of having to wait till Christmas Day by using this tactic.

Of course, each divorce situation can be different from mine. You may need to derive different plans of attack for Dual Christmas, depending on your situation. Maybe you don’t go for presents and go straight for some cash. Either way, I hope you all enjoy your Dual Christmases—twice the gingerbread, twice the eggnog and twice the presents. Like I said, that’s what Christmas is really about.