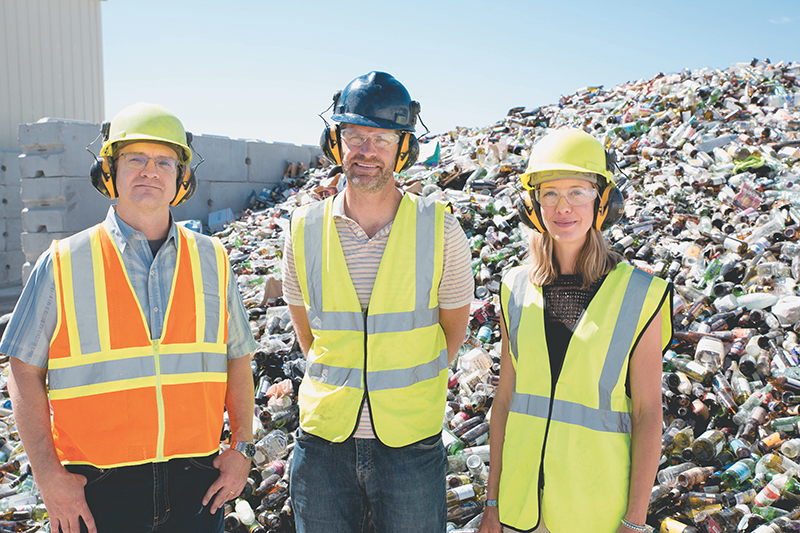 SLC citizens are an environmentally responsible lot, by and large. We have a lot of environment to be responsible for! Recycling is a major part of that responsibility, and we’re all happy to do it at home, but our big blue bins are only part of the story. Momentum Recycling opened its doors eight years ago with the goal of providing local businesses with the same recycling services that are available at home. “If you were a business in 2008,” says John Lair, President of Momentum, “and you wanted to be as green as you could be, you either had to collect the stuff yourself in your office and take it home and put it in your home recycle bin, or nothing. You had no service provider, and we were the first to start that.”

Lair, previously an I.T. entrepreneur, was the first to step in and do something about this significant gap in our city’s otherwise environmentally responsible ethos. He petitioned husband-and-wife team Jeff and Kate Whitbeck to help make his idea come to life. Ardent community organizers, Jeff and Kate dove into the project; Jeff became VP of Operations, and Kate VP of Sales. At the outset, despite a passion for their cause, the Whitbecks knew very little about running a recycling business. “When we first started the company, I got a commercial driver’s license, and we literally went through YouTube videos to learn how to operate the truck,” Jeff says. Kate struggled with the sales aspect as well. “You meet all types, and not everyone cares,” she says. “In the beginning, I just assumed everybody needed and wanted recycling, and that everyone thought the way I did! I’ve since learned that’s not the case … but it’s also incredibly rewarding when you connect with someone.”

Since then, Momentum has grown to a modest but effective operation of seven trucks and 25 employees. “We do see ourselves as a small business,” says Lair. “As managers and owners, we wear a lot of different hats—you know, we’ll literally vacuum the office the same day that we’re negotiating a contract with the … City.” Lair and the Whitbecks don’t run a recycling business to turn a huge profit. They do it for the good of their community—and doing good is always hard work. “We’re frequently out back assembling bins or trying to figure out how to fix a truck,” says Jeff. “Tomorrow, we have a waste audit—it’s the nastiest of jobs, [and] everyone’s getting their hands dirty.” But being a small business has its benefits. “We also have this family-like atmosphere in our staff,” says Lair. “Most of our staff have been here a long time, and we’ve seen each other’s kids grow up—there’s a lot of strength that comes from that … in a company as small as we are.”

In 2012, Momentum underwent a major expansion. They installed a giant, fancy, new processing plant on-site and began providing the residential sector with curbside service for the one thing we can’t put in our big blue bins: glass. As Lair says, “[Utahns] didn’t even have an option to recycle glass before building this facility.” Locals have responded well to the service, but there‘s still a great deal of work to be done. “Four thousand three hundred households are signed up for the program,” says Jeff, “and the plant is only a third to a half of its full capacity, and it’s not yet profitable, frankly, so we absolutely have to get a lot more glass … so it can pay for itself.” Residents can sign up for this curbside glass pickup through SLC public utilities or at momentumrecycling.com. It’s $7 per month, they send you a bin for the glass, and the charge comes on your utility bill.

To get more glass in their facility, Momentum emphasizes educating the public. Knowing what and how to recycle is useful, but knowing what exactly happens once the bin leaves your curb can be a major motivator. “We have a regular public schedule of plant tours,” says Lair. “Come on out and see it! Let us show you what we do everyday with this material.” But Momentum doesn‘t just want more of our business—they want real change.“The focus from the start for us was behavioral change,” says Jeff. Kate adds that “the big-picture goal should be reducing consumption, you know? So [we work to] educate the population so we’re not creating … so much disposable waste.”

The existence of residential curbside glass recycling is an important step for our city, but in terms of the volume of unrecycled waste, businesses are the biggest offenders. “Residents have been doing the bulk of the diversion, and yet businesses aren’t doing their share,” says Kate, “so in some ways residents have been subsidizing businesses’ waste habits!” A new public ordinance that will take effect in 2018 aims to change that. “Any business that [meets minimum size requirements] will be required to divert at least 50 percent of their waste stream,” says Kate. “Businesses will take part, and share in waste diversion, and in extending the life of our landfill … so it’s definitely a positive thing.”

If you’d like to get involved in helping Momentum improve our city, volunteering opportunities are available. “We have a program called the AmGlassAdors,” says Lair. “We have a range of opportunities … and we’re always looking for people who are motivated.”