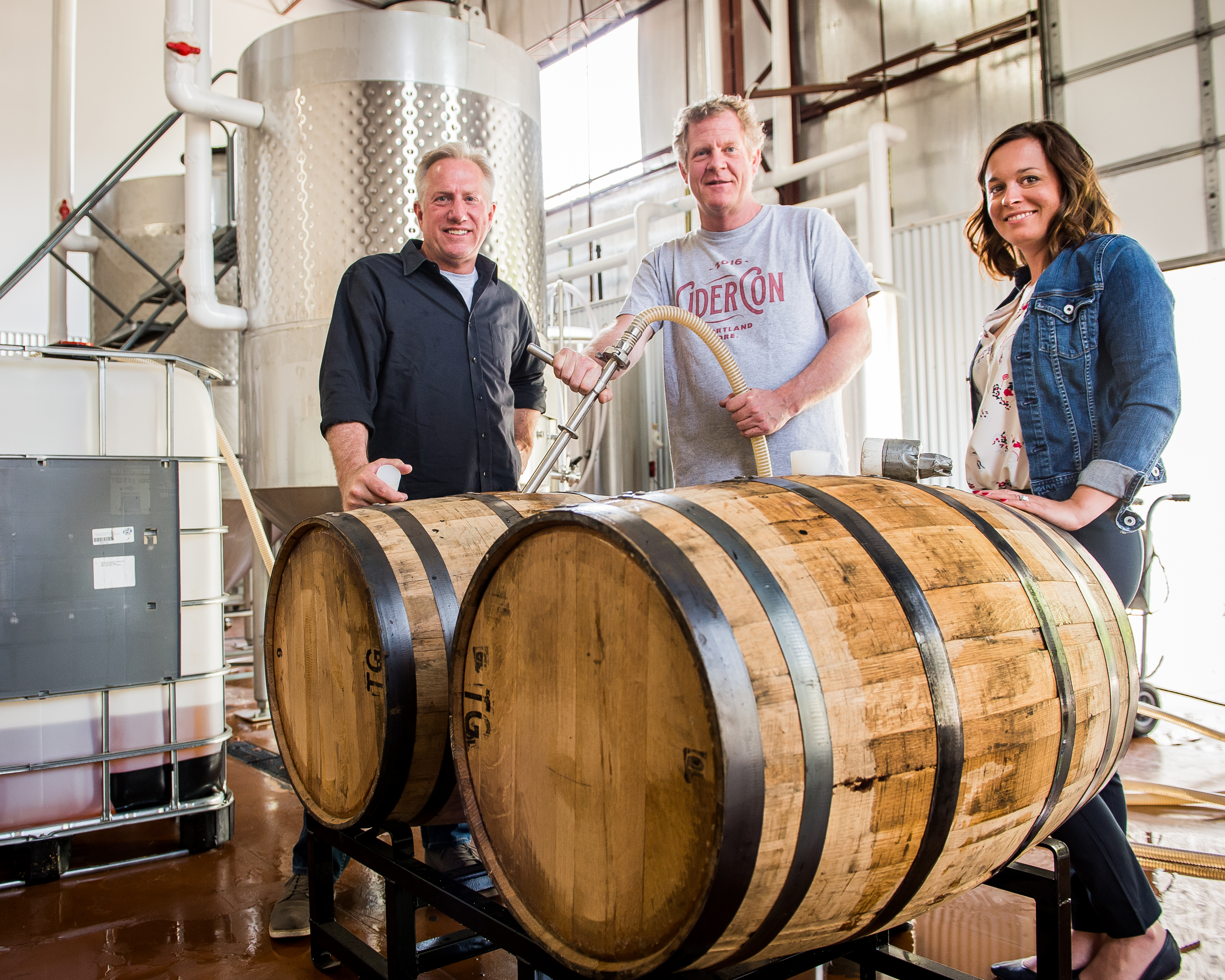 I’m very much aware that this is SLUG’s Beer Issue and not the Cider Issue, but ciders and beers go hand in hand across the globe. They are the two most popular beverages in the world, beer being No. 1. Though they have their differences (apples versus grain), the ever-changing and evolving nature of North America’s craft-brewing movement is bringing these two seemingly different quenchers closer together than ever before. Mountain West’s Head Cider Maker, Joel Goodwillie, has been a working vinologist and winemaker for half of his life. “I primarily got my education in wine from the Gallo family,” Goodwillie says. “The Gallos changed America’s wine culture in the ’70s, making wine more approachable to a wider audience.” Goodwillie’s knowledge of fermented fruit didn’t end with grapes. Growing up in the heart of the Northwest’s apple country gave him access to tree fruits that would start him on his next journey: ciders. “Ciders were a natural progression for me,” Goodwillie says. “I’d always enjoyed them and I had a knack for making them, but after a few years in the cider business, I decided to sell and concentrate on my wine vineyard in Washington and make a fresh start somewhere else.” However, because his vineyards don’t require his full attention, Goodwillie was looking for a new challenge.

Coincidentally, many hundreds of miles away in Salt Lake City, owners Jeff and Jennifer Carleton—two Philadelphia transplants—were looking to start their own cidery. “On a trip to Ireland a few years back, I got to know ciders that I’d never known existed,” says Jennifer. “I wanted to be able to have access to these kinds of ciders, and Salt Lake was virtually an untapped market for them. My husband, Jeff, and I agreed a cidery was feasible—we just needed a knowledgeable person making them.”

Goodwillie and the Carletons came together serendipitously from an online ad. After weeks of phone interviews, Goodwillie made his way to Salt Lake for the first time. “My first experience with Utah was absolutely perfect,” Goodwillie says. “The weather was perfect, the people were friendly, the city was buzzing with art and food. I was blown away and fell in love with Salt Lake within hours of arriving.” As far as the Carletons were concerned, the feeling was mutual. “Joel was a perfect fit,” Jennifer says. “His knowledge and enthusiasm was exactly what we and Salt Lake needed.”

With a fresh perspective and environment in which to work, Goodwillie began crafting what he thought would make the ideal cider for Utahns and our climate: Ruby Hard Cider. “For this climate, it’s all about drinkability,” Goodwillie says. “You don’t want a cider that’s too sweet or too boozy. It has to carry you through to the next sip without getting you too smashed or making your mouth feel sticky.” From a beer-drinker’s perspective, ciders can seem a little one-dimensional. After sampling some of Joel’s experiments, however, it became obvious to me that craft ciders are not too far out from the spectrum of craft beers. “You can do odd things—like add coffee, fruit or cocoa nibs—to beer and cider and get away with it,” says Goodwillie. “Just like craft beer, there are a lot of opportunities out there right now to be unique … We’re teaming up with a local coffee roaster to experiment with the infusing of espresso with cider, which is getting an enthusiastic response from the restauranteurs we’ve approached.” The experiments don’t end there. The owners of Mountain West see no limitation on what can be achieved: “We’re doing the same with a local chocolatier,” Jennifer says. “We’re looking at infusing their cocoa into small-release batches that we’ll sell at the cidery.”

All of this outside-of-the-box type of thinking is great for limited batches of cider, but when it comes to innovation while melding with craft beer

drinkers, you need a wholly different flavor dynamic. “We’re going to hop a cider,” Goodwillie says. “Hops in cider is the perfect way to bridge the beer gap.” Luckily, Goodwillie and the Carletons have created a great friendship with their next-door neighbors at Red Rock Brewing Company. “The guys over there really know their hops, and they gave us some great recommendations on what we should use,” Goodwillie says admiringly. “That first test batch of hopped cider was right in line toward what I was looking for. I could spend months or years looking for the right hop varietal, and they just knew.”

Goodwillie made a point to show me some old whiskey barrels that he had stashed in a corner. “I’ve been looking into starting a barrel program here at the cidery,” he says. “I’d like to experiment with making the cider equivalent of an oak-y Chardonnay. I’ve also been experimenting with barrels of locally made whiskeys, trying to infuse those smokey, butterscotch and vanilla flavors into the ciders.”

When first walking into Mountain West, it was hard to imagine that one could impart the same creativity toward cider as with beer, but like any artisan craft, the only limit is drive and imagination. “We give Joel very little in the way of direction,” Jennifer says. ”He knows his craft, and we trust him to let his creativity fly.”

Mountain West’s Cottonwood Dry Hopped Cider will be released any day now, with their bourbon-barrel-aged Stillwater Hard Cider coming in the next few weeks. You can find Mountain West Hard Cider and their new 7 Mile Session Cider at 425 N. 400 W. in Salt Lake City. More information is available at mountainwestcider.com.