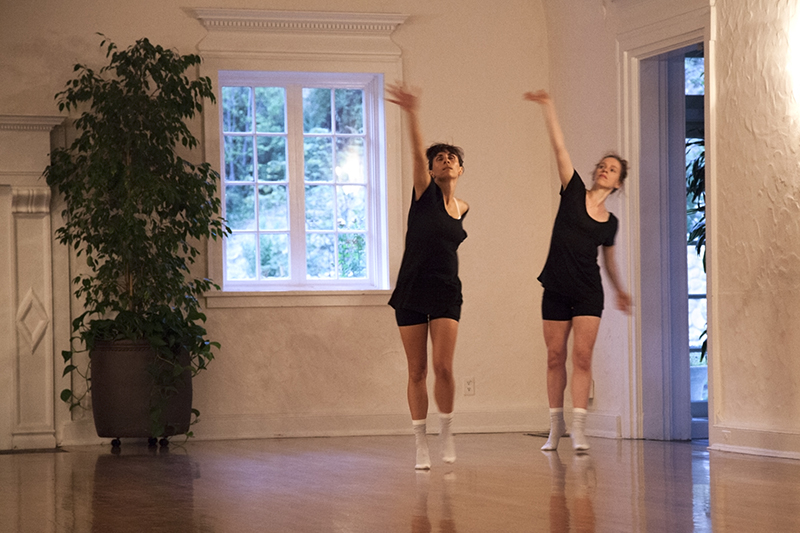 During Mudson’s final installation at the Masonic Temple, Breeanne Saxton—currently a guest dancer for Ririe-Woodbury through the fall season—performed an in-progress work that dealt with processing a death in her family. By the end of the piece, Saxton folded up small but precious objects into a towel and smashed them. The piece was well received: The work was deeply personal and unconventional, and it provided a fitting way for loveDANCEmore’s Mudson to bid adieu to the Masonic Temple and enter into its 2015 fall season—and its fifth anniversary.

Inspired by New York’s Movement Research at Judson Church, Ashley Anderson founded Mudson in 2010 as a monthly and free event for local choreographers to showcase their in-progress danceworks. “Since we started, we’ve seen a great deal of growth and have managed to keep our model sustainable,” says Anderson. “We’ve been able to support more people than I could even imagine otherwise meeting or interacting with.”

As part of the loveDANCEmore community events branch of the Ashley Anderson Dances nonprofit, Mudson provides an important and necessary platform for dancers and choreographers of all backgrounds and styles to perform and cultivate their pieces. With each choreographer who introduces herself and her work, the environment becomes much more open, bridging the disconnect between performer and audience and debunking expectations of what a dance performance should be. Audience members are able to appreciate and interact with varied representations of fresh and cutting-edge works from the local dance community; choreographers are able to try out their ideas, to gauge where a work might fail, to take risks, to sense the physical feedback of their audiences and then to further develop their works. Anderson, the eponymous founder of Ashley Anderson Dances, references one particular moment with dancer/choreographer Samuel Hanson, who planned to send messages to his audience by throwing them paper airplanes during his performance. When he tested his idea out during Mudson, however, it turned out that flying paper planes is not an easy thing to do. “It was a really amazing moment,” says Anderson. “In dance, if we don’t try out our ideas, we can’t figure out where they fail. I have to have people to experience the show, to give me that physical feedback.”

Now that it’s in its fifth year, Mudson has left its space in the Masonic Temple and is in the process of testing out a few new venues—including the Memorial House, the Wasatch Presbyterian Church and the Sugar Space Studio for the Arts—before settling into a new home. “At the Masonic Temple, it felt like anything could happen,” says Anderson. “We’re trying to re-create that magical feeling.” The primary concerns are logistical—whether or not the lights might blow a fuse, the floor is suitable to dancers’ bodies or if the dance feels right in the space. The more logistically accommodating the venue, the more room for experimentation, and the more Mudson can continue to grow and meet the needs of the community.

Along with a new physical space, this five-year milestone presents a chance for Mudson to re-examine how it might better support the choreographers and dancers involved. Along those veins, this year’s application process touts a few changes. Rather than setting seasonal deadlines, this series will have rolling applications and a stronger curatorial presence. Because Mudson is moving from venue to venue for each performance, the administrative staff has to make quicker programming decisions, as opposed to their typical practice of consulting an artist panel. Once Mudson settles into its new dance space, however, Anderson hopes to return to having a larger application process, seeing as Mudson is one-of-a-kind in its incorporation of a year-round open application process. “There’s no other organization or dance model that has people working on projects in an independent or freelance way to be presented,” says Anderson. “Having open applications allows us to present new voices who we wouldn’t otherwise have been able to support.” As an umbrella organization that facilitates all types of dance projects, loveDANCEmore is in the unique position of reinforcing the fact that there is absolutely more than one way to exist in dance—working project to project versus dancing in a company, for example—and meeting new ways of thinking, creating and seeing with energy and enthusiasm.

That sense of support, of uplifting the dance community, has been especially important for Anderson, who started the series when she had just moved back to Salt Lake. “I wanted to make a series that I could participate in, a type of series that I felt didn’t exist yet,” says Anderson. Over the years, Mudson has fostered dynamic performances that embrace unfinished rather than finished products, and it continues to confront and dismantle preconceptions of dance—of something being not academic enough or too traditional or not correct—for those both within and outside of the dance community. “It’s just wanting people to make the choice to create, and then respecting that choice,” says Anderson. “I’m grateful that all of these things could happen in the same space.”

Upcoming Mudson performances will be on Sept. 15 at the Wasatch Presbyterian Church and on Oct. 20 at the Sugar Space Studio for the Arts. The first performance of the season took place Aug. 18 at the Memorial House. For more information about Mudson’s programming and applications process, visit
lovedancemore.org/mudson.