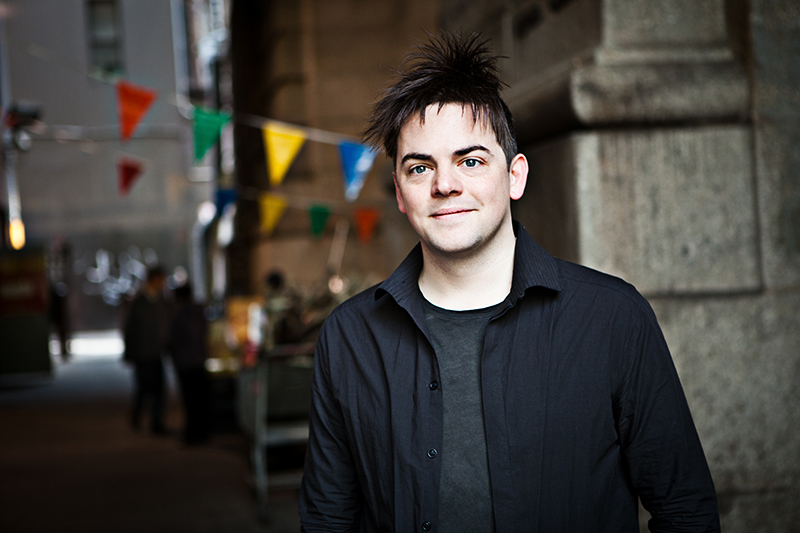 Nico Muhly & The Utah Symphony: Peeking In On A Process

Each season since his ascendance to conductor, Maestro Thierry Fischer has included a contemporary classical composition in the Utah Symphony’s programming. To commemorate the Utah Symphony’s 75th anniversary this year, Utah Symphony Utah Opera (USUO) commissioned three American composers to write scores for the orchestra to premiere in the 2015 calendar year: Augusta Read Thomas, Andrew Norman and Nico Muhly, each of whom Fischer chose personally. With regard to marking the occasion in this way, Fischer says, “An anniversary is not an end—it’s just a new beginning.” The live capstone to this triptych of commissioned-composition performances will be the premiere of Muhly’s “Control” at Abravanel Hall on Dec. 4 and 5.

Many seemed pleasantly surprised at the Utah Symphony’s premiere performance of Read Thomas’ commissioned “EOS (Goddess of the Dawn), A Ballet for Orchestra” this past Feb. 19. “EOS” was sprightly, light and warm—I noted its jazzy flavor, which contrasted with Beethoven’s impending Violin Concerto and Prokofiev’s Symphony No. 1 “Classical,” the bookending pieces. The audience had been given cards and pencils to mark their ratings of “EOS,” which elicited discussion about its success and what listeners liked or disliked. This seems to be exactly what Maestro Fischer aims to inspirit: “I do believe that the Symphony is not only a museum where you perform things everybody knows already,” he says. “I think the contact for both the audience and the orchestra with composers is something that brings … another, extra dimension to what the power of sound is about.” Fischer honors antique classical masterpieces and what they provide our culture—however, “I do believe, as programmers or music directors, it’s kind of a mission to promote today’s creativity and to give as much sense performing the new music as working under Beethoven’s symphonies,” Fischer says. Fischer views contemporary musical work as a means to stimulate areas of listeners’ perception that longstanding pieces may not otherwise. He also seeks to give an audience to today’s young composers creating work with modern sonic nuances.

Muhly, a renowned artist, took advantage of the USUO-contracted theme of Utah’s southerly landscape by accompanying the orchestra on their Mighty 5 tour of Utah’s national parks last year. Muhly illustrates the parks’ “interactive state” with people—whether it be early settlers’ industriousness in reaction to the severity of the landscape or our current stewardship to protect it—hence the name “Control.” Noting that an orchestra is a “big organism,” Muhly regards this commission as “a big orchestra piece with a bunch of zoomed-in sections,” he says. “It’s massive—it’s a very vertical piece of music.” In the five movements of “Control,” Muhly underscores particular instruments, citing a section “where all it has to do with is trombones” and “30 flutes and a glockenspiel going” in another section as examples.

Where Muhly considers viewing this “alien landscape” as the main activity by which to absorb it, “Control” simulates the human activity of “peeking in on a process” of expansive geology. “There’s a lot of movement; there’s a lot of gestural content,” he says. “There’s a lot of chunky things to get involved in.” That’s not to suggest that “Control” offers 1:1 aural representations of the landscape, but that the listening experience should be akin to “working the land” as early Utah settlers did to survive it. With other sections, however, “Control” will exhibit a “dramatically narrative” sense of itself to evince the virtual limitlessness of this natural process. “I’m really interested in creating unexpected sonic shifts where there’s something enormous and there’s something tiny, and they’re all coexisting,” he says.

Muhly met Fischer and many of the orchestra’s musicians (including MOTUS) last summer, around the time of the Mighty 5, and began to get a sense of “what they like to do,” as Muhly puts it. Once rehearsals start (the week of the premiere of “Control”), Muhly will attend each session and will “sit there and make myself useful,” he says. Although he aspires to have musicians play the score and “get the right results,” Muhly says that he finds it fun “being there and making subtle changes and getting your hands dirty a little bit,” working with the orchestra to prepare the score for its live performance.

At the time of this interview, Fischer had just begun working with Norman’s piece, “Switch,” a concerto for percussion with soloist Colin Currie, which premieres near the time of this article’s publication on Nov. 6 and 7 at Abravanel. Not wanting to reveal too much, Fischer describes his first impressions of Norman’s score as “fresh and shiny.” Norman’s, Read Thomas’ and Muhly’s commissioned works each will have been recorded at their respective premieres for a CD that USUO will release next spring, near the time the Utah Symphony orchestra performs Percussion Concerto “Switch” at Carnegie Hall on April 29. Muhly’s tickled about the CD—“You’d be surprised, actually—in a lot of cases, you don’t get [a recording]!” he says, revealing that a composer might even work on a piece for years, and nobody will record it. Muhly has no qualms about recording “Control” at its premiere—“The first time something happens is the best time to document it,” he says.

Additionally, “Control” will include a video installation by Josh Higgason, which Muhly mentions will function as a visual counterpoint to the audial score and will show images of Southern Utah. Its premiere takes place on Dec. 4 and 5 at Abravanel Hall to complete the live-recording leg of this anniversary-commission project. “This should be a galvanizing step forward,” Fischer says.

Editor’s note: This article previously mentioned that it was Abravanel Hall’s 75th anniversary, but it’s actually the Utah Symphony’s 75th anniversary. It also now indicates that each commissioned piece will have premiered in 2015.