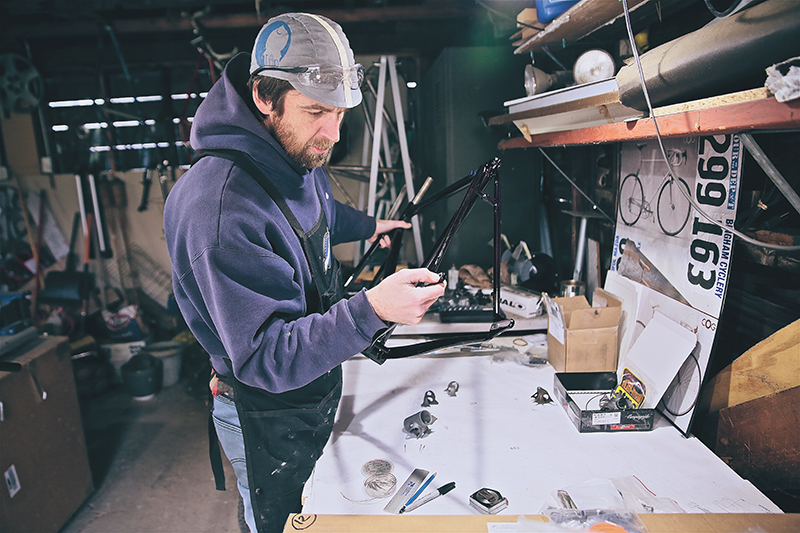 Not Another Cog: An Interview with Matt Nelson of Saltair Cycles

There’s a well-known study among cognitive psychologists in which participants are asked to draw the basic features of a bicycle. Even the participants who owned a bicycle flubbed the test, sometimes connecting the chain from the back wheel to the front. Not surprisingly, most rated their knowledge of bicycle mechanics quite highly before taking the test. Luckily for me and you, Lenny, we don’t have to know where the handlebars go, because there are people like Matt Nelson, owner and sole employee of Saltair Cycles, who are more than happy to indulge our ignorance.

In 2011, Nelson attended the United Bicycle Institute—or UBI—in Portland, Oregon, and has been building bikes ever since. “I didn’t know that I was going to go to UBI, build my own bike, come back and want to build more,” he says. “I came back and I was like, ‘I wanna build more bikes.’”

Following the breadcrumbs of the Internet, Nelson became interested in a type of bicycle racing called cyclocross, a timed sport in which riders follow a closed course with terrain ranging from mud and pavement to barriers where the racer must dismount and clamber over. He tells me that the sport is much more spectator-friendly than are other brands of bicycle racing. “People will come and drink beer, heckle the racers,” he says. “It’s just kind of a culture”—a culture, he tells me, that’s already sweeping the Northwest and gaining popularity here in Utah.

Nelson liked the sport so much that he began building cyclocross bikes using a technique known as brazing, in which he connects the steel tubes of a frame by heating them to a glowing-hot temperature. Nelson, who has just finished his fifth season of cyclocross, says that he has already built bikes for some of Utah’s most competitive racers like Reed Wycoff, Richard Knutson, Ali Knutson, Joe Waters and—currently in progress—Rich Caramadre of All Systems Fail. “All of the club racing, that’s been my grassroots marketing,” he says, adding, “I’ve never raced on anything that I didn’t build.”

Nelson works exclusively with steel, as brazing can only be done with ferrous metals. This cuts some of the lighter materials, like aluminum and carbon fiber, out of the picture. But Nelson isn’t worried, saying, “Steel has been tested … Steel-bicycle-tube manufacturers have continued to push the technology of steel.” The necessity of hand-building makes steel-brazing an obvious choice for those who eschew mass production in favor of more local, cottage-industry goods. “There’s obviously the big bicycle industry, manufacturing overseas to drive costs down, but I’m not really competing with that,” he says. “If they’re coming to me, it’s because they want something unique.”

While cyclocross may sound esoteric or niche, if you’re living in an area with volatile weather, it’s actually quite practical. The cyclocross season traditionally takes place in the fall, when the weather gets wetter and conditions get burlier. To accommodate both the need for speed and maneuverability on hardy terrain, the cyclocross bike features dropped bars—same as road bikes, but with wider forks and a sturdier geometry. “Not everyone wants to race, but a cyclocross bike, for riding in different conditions, can be a good advantage,” Nelson says.

Nelson builds other kinds of bikes as well. He builds fixed-gear bikes, track bikes, touring bikes and hard-tail mountain bikes (this is beginning to sound Dr. Seussian, but you get the point). In fact, he does just about everything, excluding full-suspension mountain bikes and fat bikes. (I wonder if he’d build me a low-rider with purple, dangling tassels?)

Nelson’s general interest in bicycles started when he began riding rudimentary versions of the mountain bike in the West Hills of Portland, Oregon. His original sin turned into an abiding companionship that only intensified as the years went on. Before starting Saltair Cycles, and even before he built his first bike, Nelson found a way to ride one every day. “I went from commuting to work and being a two-car family to, ‘Can I commute to work and get rid of a car?’” he says. “Part of it was that evolution of wanting to be sustainable.”

With custom-made bicycle inquiries coming in at a steadier pace, Nelson was able to quit his day job as an architect to pursue his passion for building bikes full time. “The satisfaction of dreaming up a bike,” he says, “the process of designing it, making sure it meets the expectations of me or the customer, and then building it and seeing it ridden or riding it—it’s one of the more rewarding things I’ve ever experienced. [It’s] definitely more rewarding than being a small player in a big architectural project. In the rare occurrence that someone’s gonna want a custom steel bike, there’s only a couple guys you can go to in town, and I’m one of them.”

Nelson says that a bike typically takes two weeks to build, including the paint job. From start to finish, how it’s made, who made it, we’ve come full circle—or full tire, or whatever. That reminds me: Get that chain off of the front sprocket! Get your hand out of the spokes! Don’t be a dumbass—let Nelson build you a bike. Inquiries can be made at Saltair Cycles’ website, saltaircycles.com.