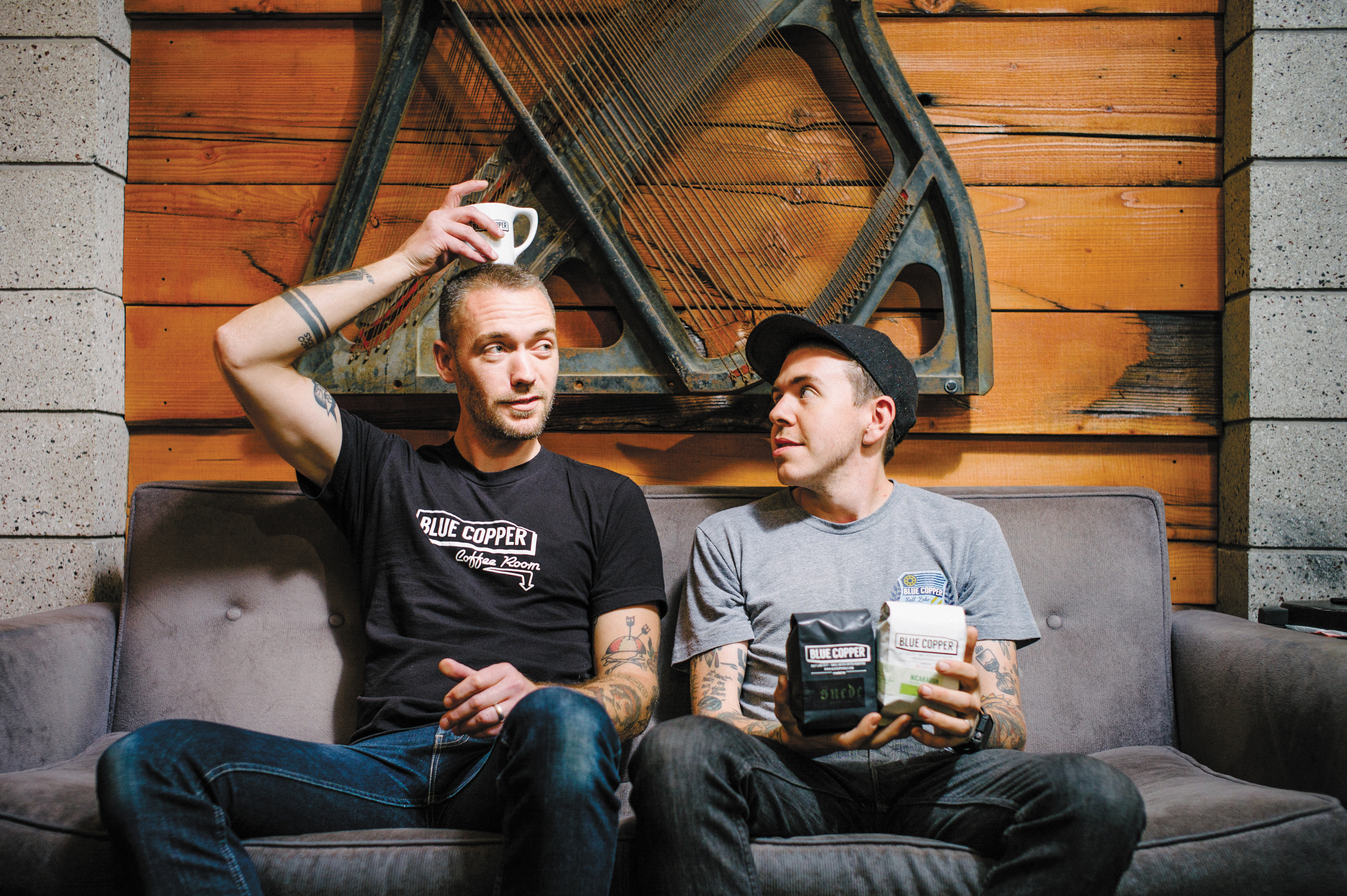 Perhaps it is the ever-present and always mentioned elephant in the room that Utah has a semi-theocratic government in which so-called “vices” are continually banned, hidden or discriminated against. But Utah is a damn good place to get a drink of any kind—including liquor, beer and coffee. So perhaps the powers that be should actually be thanked, as our tough political soil has sprouted numerous heavy-mettle beverage makers. One of those in particular is Blue Copper Coffee, which thrives despite doing business in a place where “people don’t drink coffee.” Utahns, of course, know that the opposite is true.

In 2014, William Lapthorne and Patrick Andrews combined forces in the location formerly known as Nobrow Coffee Werks, forming a partnership of the Central 9th–based coffeehouse and Utah-based roasting company. Lapthorne manages the coffeehouse, which is smaller and slower-paced than most people might be used to, while Andrews is hidden away roasting Blue Copper’s constantly evolving product offering. For years, they have successfully brought the highest-quality coffee from roasters all over the world as well as their own roasts, which have been met with much ballyhoo. Now, they are doubling down and only carrying their own acclaimed roasts from now on. “I felt like by just embracing our coffee entirely, it was an important statement,” says Lapthorne. “It says we’re not afraid. We don’t need to rest. You know, these other brands are not a crutch for us. We’re not worried that we’re not as good as these guys.”

After years of selling both their own product along with others, they said that going in-house-only just made good sense. “We couldn’t keep ours on the shelf,” says Lapthorne. “And I mean, from a really boring point of view, which is just numbers and all of that, you look at it and go, ‘You know, we might as well—let’s do what works.’” They relate that despite selling their product alongside the largest players in the industry, they were selling out of theirs. “We were selling 10 bags of ours to one bag of theirs,” says Andrews.

In the past few years, there has been an influx of coffee shops that are part of the third wave, meaning that they view coffee in a more artisanal way, like wine, as opposed to it being just a commodity. This makes the competition even stiffer, which makes Blue Copper Coffee’s success all the more impressive. It could be said that going all in-house is a brave move. “We were just super stoked on what we were doing,” says Andrews. “Not that we weren’t stoked on what everyone else was doing—there are tons of good roasters out there—but it made a little more sense when you walk in our shop, with our name above the door, that you see our product.”
Listening to them both talk about their coffee, it is easy to see why they have been so successful. They take pride in what they do, and they try to keep things interesting. “We were geeking out just yesterday in the car about our house blend,” says Lapthorne. “It’s a staple coffee. We don’t advertise it as anything but house blend, but, once a month, it’s a new batch. It’s a new blend of beans, and never the same thing, either.” He says their regular customers sometimes notice the change, and since it is always good, they appreciate the variety. Since the process and source of the coffee is so controlled, the taste notes featured in the coffee are all quite prevalent and can vary from hints of key lime pie, plum, fuji apple, allspice and nutmeg in one coffee to spice cake, peach and fresh ginger root in another. The experience, they are quick to mention, varies with each person’s palate.

For the month of December, they have a Rwandan coffee that they get through a company called Mercanta, which specializes in ensuring that the beans come from the farm and region advertised. Unfortunately, that is not the case for much coffee on the market. “That’s cool because then you know where your money’s going,” says Lapthorne. “You know that the farmer’s actually getting paid what they say he’s getting paid.”

They attribute their success selling their own roasts to a few things: “Salt Lake is really great at supporting local, so that’s helped,” says Lapthorne, “and frankly, Patrick does an amazing job with coffees—crazy good.” The two are a classic partnership. They pride themselves on the customer service experience. Visitors can ask their barista for suggestions and receive thoughtful and educated advice—which is much welcome when compared to some high-end shops rife with mean-mugging baristas who seem to hate the world. “We’re on first-name basis with people—their kids and their dogs,” says Lapthorne. “If I didn’t work here, this would be the coffee shop that I would want to go to. And I would appreciate those little details.”