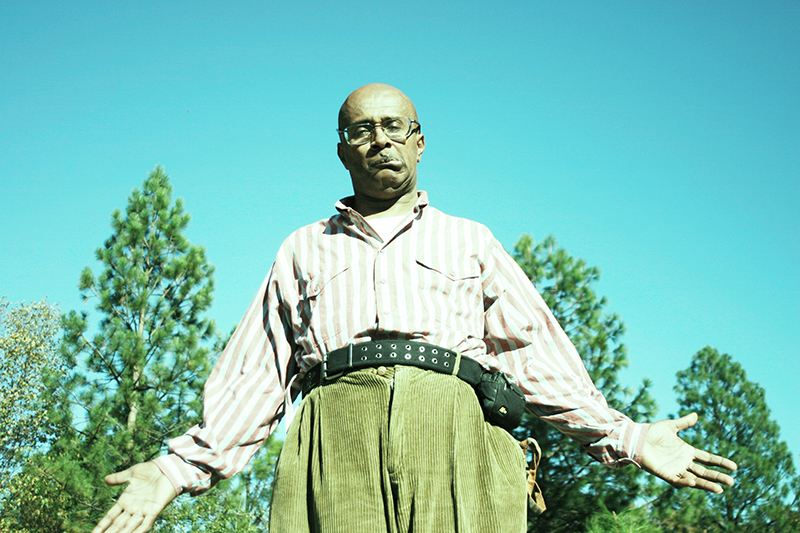 David Liebe Hart has a large following of fans from his appearances as one of the kooky cast of off-beat characters on Tim and Eric’s Awesome Show Great Job! That show aired on Adult Swim, showcasing his unique brand of songwriting, comedy and puppetry. He is a songwriter, comedian and street performer who is most well known for his oddball songs about aliens (“Salame”) and his dedication to his Christian Scientist religion, as well as his collaborations with other unique acts like James Quall (Tim and Eric’s Awesome Show) and Palmer Scott (“I Sit on You”). Liebe Hart is bringing his live show to Salt Lake City July 7 at Kilby Court, where he will be entertaining with his music, stand-up and, quite possibly, a puppet or two.

Liebe Hart was originally born and raised in Chicago in 1957 before relocating to L.A. to become an entertainer. “I’ve been doing stand-up comedy ever since the ’70s,” says Liebe Hart. “My parents paid for me to go to Goodman Theater in Chicago and to take ballet.” Through mutual friends of his parents in his church, he was given his first opportunity in show business. “This is back in the ’50s and ’60s,” he says. “I was supposed to be on The Andy Griffith Show.” Liebe Hart remembers reading for the part and getting a chance to be on the show, “but my parents didn’t want me to break into show business at such a young age, and I was very disappointed.” He never gave up on his dream of being an entertainer, though. “I didn’t make it until I made it out here to L.A. in the ’70s.” In L.A., he met one of his inspirations, Doris Day. “She told me,” he says, “to know that I’m a success in action and to follow my goals and my dreams, and gave me a positive outlook on breaking into the entertainment business.”

His inspiration comes heavily from his upbringing and dedication to his Christian Science religion. As fate would have it, legendary Jim Henson was a Sunday-school teacher in the Christian Scientist Church on the East Coast, whom Liebe Hart looked up to and knew a lot about. He admired what Henson did in his classes with puppets to teach Bible Stories. “He was a role model to me,” he says.  “Like Doris Day. He’s what inspired me to be a puppeteer.” Later down the road, Liebe Hart himself was approached to do a puppet show teaching children to stay in school and other moral teachings. “I did the Jr. Christian Science Bible Lessons Show for 30 years.” His long-running show was on L.A. public access TV, which he states started out as leasing access and paying for studio time, and then later became free to the public. “I started in 1988, and the city of L.A. got rid of public access in 2008.”

Liebe Hart has faced issues of racism and other hardships in his career. “It wasn’t easy,” he says. “I’ve faced a lot of rejection.” Liebe Hart remains positive as part of his principles, though. “I try to laugh through my trials,” he says. He had an interesting early career where he worked along side legends like Robin Williams in the ’70s, and worked as an intern at Paramount Studios, often doing warmups for the audience before the shows began. He also worked with other odd-ball indie comedians, like Neil Hamburger. “Neil Hamburger is a wonderful, talented person,” he says. “He got work for me at Spaceworld, with James Quall, too.” Liege Hart says that he continued to try to visualize himself being successful and took acting and music classes. His positive thinking paid off when he read for Tim and Eric. “They asked me if I could write wacky and crazy songs, so I wrote ‘Salamae’ about the alien language of the Paladians,” he says.

Liebe Hart draws his inspiration for his comedy and music from his life. “My music is about things I’ve been through,” he says. His songs are about girls, religion and life experiences, on top of the oddities of things like extra-terrestrials. James Quall happened to be his next door neighbor, and was also brought along on Tim and Eric’s Awesome Show—matching their odd, do-it-yourself style of comedy—from Season 2 to Season 5. “Even though I am struggling now, I am extremely grateful for all of the success I have had.” Always looking on the bright side, he adds, “My problems make me stronger.” His beliefs drive him and keep him positive. He has advice for any struggling artist or entertainer: “Stay positive, work hard, don’t let nobody tear you down. Know that you’re loved, cherished, respected and appreciated, and that you have the right to be successful.”

Despite his general wackiness, Liebe Hart seems to be a genuine guy who’s just trying to bring his own kind of funny into the world. At the end of the day, he’s not satirizing anything and he’s not being farcical—he’s just being David Leibe Hart. He will be performing live at Kilby Court, July 7, at 7 p.m. with Big Baby, 90s Television, and Palmer Scott.