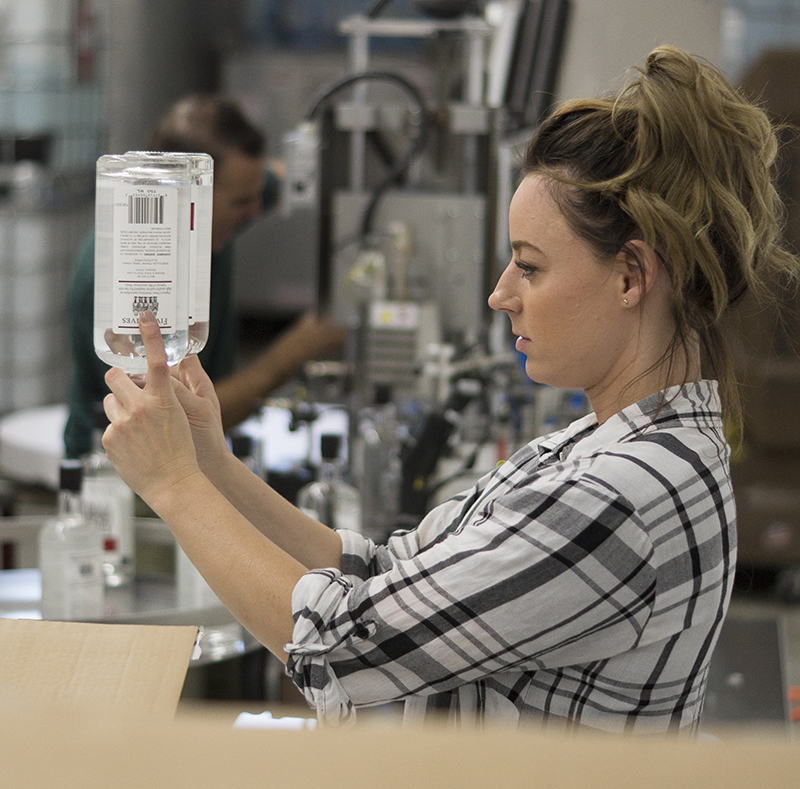 The Peachy Side of Utah Liquor: Ogden’s Own Distillery

Steeped in the folklore of infamous Mormon gun slinger Porter Rockwell comes one of Ogden’s Own’s newest products, the Porter’s Peach Liqueur. The peach flavor, a seasonal spinoff of the cinnamon whiskey Porter’s Fire, is a nod to the history surrounding Rockwell, who owned land along the Fruit Way north of Ogden. The peach flavor was too delicious to resist. “We tried the peach, and it was so good [that] we just had to move forward with it,” says Steve Conlin, Managing Partner of Ogden’s Own. “When you have something that tastes great, you have to come up with excuses of why not to put it on the market instead of why to put it on the market.” The timing was right for Porter’s Peach, which came out just in time for fruit season and also for different Peach Days celebrations across the state.

After seven years of being in business, Ogden’s Own’s success has come from building a loyal, local fanbase. For Conlin, this has to do with a branding that goes beneath the surface to really stand out. “We’ve kind of started a reputation now for paying homage to the Utah culture,” says Conlin. “We get that’s how people tie it back, get that it’s local and means something to them.” A name like Porter’s Fire automatically evokes an emotional response. It’s a name that Utahns who are familiar with Porter Rockwell’s story can relate to and that also sets Porter’s Fire apart as a product that is local to Utah.

Despite the fact that Porter’s Fire has only been out for about two years, the loyalty surrounding the Porter’s Fire label has helped the launch of Porter’s Peach immensely. “When we started with Five Wives, our first month of sales was roughly 60 cases. With Porter’s Peach, we’re probably around 80 in the first month, and a peach liqueur is nowhere as popular as a vodka would be in general,” says Conlin. Early in its launch, Porter’s Peach sold out quickly at certain liquor stores around the state of Utah. For Conlin, the early success of a launch like Porter’s Peach attests to the fact that Ogden’s Own’s support for other local businesses and events has reaped its benefits. “To know that we can launch a product with a very good support from our fanbase shows that we’re doing a good job of continuing to reach out into the market and make connections,” he says. “To continue to introduce products that people like—that’s the best kind of success. I’m proud of what we do out in the community.”

Creating such a stir around a new liqueur is something that requires a bit of strategy and luck on the part of the distillery, as liquor drinkers tend to not stray from their favorites as often as craft beer and wine drinkers would. Even with a loyal following, getting consumers to change the liquor they drink can create a unique challenge. “Even the most loyal of people, who like us and support us—it’s hard to get them to switch, because those habits are pretty deeply ingrained,” says Conlin. “If you go out to the bars, people are trained to order Fireball. To get them to make that mentality switch is really tough.” However, Conlin notes that once people have had Porter’s Fire, they tend to prefer the cinnamon whiskey with notes of vanilla over the ever-popular Fireball, which has a more sugary, candied effect.

In Utah, however, there is a positive trend that Conlin believes has helped people break their habits when it comes to choosing which liquor to drink. “I think there’s a drive here to support local,” he says. “I think people get it, that if they support local companies, they’re going to get support back. There’s a good mixology culture in Salt Lake. You’ve got Bar-X and Twist and The Copper Onion and all these higher-end establishments that really take pride in their cocktails.” This ever-increasing culture around liquor that is growing in Utah is also giving rise to more distilleries in Utah, setting the bar higher for Ogden’s Own. “We’re going through a huge shift,” says Conlin. “When we started, we were the second distillery. Now, there’s going to be a whole lot more … That makes things interesting, and there’s creativity out there.” Given the nature of Utah liquor laws, launch dates can be uncertain, and Conlin only wants to present new releases once everything, from branding to product, is perfected. It’s a strategy that has helped Ogden’s Own break through as a unique Utah spirit-maker in the mix of domestic, smaller distilleries in other states and larger, more well-known brands. Conlin especially prides Ogden’s Own with the success of Porter’s Peach despite the competition: “I guarantee you no one was thinking peach would be what we came out with next,” he says.

Porter’s Peach Liqueur can be found at local DABC liquor stores as well as Ogden’s Own’s retail location at 3075 Grant Avenue in Ogden. Conlin suggests the Peach Liqueur with an unsweetened iced tea, or a lemonade for those with an inclination towards sweetness. As far as what can be expected for Ogden’s Own in the future, Conlin aims to keep innovation alive with new products and to have fun making them. “I always joke, ‘I’m in the liquor business,’” he says. “Worst thing that will happen to me is that somebody gets drunk.”