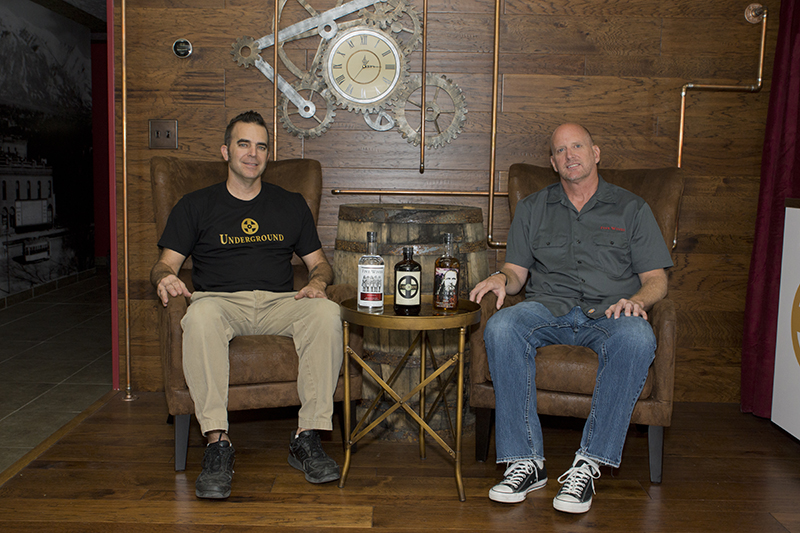 Ogden’s Own Wants Utah to Change Their Drinking Habits: An Interview with Steve Conlin

Throughout its history, Ogden has earned a reputation for bootlegging—it was once a place where one could step off the train to find gambling and drinking within arm’s reach. Today, Ogden’s Own, a locally owned and run distillery, is paying homage to that rich history with their five products: Underground, Porter’s Fire and Five Wives Vodka—the latter of which is available in three flavors. What separates Ogden’s Own from any other local distillery is that they’re not just making simple hard liquors— while they do offer a vodka, their main focus is on their flavored liqueurs, such as Underground, an herbal liqueur similar to Jägermeister, and Porter’s Fire, a cinnamon whiskey similar to Fireball. “Basically, I’d say that our MO is to make quality products at a quality price—we define quality products by using quality ingredients,” says co-owner Steve Conlin.

Ogden’s Own didn’t begin with the intention of making something that could be mass-marketed from the start—it began from the simple roots of a passion for distilling well-made and great-tasting liqueurs. “[Co-owner] Tim [Smith] started making Underground at home in his basement, and he’d just tell people about it and take it to parties,” says Conlin. “He has a history of distilling. He came to me one day and said he wanted to make something more with [Underground],” says Conlin. “We started out with about eight partners, and then over the next few months, he hand-bottled everything, and we took the first batch to the state of Utah and they put it on the shelves. [Currently], we have three full-time and two part-time workers, with a bottling crew of about 10 people that come in on Fridays that are just friends of the company,” he says.

Ogden’s Own uses half of the sugar than other distilleries making a similar product would use, which allows them to perfect the flavor rather than mask the alcohol with the taste of sugar. “To put that into perspective, an ounce of vodka, which is just alcohol and water, has 64 calories—an ounce of Fireball is 108 calories, and a shot of Porter’s Fire is around 78 calories,” says Conlin. But the better quality and hand-bottled product doesn’t mean that it will cost an arm and a leg. One thing that Ogden’s Own prides themselves on is that their prices allow for anyone to enjoy their handcrafted flavors. “We’re trying to allow people to purchase our local product without having to pay a price for it,” says Conlin. “Porter’s Fire is the same price as Fireball; I think Underground is a dollar less than Jägermeister; and our vodkas are priced right in that Tito’s and Absolut range, whereas what happens with a lot of craft stuff is that [it becomes more expensive]. We don’t want price to be the reason someone has to make a choice. We want them to choose based on quality.”

Aside from having a distillery in Utah—a state that has some of the strictest liquor laws in the country— Conlin says their biggest challenge lies not in overcoming legal issues so much as making consumers break their buying habits. “For 30 years, Jägermeister was the shot brand in bars. Tim had come up with this product that had [a similar] flavor and fit a niche, but there was no American-made version,” says Conlin. “When we started this company, we were pretty naïve, actually—we thought that if we had a better [version of] Jäger, people would come beating down our door,” he says. “What we underestimated is that the consumer is highly habitualized, and to break their habits—even with something better—is hard to do. It’s why companies spend billions of dollars in marketing and hundreds of millions in the alcohol sphere just to get people to change their habits.”

As far as the legal side goes, distilling and selling their own product isn’t as hard as one might think. “High West was the first [distillery], and for me, once I see that someone has done something, it tells me there’s a path—you just have to find the path and ask the right questions,” says Conlin. With over 10 distilleries and breweries in the state right now, the local liquor business is actually booming. Again, though, the downside to that is getting people to step outside of their comfort zone and try new things. “There was a study that said a wine drinker will drink up to 20 different types of wine a year; a craft beer drinker will drink up to something like 40 different beers per year; but a spirit drinker will drink around two different types per year,” says Conlin.

Currently, Ogden’s Own is available in over 13 states and will be expanding in the near future. Most states are able to carry Ogden’s Own products, but because of varying state liquor laws, they can only be carried by request only, meaning that if enough people ask for it, then a bar will order it. Locally, Ogden’s Own products can be found in state liquor stores and at local bars around the state. For cocktail recipes using Underground, Porter’s Fire or any of the three Five Wives flavors, check out ogdensown.com.