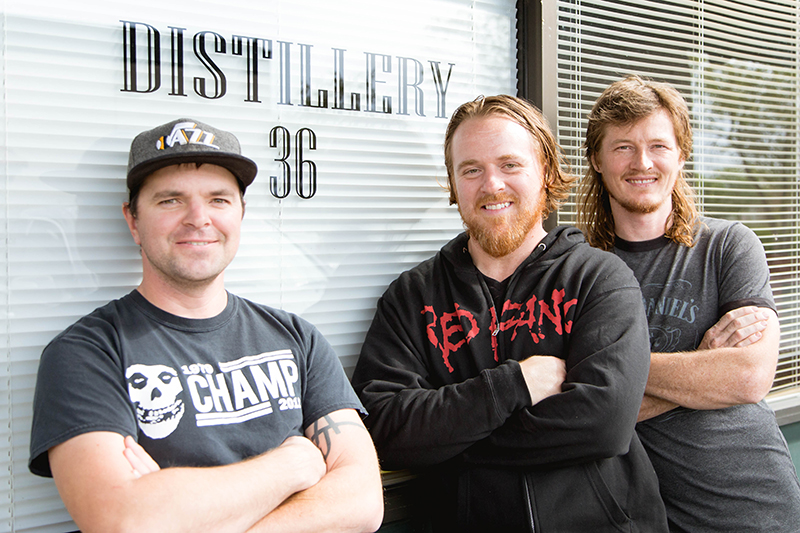 On the Rise: Distillery 36

Longtime friends Jensen Dobbs, Jon Gregersen and Creed Law began their remarkable journey of building Distillery 36 from the ground up around three years ago. Law, who’s the ultimate handyman/DIY engineer, approached the two after a research hobby developed into a passion for discovering the ins and outs of the distilling industry.

Construction workers/business owners by day, the trio pooled their resources and purchased a decent-sized warehouse space off of Redwood Road in West Valley shortly after making the decision to join the craft distilling market. “When we first got this place, it was a satellite distribution company or something,” says Dobbs. “It hadn’t been maintained, so when we got in there, it was pretty spicy. We cleaned it up really good, painted, set up new carpet and cleared out the rooms for our still. Now it’s a nice place to hang out.”

For a few years, the crew worked relentlessly on building not only a shop that they could be proud of, but the equipment that would eventually fill it as well. “We take a lot of stuff from other industries—[such as] the dairy industry, industrial kitchens, beer companies—and repurpose [their tools] for what we do because we didn’t have a million-dollar budget,” says Law.

Gregersen adds that “you can be creative and still produce a good product. Our equipment still looks and performs very professionally … except for our control panel,” he says jokingly, which, by the way, is ingeniously constructed out of a bathroom hand towel dispenser. Walking around their shop, one can see just how inventive and passionate these guys are: The still is built from a repurposed industrial soup kettle with a triple-distilling, 20-foot copper flute; the fermenters are repurposed from old milk coolers; and their water system is self-recycling. When combined, all the handmade inventions create a taste that is fundamentally un-reproducible.

The group finalized their first product, a white rum, this summer after getting their DABC license in March. Tapping into Utah’s history, they named their product Brigham Rum, which nicely pairs with the ironic history of their name (Utah was the 36th and final state to end prohibition). Currently, they are waiting to be approved and picked up under the rules of the DABC before they can begin selling. However, the guys are optimistic moving forward and can’t wait to begin exploring new kinds of spirits and the methods for creating them.

“We’re invested in this company all on our own, so we’re going to make sure that we do everything we can to make the best product, even if it costs us a few pennies in better supplies—because [our product] speaks for us,” says Law. “We could have probably pushed a little harder and rushed things, but we have blown our timeframe off many times to make sure we do it right.”

At the moment, a solid release date has not been finalized. However, personal tours can be made available by appointment for those who are interested in learning more about their process. Don’t forget to stop by their Facebook page for updates on their progress.