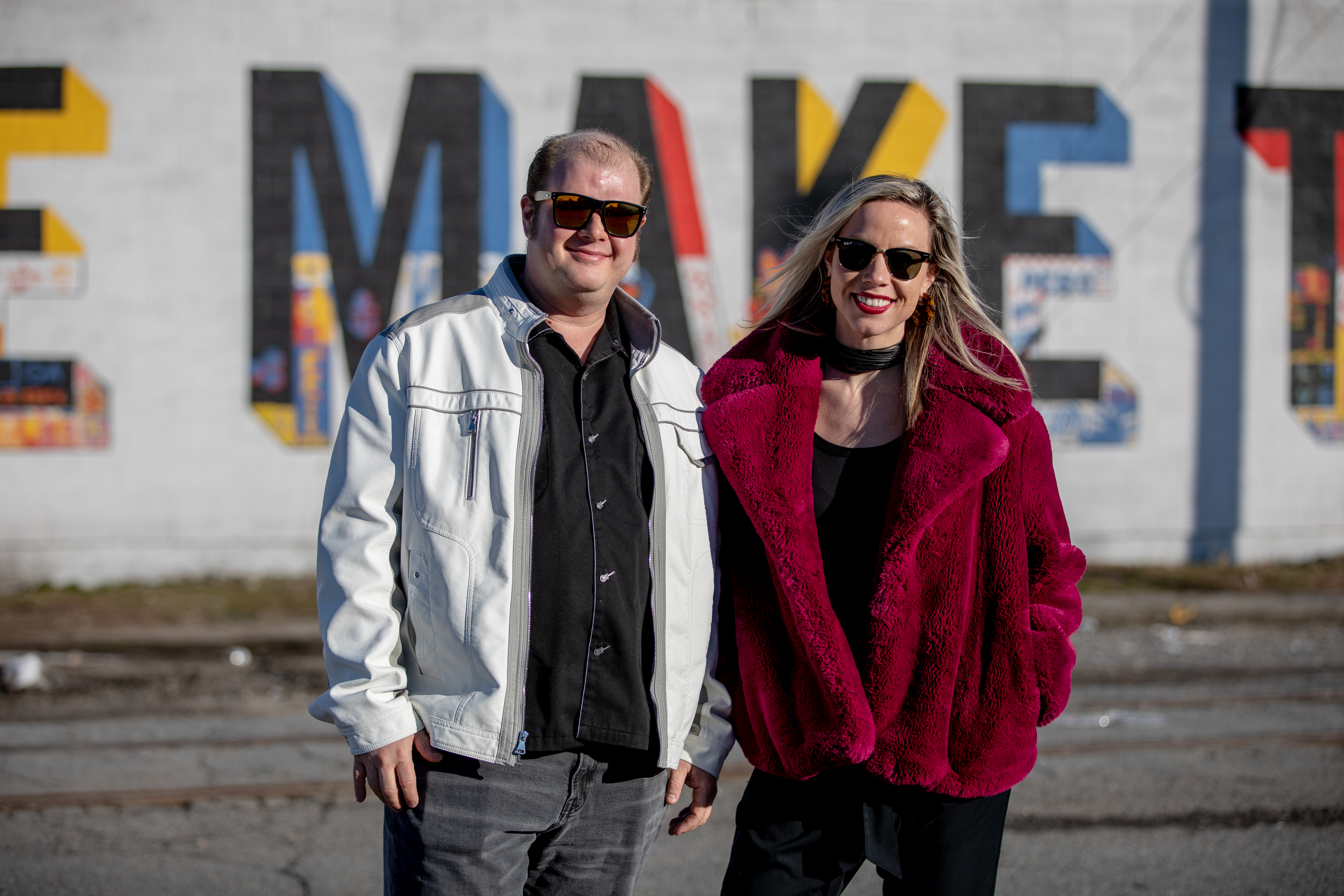 (L–R) Derek Dyer and Renya Nelson have spearheaded efforts to add murals by local and national artists alike to the walls of Salt Lake City— bringing color and community to the forefront of South Salt Lake and the Granary District. Mural: Renya Nelson, Cody Comrie. Photos By John Barkiple

It doesn’t take an eye for art to notice that Salt Lake City is changing in a colorful, creative way. Renya Nelson and Derek Dyer are people fueled by their passion for art and their cities, and they both chased their instincts to paint the town. They hope to create a stronger sense of community and presence with colorful, engaging murals through continuing mural projects they’ve overseen within the last year. Dyer’s is South Salt Lake’s Mural Festival and Reyna’s is to beautify the Granary district.

Throughout the Granary District and South Salt Lake, you can see 24 eye-catching murals adorning the buildings in these neighborhoods. They feature artists like Trent Call, Evan Jedd Memmott, Elaina Court, Cara Jean Means and Justin Johnson, among a handful of others. Memmott’s mural, which is one of my favorites, can be spotted on 712 S. Kilby Court, which greets show-goers with a gooey, blue-and-honey-toned piece that represents a dreamy, psychedelic Beehive State. This mural appears on the cover alongside pieces by Chuck Landvatter and Roger Whiting in South Salt Lake and by Joseph Toney in Granary. Another that stands out to me in South Salt Lake is Court’s and Elizabeth Bunker’s eye-catching mural, depicting interesting geometric shapes all in grayscale, with full-colored sprigs of coffee branches, which can be seen on Utah Coffee Roasters’ wall.

Nelson, a former resident of Los Angeles, California, was working for a marketing agency as a National Event Director. She ended up sponsoring an event called Primary Flight and was to go to this event with a camera crew to document the week-long event in 2010. During this week, handfuls of famous artists from around the world were painting the walls in this area. “That experience never left me, and when I asked the guys how they did it, they said that they just approached the mayor. Now, that neighborhood is called the Wynwood Walls, and it’s a major tourist destination,” Nelson says. This is what sparked Nelson’s idea to elevate the Granary District in a similar way. Former city council member and current state senator Derek Kitchen and the city’s Redevelopment Agency (RDA) gave Nelson the green light, and expressed that the RDA has a budget to be specifically used to beautify Granary.

Dyer’s “aha!” moment was sparked by his own passion for visual art and street art as a whole. In his late teens, Dyer would travel around the country and take pictures of street art in many different cities. He’s also the founder of the Utah Arts Alliance. While they curate the Urban Arts Festival each year—at which they have live painting demonstrations—Dyer wanted to expose the community to the beauty of street art more. In South Salt Lake, you can find murals all over the place. “Anytime I have a building or a wall to paint, we’ll cover it,” he says.

Dyer saw an opportunity to take the initiative on a mural festival during the construction of a “creative district master plan” and with the help of the South Salt Lake Arts Council, the Arts Alliance and the city of South Salt Lake, wheels started turning.  “Murals are relatively inexpensive, and I figured, if we opened up the opportunity, that artists would respond really well,” Dyer says. Through that process, they decided that they could safely consider South Salt Lake as a creative-industry zone, as many artists and creatives have moved to the area lately. “Overall, the [Salt Lake County] mayor and the city council were supportive of it.”

While Dyer and Nelson had similar ambitions, they both coordinated and executed their own festivals individually. In 2018, Dyer’s festival hit the streets in May and Nelson’s in September. “We all had no idea that we were doing this simultaneously,” Nelson says. “This has brought Derek and I together. The fact that he and I were introduced through this process is incredible because now we both have a track record and we can approach the city.”

In order for these projects to move idea from idea to execution, Dyer and Nelson had to talk to their respective mayors and city council representatives to back their visions. Working directly with them allows for a smoother, legal process. “They basically get a contract with building owners to say that they’re leasing the side of their walls for this art, and they can’t paint over it,” Dyer says. “I think if the Arts Alliance—alone, without the city—came in and said, ‘We’re painting all the buildings,’ we would have run into a lot more trouble.” In Nelson’s case, the artists had to contact the business owners directly with concepts and get permission from them. She says, “Next time, we really want to go into it with a game plan that’s easy for the city and the community to digest.”

Ultimately, the goal is to make Salt Lake City an international urban-art destination by featuring artists on a local and a national scale. “I don’t believe art should [always] be behind a gallery wall because art invokes so much in us,” Nelson says. “When you can see it on a large scale, it can inspire a lot of people.” At the time of this interview, Dyer had just initiated his call for artists and submissions for the upcoming Mural Festival that takes place on May 11, and Nelson is gearing up to open submissions and volunteer positions to anyone who would like to help the art initiative. Salt Lake can certainly expect to see more building art popping up on buildings in Granary, South Salt Lake and, eventually, across the city.

To learn  more about the South Salt Lake Mural Festival or the Granary District Project, visit sslarts.org or saltlakepublicart.org, respectively. Find photos of the murals below.