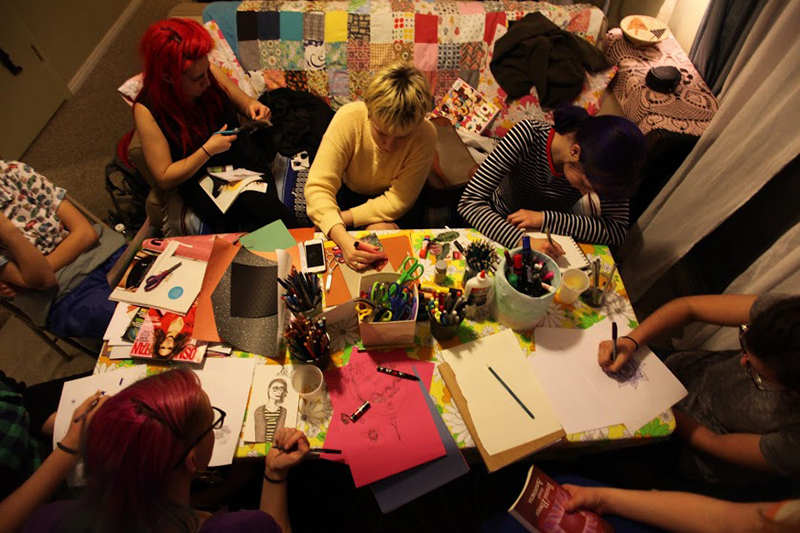 Pillars of Salt: Don’t Condemn Me for Caring

“I feel like all zines are good. That’s something about the zine community.” So says Sara Faulkner, the founder and editor of Pillars of Salt, a new zine based currently in Provo that includes content contributed by people from both Utah County and Salt Lake City. Zine culture holds the appeal of immediacy and creative control, and it’s the perfect medium to craft any kind of space that one wants to create. With this in mind, Pillars of Salt’s focus is on creating a safe space for multiple individuals of varying identities and backgrounds—primarily LGBTQ+ individuals and women—to express and put out into the world feelings and discussions on a wide array of issues that those individuals are facing in their communities. In addition to talking to Faulkner about the founding concepts of the zine, the first issue’s contributors, Marie Brian and Natascha Deiningier, discuss what inspired them to get involved.

Faulkner says that as she got into her mid- to late 20s, she really wanted to create a resource for people to get together and share their personal interests, but especially social and political ones that are specific to Utah. Being interested in zine culture since high school—specifically, the “old-school punk aesthetic” like the style done by John Holmstrom in Punk—she decided to get back into making zines to get the ball rolling on creating the inclusive, creative group she’d been wanting. However, the zine seems to have grown into something much more expansive, as Faulkner lists off what their now realized focal points are. “We focus on LGBTQ+ communities, gender equality, racism, avoiding apathy, reproductive rights, sex abuse, religious issues, spirituality (with or without religion). Feminism is another [topic], but we focus on intersectional feminism,” she says. “We support people who are struggling with leaving the Church, since there are so many people leaving the LDS religion right now. There are also people who disagree with a lot of their political and systemic structure, but want to stay because they have that emotional, spiritual connection to the Church. So, we’re trying to give them an outlet to write personal essays or art about that. We try to stick with females and LGBTQ+ individuals for our local artists.”

They also, interestingly, intend to include issues on parenting, specifically for parents who want to introduce activism into their children’s lives, a unique take on activism that doesn’t seem too common. But, Faulkner says, “One of the main reasons we started this was because suicide is so prominent in Utah. We wanted to create a voice for people who have struggled with suicide or known someone who’s committed suicide, or who are affected by suicide in any way at all. I’ve lost lots of friends and family to suicide, so, coming back to it, I’m sick of it. I want to help people navigate it, especially those who have lost someone close to them, and realize why it’s happening. We have to talk about it. ”

The first issue follows the theme of empathy. Faulkner says their monthly meetings are meant to be safe, positive spaces for creativity and friendship. Some people, like LDS feminists, just want a place to connect with more like-minded people. Marie Brian, SLC embroiderer of Cotton Floozy (she writes a comedy piece about the Democratic Caucus turnout in American Fork), says, “They want that space where they can be true to their identity. It’s Utah County. We’re a non-hostile place, because all around us is a very hostile place.” Faulkner drives the point home, saying, “Even if you have a slightly different viewpoint, let’s learn from each other, because that’s how progress is gonna happen.”

Contributor Deiningier says, “I think I was really interested in the zine as something that felt really grassroots to me. I think that we tend to think of writing or dance or art as all things that only certain people who have talent do. But I think it could also just be something that we all do, all together, all the time, and [where] we learn from each other. It’s a way of expressing ourselves. I think I also get that out of feminism. To me, feminism means being vulnerable and sharing things, amongst, obviously, other things.” Deiningier’s piece was an interview with Hande Togrul, who ran the University of Utah’s Inclusion Center for a long time. “[Togrul has] done lots of anti-racist organizing,” says Deiningier. “I wanted to talk about how feminism or feminists have been pretty white. I wanted to interview Hande to, through her brilliant mind, bring some of [those issues] out.”

The rest of the content for this issue includes more writing pieces, poetry, essays, word games and a paper doll in the back, all done in color to “represent the colorful personalities and lives that are involved.” This inclusiveness to narrative and experience is perfectly reflected in a pretty perfectly named zine. Faulkner says of the biblically sourced name, “Lot’s wife looked back on Sodom and Gomorrah and turned into a pillar of salt. She was mourning her loved ones who were left behind.” Brian reaffirms, “It’s celebrating the fact that we look back, that we care. People who care should not be condemned for caring. A Pillar of Salt is awesome. We should all care enough to look back and to worry and to mourn.”

The zine release show is on May 6 at Muse Music in Provo. $7 at the door gets you entry and a zine. Otherwise, Pillars of Salt can be found after May 7 on their website, pillarsofsaltzine.tumblr.com. Local bands featuring female and nonbinary individuals will perform, featuring New Shack, Batty Blue, Alyssa Piper and Bubbline. Support local creative, activist aims and check out this lovingly crafted gem while listening to great local music!