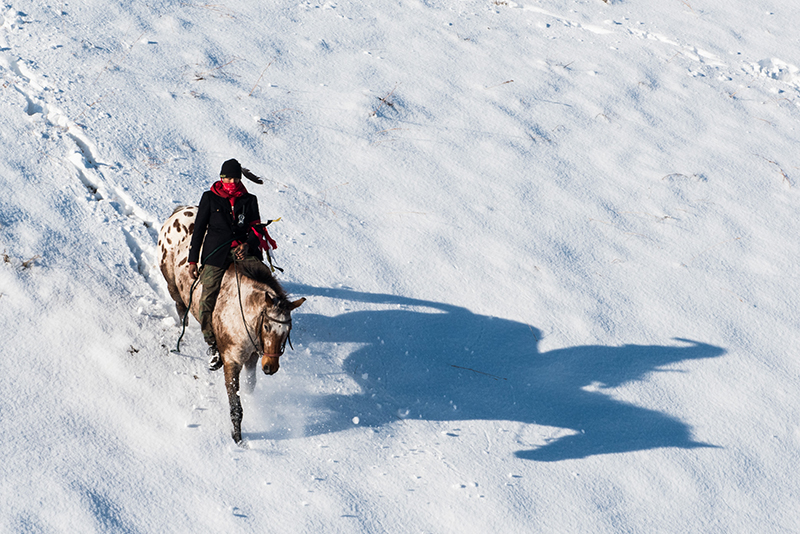 A Place of Power: Russel Albert Daniels and the Authentic Native Image

Russel Albert Daniels is a quiet, pensive artist who contains an expansive river within him, much like the spaces and stories his work reflects. His photographs have captured the complexity of the modern Native experience intersecting with nature and contemporary political struggle. He recently released a zine about Bears Ears and has another coming up this summer. Daniels’ images have also been highlighted in a New York Times article in May as well as the Natives Photograph project. Daniels’ Native photographer cohorts gathered with protesters at Standing Rock, seeking to portray a more authentic Native experience not only in the context of activism but in everyday life. Daniels describes his haunting photograph of teepees against a strange nightscape on a boreal winter evening: “This is a scene of the Oceti Sakowin camp at Standing Rock,” he says. “A huge blizzard rolled through that week in early December. In the background are the Dakota Access Pipeline security lights—there’s an eerie glow from them. I see this as the strength, resilience and power behind the indigenous movement. They’ve had everything against them and they’re still alive.”

At a favorite local coffee shop, tucked back in the corner away from the bustle, he takes a few moments to gather himself with contemplation. “My indigenous identity has played a big role in my photography and my emphases,” he says. “They weave themselves hand-in-hand. I wanted to use my work as a tool for storytelling.” Daniels chuckles when I ask him how his work has sought to dispel the common white-colonialist mythos of the Native experience. Daniels cites the Natives Photograph project, which launched in May and serves as a database for his work and that of fellow Native and ally artists. Having spent a significant amount of his career working with academic and professional programming to support Native artists in the newsroom, Daniels cites his longstanding mission to support the representation of Native people.

“I’ve had a lot of training through journalism school and academia in workshops based around Native students seeking careers in journalism. We focused on placing Native peoples in newsrooms and television. Native people are the lowest represented; our goal was to change that. I’ve brought these ideas into my own storytelling—I feel that not having indigenous perspective leads to stereotypes that then create ‘realities.’ It’s not just about the Native in their headdress and regalia at the pow-wow. It’s a lot deeper and more intricate. I feel that being part-Native allows me to help change the reality of what has been laid out. Native peoples’ stories are often left out.”

Regarding Daniels’ most memorable subjects, “I did a multi-year project on Two Spirit when I went to the University of Montana,” he says. Daniels lights up as he delves into the attachments he forged telling this particular tale. “I befriended the community in Montana and their medicine man and turned the story towards him. He passed away in the middle of the project … It was very sad. I feel like it was never completed. Being Two Spirit and being open about that—especially at the time I did the project—was very hard. Listening to their stories and their experiences felt like powerful resistance to contemporary western culture. Since then, that community has sort of grown in conjunction with LGBT issues.”

Daniels’ photographs integrate person and place as an apparatus for the human narratives he wishes to depict. “I work with a lot of public land and conservation issues,” he says. “You can’t separate Native peoples from the land. I wouldn’t call myself a landscape photographer—I actually try to avoid that label. I’m often more concerned with human life on the edge of wilderness and the impact we have on the landscape.”

Daniels’ photography in the midst of Native activism has offered a particularly salient artistic message. “I went to Standing Rock after seeing in the news all the violence unfolding,” he says. “In 2016, I decided I had to go see it for myself. I went in December of that

year … thousands of people showed up! It was the same week Obama had stopped the [Dakota Access] pipeline. At that time, it was a huge success, but at the back of everyone’s mind … we knew who had recently been elected and that these protections could be stripped away. I think Standing Rock created a huge modern movement in indigenous people fighting for their rights.”

Daniels’ forthcoming projects include two zines encapsulating the complex tension of the Bears Ears region. “I wanted a tangible product people could walk away with,” he says. “The biggest emphasis of the Bears Ears zine is to inform about the site. People aren’t aware what the landscape contains. The primary goal is to let people see what’s really there … There’s 100,000 sites in the original Antiquities Act. They range from cliff dwellings to kivas to burial grounds. I wanted people to see why the Antiquities Act was used to preserve these sites.” Daniels’ first Bears Ears zine displays his photographs in unalloyed black-and-grey tones beautifully accompanied by written works by Diné (Navajo) artist and activist Denae Shanidiin and excerpts from Terry Tempest Williams’ essays. “The first zine is focused on the beauty of the land,” he says. “The second (which will come out this summer) focuses on the negative impacts of fossil fuel extraction, uranium mining and irresponsible land use. There’s bullet holes and people have chipped away at petroglyphs! I wanted the first one to have a strong female energy and the second one is focused more on a destructive, more male aspect.”

Daniels’ zines are available via his website alongside several projects, including his Interior West collection highlighting the Great Basin, Rocky Mountains and Colorado Plateau and his works at Standing Rock. Visit russeldaniels.com for more information, and check out the gallery below for more of Daniels’s work.