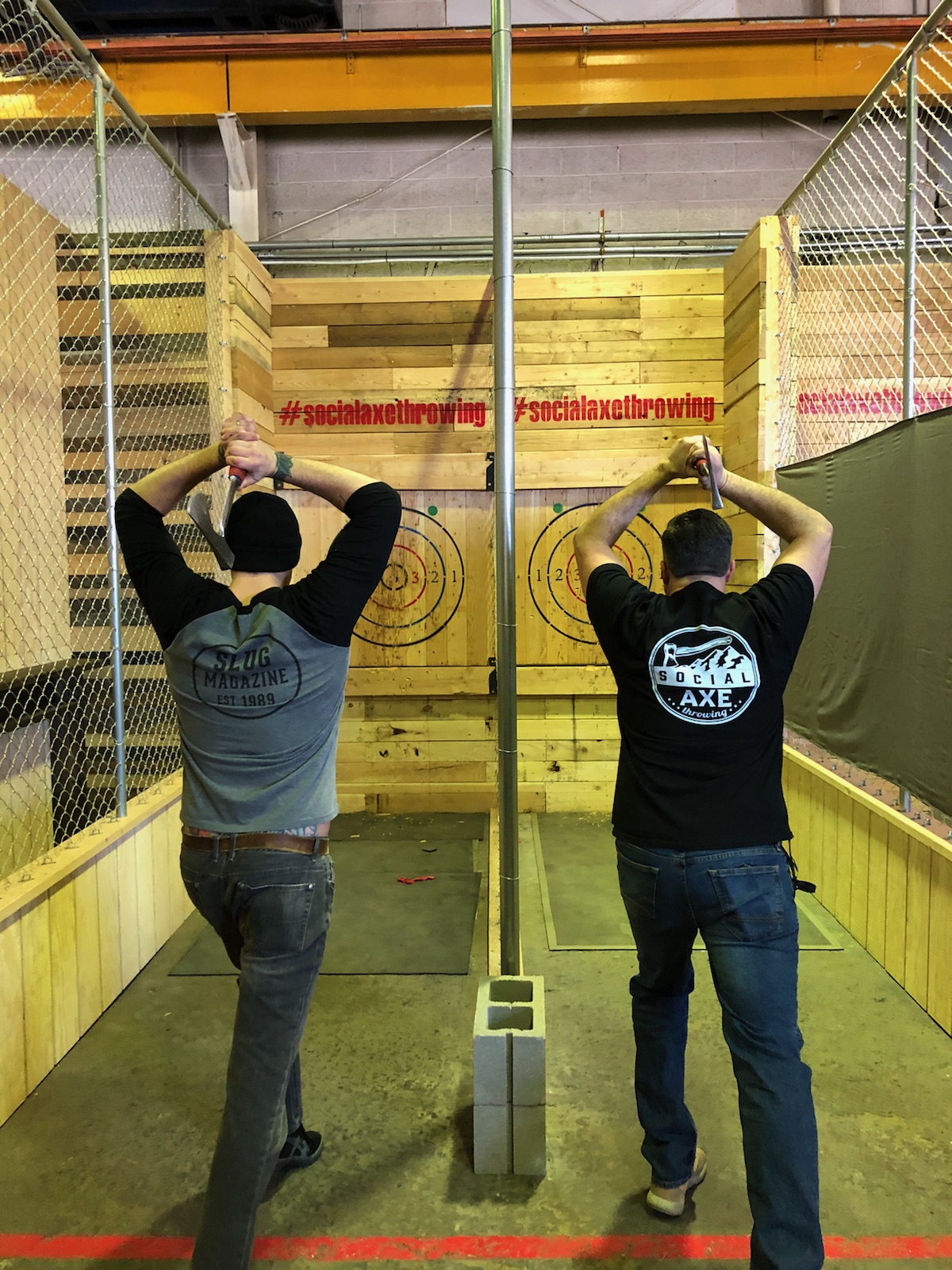 This is Primal: Social Axe Throwing in SLC

When’s the last time you’ve thrown something at something else? Do you ever throw a cell phone and marvel at your accuracy? There’s an inner release that comes from being accurate while smashing something. Try this: Grab a sturdy figurine of sorts (a small stuffed animal works in a pinch) and place it on top of a chair. Now stand two table lengths away from Mr. Fluffy Cakes and grab a pillow. I want you to hold the pillow in a golf-like grip from one of the corners with two hands (Thumbs interlocked). Now raise your hands back behind your head and on the count of three, fling that pillow at Mr. Fluffy Cakes’ relentlessly cheerful face.

Feel better? Now replace that pillow with a Swedish Hults Bruk axe. If you were inventive and used two pillows, that’s OK … you can also throw two axes here. Replace Mr. Fluffy Cakes with multiple 2-foot-by-6-foot pine boards that make up a target, and you’re standing where I’m standing. I’m in an old steel-fabrication shop that’s now become the hub for SLC’s version of Ogden’s original Social Axe Throwing … club. It’s not really a club, but it feels like club. It’s more like bowling or Top Golf as far as structure and presentation goes. You have the option of being a walk-in ($15 per person per hour) or league play; or with a group, you can rent out an arena for the Main Event, which offers stools, tables and curtains for privacy. The Social Axe Throwing (club) also has a series of rotating food truck vendors that pull right up to your area for food via window. Events can be catered as well.

Holding an axe over your head is an “empowering feeling,” says Steve Lister, one of the three Social Axe Throwing founders. Lister is killing it in his red-and-black flannel today. He also has a coaching background, so his skill is bleeding into my skill, and I’ve been destroying pine ever since. Pine has never done anything to me personally, but I render the target unrecognizable anyway. Each swing is release. The numbers in the circle mean nothing to me. All I see is late fees, traffic and people who wear sandals outside in the winter. Every nuisance. Every annoyance is split right down the middle. Nothing tells the image of impractical winter-sandal-wearing people to go away like an axe—that’s just science.

“Everyone gets a little coaching before they start throwing,” says Lister. In this 4,000-plus-square-foot arena, coaching is reasonable and comforting. I want to wield this instrument with confidence, not fling it through the air under the “winging it” protocol. You have to be safe with axes (just ask any former teen in a horror movie). There’s no release if you don’t value the power of what you’re holding. Safety first—then DESTROY PINE!

There’s actually a bit more to do than destroy pine at Social Axe Throwing. If you decide on the Arena Package, you get two hours of HORSE (like in basketball, but you spell out “SOCIAL AXE THROWING”), Around the World (like in darts) and a final competition of 10 to 12 throws for the ultimate high score and chance to become the Axe Master Champ!

While Lister and I are being social and throwing the axes, the other two founders, Mark and Brayden Floyd, come over to say hi. You can tell the brothers apart only by facial hair. Brayden has a majestic beard, and Mark has a moustache with so much personality, you feel obligated to meet him twice. Mark and I threw a few axes in tandem for a minute before discussing the athletic benefits of axe throwing. “This is really a workout,” he says. “You come here and throw the axe 40 to 80 times … You’ll feel it.” The Estwing axe provided by Social Axe Throwing is sturdy with some weight to it. Just the process of reeling back and releasing it feels fluid, like swimming.

But here’s the thing: The people around me throwing axes aren’t sports guys. Lister and I noted that about three-quarters of the attendees were women. Lister then tells me a story of this boy who came in with his parents. I guess the boy was talking polite little boy trash to his mom for not playing, until his mom stepped up and destroyed him (While talking polite little mom trash.) Additionally, because my initial impression of axe throwing was that it would take some practice before I got it down. This is not the case—it came easy. Social Axe Throwing accommodates many skill levels, but even as a beginner you can find a way to be competitive.

On the way out, Brayden and I pass one last area called the Losers Lounge. Apparently, you can come here, eat snacks, hangout and not throw a thing. You can be a curious bystander and check everything out. I encourage you to do so. It’s exciting to watch and really sucks you in. “It’s totally primal,” reads the tagline for Social Axe Throwing. This is true: Axe-throwing connects with you in a really instinctive way. I had never thrown an axe before I walked into Social Axe Throwing, but I hit the target the first time …  and then again … and again.