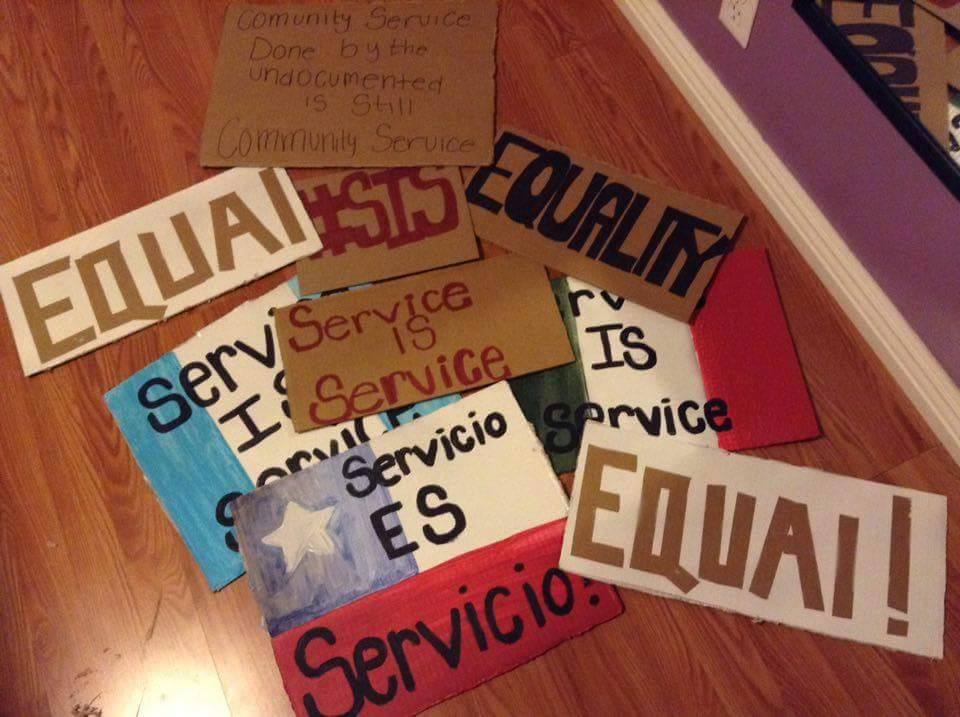 Jessica Rodriguez placed her triumphant Presidential Volunteer Service Award in a large manilla envelope, sealed it and sent it back to the White House. This was not because of a mistake—she had earned it without question. This was an act of protest.

Rodriguez is the president of Latinos in Action at Cyprus High School, a local chapter of the national organization that empowers young Latino students toward educational and career success. When Rodriguez saw that some of her peers were denied the Presidential Volunteer Service Award due to their undocumented status, Project Service is Service was born. The mission of Project Service is Service is to lend a voice to the marginalization of undocumented students in receiving the award and to petition President Obama (and his successor) to redefine the qualifications for the reward to include undocumented recipients.

I connected with Rodriguez just days before the planned march on Capitol Hill—slated for Saturday, Aug 6.—to learn more about her vision and the genesis and goals of Project Service is Service.

SLUG: What was it like for you to return your Presidential Volunteer Service Award in protest?
Rodriguez: Honestly, it wasn’t a big deal to me to return the award. Before I received it, we already began working on Project Service is Service, so when I saw that my hands were holding the award, we were fighting for my classmates. It was almost instinct that I had to return it. I questioned a little if I really should, because I had teachers tell me that it could open the door to many opportunities, but I knew I wasn’t up to opening that door without my undocumented classmates!

SLUG: How did you share the word about Service is Service?
Rodriguez: It’s been hard sharing the word about Service is Service. We had to start with the resources we had: the teachers that actually cared about us. We turned to a few trusted teachers who later informed us about their connections and people we could turn to, and our list of resources began to grow from teachers to after-school program coordinators to coworkers. Before we knew it, the list soon included politicians and news anchors. Just with all the support that we had, we were able to spread the good news!

SLUG: Who are your role models?
Rodriguez: Honestly, as cliché as it may be, my role models are my parents and my classmates. They give me perspectives and open my eyes to a world I would have never considered even existed. They are the ones who gifted me with the ability to truly analyze a situation and understand it for what it is. Without them, I would never have seen the importance behind changing the qualifications for the Presidential Volunteer Service Award (PVSA).

SLUG: What are some of the unique challenges for undocumented students hoping to pursue higher education and careers?
Rodriguez: The biggest challenge is money. Money is what prohibits many students of color from attending college, even moreso if they are undocumented. There are many scholarships that require students to be “legal” residents or U.S. citizens, so the amount of financial aid that’s out there for the undocumented community is very small. Now, prestigious awards such as the PVSA can also help with financial aid, as it allows a student to stand out on an application for college or a scholarship; however, again, that’s an opportunity that is not available to them. Unfortunately, because of this disadvantage, people create stereotypes about the “undoc” community, and people become used to them and slowly begin to believe them, and that’s toxic to society. Because of that, aid to achieve higher education isn’t available to them.

SLUG: Tell us about other work you’ve done for Project Service is Service and Latinos in Action.
Rodriguez: In Latinos in Action, we have organized hygiene drives for The Road Home and coordinated the Superbowl of Caring at Cyprus High School, and even created and the recycling program at our high school. We also founded the annual Career Fair at our high school. The service projects we have done with LIA are countless. … We stepped up our game this year in regard to serving the community through volunteering to one: make a difference; and two: to make a statement that we are more than the stereotypes we are held down by. SLUG: Tell us about your Aug. 6 Project Service is Service march to the Capitol.
Rodriguez: The purpose of the march is to endorse Project Service is Service, so that our message can go nationwide and reach President Obama … We also want to put pressure on Utah politicians, because we wrote letters to them as well, and they have been non-responsive. But as for those who responded—such as Senator Hatch—they have said that there are “policies that preclude” them from helping us give incentive to President Obama to change the qualifications. As for Governor Herbert, he said he would make a state-level award for the undocumented community, which he never followed through with. So, it’s not fair that they are the ones in office and still dare say that they are representing us, when clearly they’re not even willing to support their own high school students. That is why we are meeting on Aug. 6 at 5:15 p.m. at City Creek to walk peacefully toward Capitol Hill and share student testimonials as to why they are here supporting Project Service is Service.

SLUG: How would you like to see the next president further equal access for undocumented students?
Rodriguez: I would like for the next president to do more than just acknowledge the broken immigration system. There are so many areas in which improvement could take place. So long as they actually take action, I’ll call it a good start. However, if the question is directed in regard to the PVSA, hopefully Obama would have already taken care of business.

SLUG: What are your future educational and career goals?
Rodriguez: I would like to study political science and theater and hopefully get a career as a politician or a professional actress—or maybe both: Pull a Ronald Reagan, but actually be a good politician! I just want to change the world and share my talents and do what I love at the same time.

SLUG: What’s your personal motto?
Rodriguez: I would have to say that my personal motto is, “Make them understand.” … The roots of social problems come from binary ideologies. Sort of like, you against me; them against us. And we can’t think that way in order to fix things. We need to … understand both sides to formulate one solution. … So let’s just keep making them understand!

Thanks, Rodriguez! Let’s all be a part of unpacking our own binary mentalities and those of our larger society. You can be an ally and support Rodriguez and her peers by joining the march on Capitol Hill for Project Service is Service at City Creek on Saturday, Aug. 6, at 5:15 p.m.