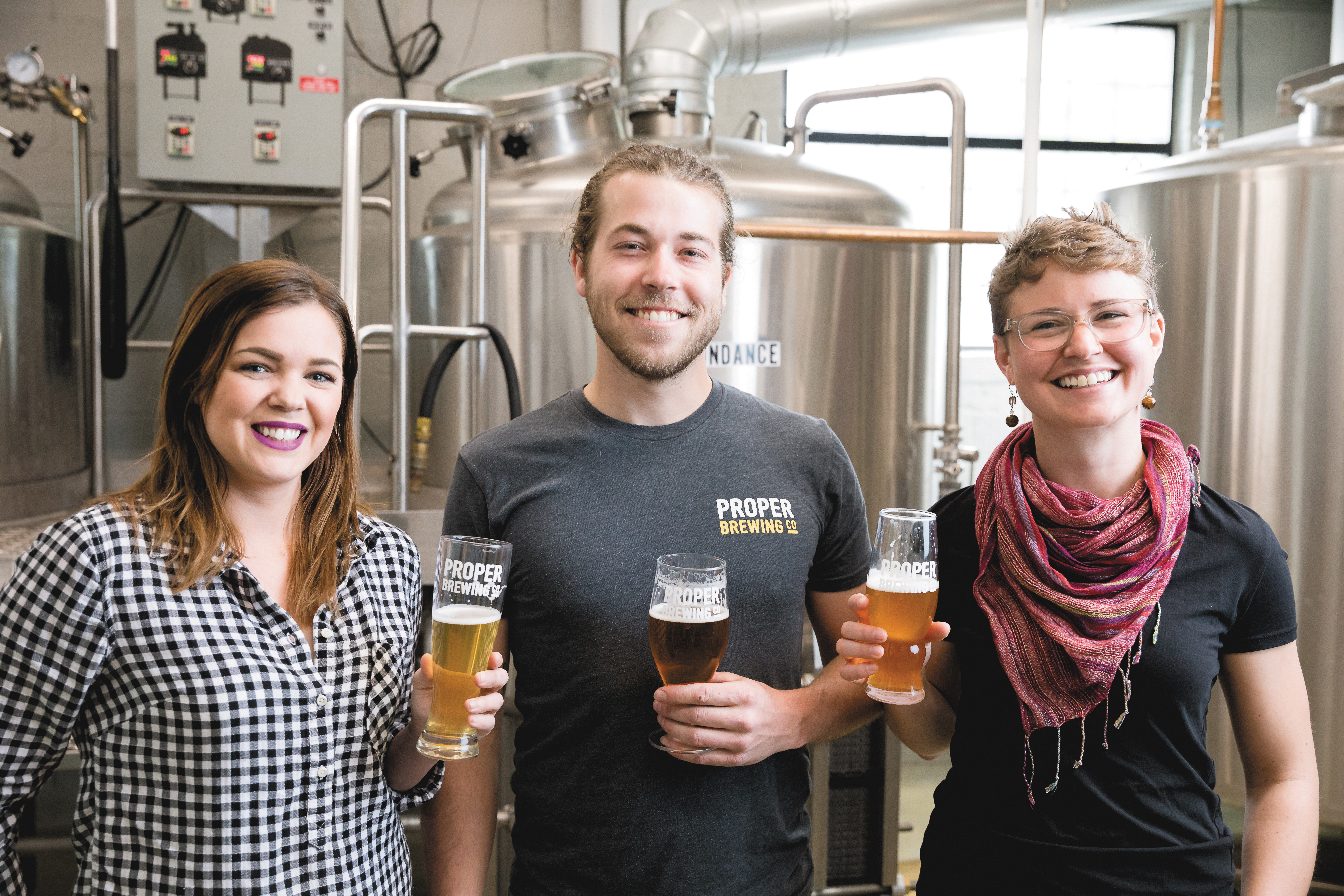 The word “nerd” brings a certain picture to mind: thick glasses with white tape in the middle, a stack of books that’s nearly too heavy to carry. But if you add the word “beer” before “nerd,” the title is suddenly sexier and less sickly. Yet, the term “beer nerd” is still so vague. If only there were a title that carried a bit of power with it, something with a recognized level of knowledge.

Ah, yes. Certified Cicerone! You may know this title as the grand step above Certified Beer Server in the Cicerone Certification Program.

Proper Brewing Co. employs three of seven Utahns with the Certified Cicerone® title (pronounced sis-uh-rohn). “I think that having three Certified Cicerones at one company officially makes us the nerdiest brewery in Utah, which I am all about,” says Certified Cicerone Eleanor Lewis, Marketing Coordinator. “If you’re in the beer industry, generally, people know what that is, and it is always positively received.” The recognition of the title within the industry grants high regard not only to the individual but to the company they work for. Certified Cicerone Rebecca Link, Sales and Education, says, “You’re more respected right away, they have more questions for you, and they take you way more seriously.” But there will always be people who don’t quite get it. Certified Cicerone Jack Kern, Brewer and Head of Packaging, says, joking, “You get a lot of questions—more so what a Cicerone is. Even people in the industry ask, ‘Isn’t that like, the thing you get at the taco cart?’ No … that is a chicharrón …” Titles and street food can be confusing.

The title of Certified Cicerone is given to those who have achieved the second of four levels in the Cicerone Certification Program. The initial level is Certified Beer Server, followed by Certified Cicerone, Advanced Cicerone and Master Cicerone. The Certified Cicerone exam lasts about five hours and consists of distinct written, demonstration and tasting portions. One might be asked to complete an essay on IPAs, demonstrate how to disassemble a beer faucet, or identify off-flavors in a blind beer sample, among many other questions. Most study for six to 12 months in preparation. Those who endure this intense study are well-equipped for the rigors of a competitive, growing market, such as the craft beer industry.

The more attainable title of Certified Beer Server is an essential part of maintaining Proper Brewing Co.’s level of service. “All of our employees have to have the Certified Beer Server [certification] if they’re going to be talking about the beer, serving the beer or selling the beer,” says Kern. This level of certification inculcates a surface-level understanding of a wide range of beer topics, helping staff members effectively communicate with guests.

The topic of being Certified Cicerone with regard to gender is an ongoing battle for the ladies at Proper Brewing Co. who bear the title. Link says, “It’s always surprising to me how surprised other people are when I show that I know about beer,” she says. “I think there are a lot of instances where I’m not taken seriously until people hear about my title.” Lewis’ experiences are no different. “That’s definitely a big reason why I got it in the first place.”

Being a Certified Cicerone isn’t just an idle feather in a cap. These Proper Certified Cicerones apply the encyclopedic beer knowledge needed to pass the exam at their jobs on a daily basis. “I sell beer, so you have to know about the history, the style, the flavor profiles, accurate ABV ranges, commercial examples, what’s popular, what’s not,” Link says, rattling off the list like it’s part of her sales pitch. “It is pretty much every single aspect of my job.” Though existing in an entirely different department, Lewis finds that her position, too, requires a knowledgeable beer enthusiast. She is the liaison between the brewers and the general public. With regard to how a brewer and marketer need to be able to communicate, she says, “You have a breakdown in communication when you don’t have that shared knowledge base.”

What sets Proper Brewing Co. apart from other breweries is its employees’ knowledge across the board. The intimate understanding of their product and elevated communication between departments creates a tightly knit, beer-making and -selling machine, and it’s all thanks to the standards instilled through the Cicerone Certification Program.

The desire to share beer knowledge is at the heart of the Cicerone Certification Program, and also Proper Brewing Co. “Utah only stands to benefit from more people doing the Cicerone, and that’s what I wish I could use my Cicerone knowledge for: to expand that education of other people,” says Kern. The value of having three highly educated staff members in three different branches of operations under one roof cannot be overstated. There is no disbenefit to having well-rounded employees. Lewis, Kern and Link make Proper Brewing Co. the nerdy powerhouse of Utah breweries, certifiably.

Lauren Lerch is one half of the blogging duo Crafty Beer Girls. For more, visit craftybeergirls.com.