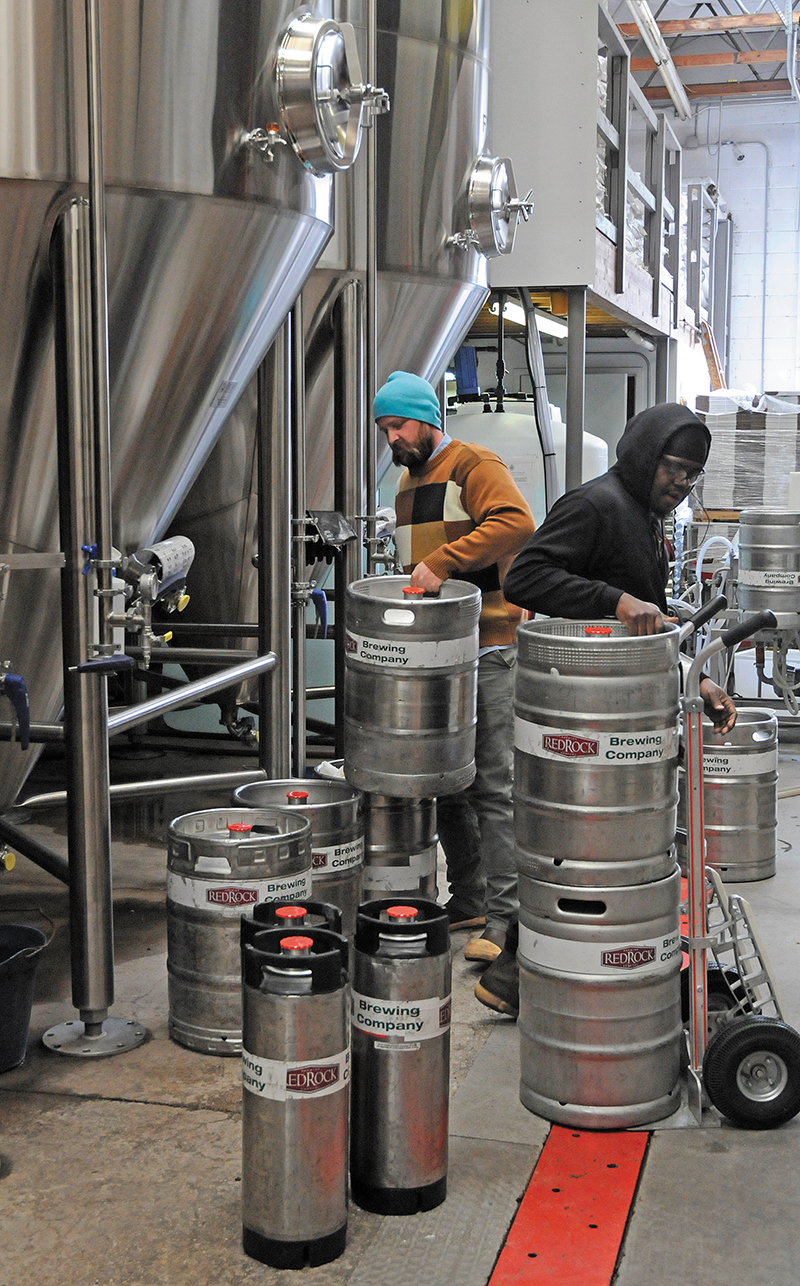 Folks might recognize Red Rock Brewing for its delectable brewpub fixings or its 500-ml. bottles of Elephino: A local favorite, it’s an American-style, big-hop, creamy Double IPA laced with tropical fruits and herbal notes. Others might esteem Red Rock for its Paardebloem—the award-winning, special-edition Belgian-style ale that’s brewed using dandelions as a bitter and sells out immediately with each release. This year, Red Rock had to turn away 200 customers.

Needless to say, Red Rock has flourished in its 22 years of business. “I always tell people that you can only grow as fast as the beer will let you,” says Head Brewer Kevin Templin. In that case, the beer is definitely ready to grow: In just the last two years, Red Rock has grown a whopping 82 percent, and the brewery has recently purchased a plot of Downtown land on which to build a third brewhouse over the next few years. “Our growth in the past two years speaks volumes to Kevin’s talent as a brewer,” says Shantel Stoff, Sales and Marketing Director at Red Rock.

Still, Red Rock is a comparatively small brewery: They’ll brew about 5,000 barrels this year, as opposed to some larger local counterparts’ 100,000 barrels. “We don’t hurry to become big here at Red Rock,” says Stoff. “We definitely are growing, but we’d rather do it right than rush it along.” Instead, the Red Rock crew is able to embrace the latitude and freedom to experiment with and take on new projects, such as representing Utah for the 2016 Craft Beer Week national toast. “Red Rock is just a glorified homebrew system,” says Templin. “We do it all by hand. We get the best raw ingredients and we stay true to style—super local and grassroots.”

To give their customers something to look forward to—and to keep the small team of six brewers on their toes—Red Rock made a goal to release 12 beers this year, one for each month of 2016, and have slated some of their most enticing beers for the summer. Among these upcoming premium, bottled beers are the whimsical White Rainbow, a high-ABV white IPA that puts a twist on the Belgian wit with added American hops, and the intriguing Gineva, a beer “spiced with gin and tonic” and infused with kaffir lime leaves and juniper berries. Red Rock will continue its exclusive partnership, too, with Harmons Grocery—the only grocer that carries Red Rock beers, period—with a popular, light-hop summer ale made with tangerine and grapefruit peel, one of three annual specialty beers presented via the local chain.

Templin is most excited for the tantalizing Forbidden Peach, made with over 733 pounds of fresh Brigham City peaches. “I drove up with one of the other brewers, filled a whole truck up with peaches, brought them back down here, peeled them all, pitted them all and then added them to the barrels,” says Templin. The peach beer defies categorization: In a phrase, it’s a dry-hop, Chardonnay-barrel-aged sour beer, primarily made with the Brettanomyces yeast strain, which takes six to eight months before it kicks in and starts producing all types of funky aromas and flavors. “There’s no real definition to this beer. It could be anything. It could be a million things,” says Templin. “You know what it is? It’s craft beer.”

In 2007, Templin won Brewer of the Year at the Great American Beer Festival—all while brewing 4-percent, reminding the rest of the country that, despite the legal limitations, Utah beer is no joke. As an avid purveyor of craft beer, Templin masterminds most of Red Rock’s offerings, bringing his German-trained and traditionalist sensibilities to flagship beers like the Fröhlich Pils, a crisp and crystal-clear, classic pilsner. “He’s definitely a purist and true to style,” says Stoff, “but he’s also super creative and super talented.” That’s where Templin’s more experimental, category-defying approach comes in, with beers like the CoHOPeration, a rye lager take on the IPA created in collaboration between Templin and the Portland-based Pelican Brewing Co.’s Darron Welch.

As the number of Utah breweries increases and Utah’s beer-drinking population expands, so burgeons the Beehive State’s craft beer market—as well as the support and enthusiasm among the community. Red Rock is continuously growing, with several upcoming new brews: Some pay tribute to time-honored styles, while others continue to push the envelope of the Utah beer landscape (Forbidden Peach, anyone?). For now, though, they’re keeping it small and close to home. “Everybody’s got their own niche,” says Templin. “We want to stay local—we’ve barely touched Utah, the way it’s growing. We’re just good neighbors.”