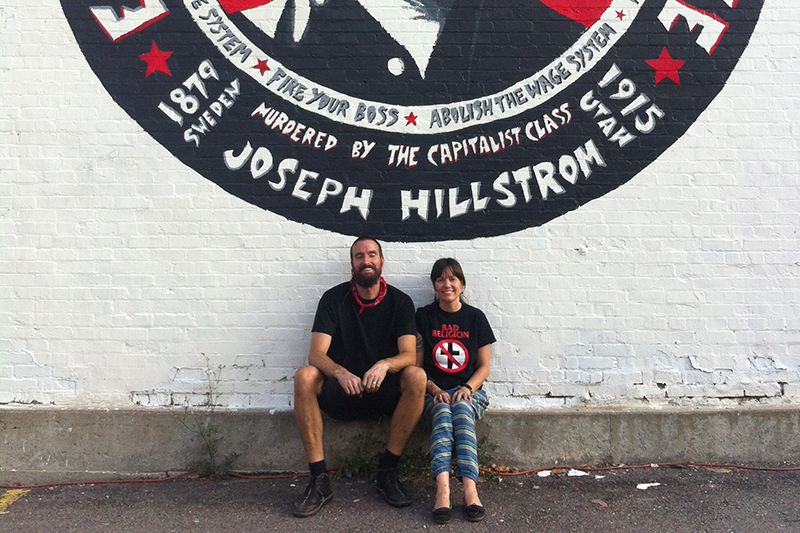 Joe Hill—born Joel Emmanuel Hägglund—was a prominent Industrial Workers Of The World (IWW) musician and agitator who was controversially arrested, convicted and executed for the alleged double murders of John Morrison and his son Arling while working in Utah. The flurry surrounding Hill’s conviction and death sentence generated a great outcry from many of the well-known individuals of his day, including two letters to stay the execution by then U.S. President Woodrow Wilson. Despite this, Hill was executed by the state of Utah on Nov. 19, 1915. As a songwriter, Hill was, in many ways, the bard of the labor movement, and, ironically, the subsequent result of his death is a long-lasting legacy of martyrdom within the labor movement.

Nov. 19, 2015 will mark the centennial anniversary of Hill’s execution. In preparation for the anniversary, The Salt Lake Tribune Director of Photography Jeremy Harmon began compiling material detailing the events surrounding Hill’s life and exploits as a labor activist. “It started with me and this reporter, [Tom Harvey], deciding we were both interested in working on it,” he says. “We started gathering information and started getting cool stuff. We tracked down some descendants of the father and son who Hill was convicted of killing and we set up an interview with them. Our first meeting with them, it became very clear we were onto something a lot bigger than any of us had imagined.” The research yielded information about the significance of Hill to the labor movement of the 1910s. One of Hill’s greatest contributions to the struggle was his music, which was straight to the point and catchy.

As with many protest songs of the day, Hill used well-known hymns and tunes as the foundation of his songs. Many of these numbers, songs like “There is Power in a Union,” “The Preacher and the Slave,” “Casey Jones–The Union Scab” and “The Rebel Girl,” were readily available to Union members in a collection called the Little Red Songbook, or IWW Songs to Fan the Flames of Discontent. Easily accessible, his material served to agitate and raise the morale of the Union members on the frontlines of the labor struggle. One particular song, “Mr. Block,” addressed the folly of not joining the union. Written in 1913, it quickly became a popular tune with strikers—especially when confronted by the police or private security. “Joe was an agitator,” Harmon says. “He wasn’t necessarily an organizer. His songs would stir people up. But then you needed somebody with some great charisma [to] come in behind the agitation and say, ‘OK, all of you are mad as hell about what’s happening, here’s what we’re going to do about it.’” Beyond simple agitation, they serve to remind singers and listeners alike that the power to make change is in organization.

While several IWW members lost their lives in the labor struggle, Hill’s presence is one that defiantly survives being shrouded by the pages of history, simply because of his music. As if premeditating the timelessness of his music, Hill once said, “A pamphlet, no matter how good, is never read more than once. But a song is learned by heart and repeated over and over.” It would seem that his legacy is in good hands, as his songs live on through well-known musicians like Pete Seeger, Utah Phillips, John McCutcheon and Billy Bragg. To celebrate his influence, the Tribune commissioned local bands to perform some of Hill’s songs, including Folk Hogan, The Utah County Swillers, Andrew Shaw and Six Feet in the Pine.

Even in death, Hill remains a figure of contention. Local musicians and artists Josh and Heidi Belka honored Hill by creating a captivating mural on the side of their International Alliance of Theatrical Stage Employees (IATSE) union building. “We put up a Joe Hill mural on the union building—which was approved by the membership two years ago—and we wanted to get it done by the Joe Hill centennial,” says Heidi. “We wanted to get it done before the IATSE District 5 meeting—who actually paid for much of the materials for the mural.” The mural was created over a weekend, with over 90 hours of labor put into it. Josh adds, “It was a lot of work.”

Unfortunately, the life of the mural was cut short. Offended IATSE members vandalized the mural by painting over it with stars and stripes—as if suggesting that Hill was not a patriot because of his pro-labor/anti-capitalist rhetoric. “I personally see a lot of irony in it,” says Heidi. “One, they did it in the cloak of night—how American that was of them. Two, they painted a flag that’s supposed to represent freedom over a man who died for our freedoms. Oh, and the biggest irony of all is that we are a stagehand union that represents entertainment employees—why are they censoring art?” The original mural lasted only eight days, but another, recently commissioned by Ken Sanders Rare Books, can be found on the bookshop’s northern wall—courtesy of the Belkas.

Hill’s music is timeless: It describes the struggle against inequality—a topic that is still relevant today. To celebrate Joe Hill’s legacy, readers can check out Joe Hill biographer Bill Adler at Ken Sanders on Nov. 18, a vigil held at Sugar House Park on Nov. 19, and folk legend John McCutcheon at The State Room, also on Nov. 19. To read more about Joe Hill, be sure check out the The Salt Lake Tribune’s site: joehill.sltrib.com.