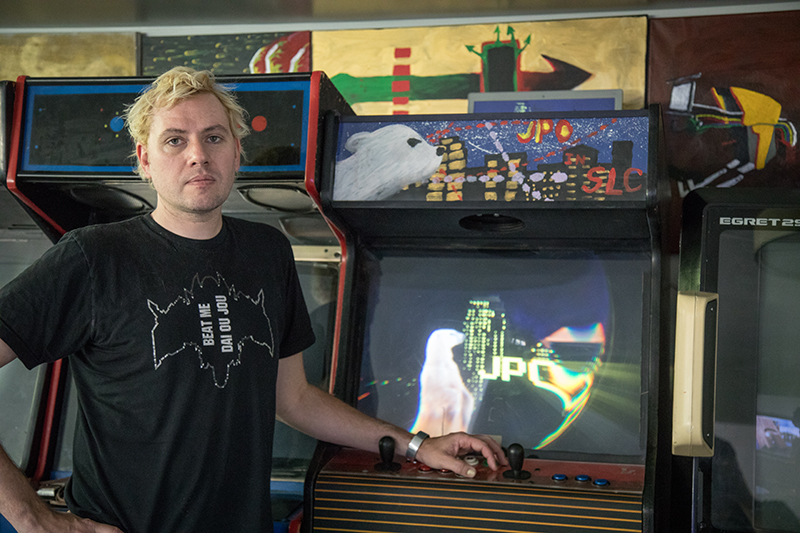 Music is rarely the foundation for a video game. Usually, games license or commission their music, but JPO in SLC does the opposite. David Payne of Rest 30 Records is finishing his first original game built around the music of his brother’s band, the Joshua Payne Orchestra. As one of its members, David wanted to recreate the dreamy experience of playing with the band through Salt Lake’s forgotten places. “From 2009 to 2013, Joshua Payne Fearlessly Led the Group,” the intro reads. “The Joshua Payne Orchestra. This is their story …”

You play as David’s brother, Joshua— represented by a polar bear. The nine-piece orchestra bellows as you, the polar bear, move through a glittery Salt Lake, shooting down drones and flying metal beasts. “The game is an exaggerated documentary,” says David. He remembers, “We would play weekly at midnight … in places where we felt the cops wouldn’t shut us down—alleys, pavilions, garages and under bridges that we felt were neglected enough.” Each night, the band attracted loyal crowds ranging from 10 to 60—unpredictably. In the game, lasers appear unpredictably, instead of crowds. The gameplay complexity sits in for the artistic challenge and courage of onstage performance. “The gameplay is tailored in many different ways to reflect the experience of playing with the group,” says David.

But while it may exaggerate in its gameplay, JPO in SLC is still a journal of the band’s emotional journey. “I was trying to convey, utilizing the shmup genre, how in-the-moment, how fearful, how vulnerable and how emotionally and physically difficult it is to perform music,” he says.

Made using a third-party software, this is potentially just the start for Payne, who plans to continue game development if JPO wraps up well. JPO in SLC will be available to play in cabinet at the DIY Fest STEM Building for free. Think of it this way: Rest 30 Records’ first game is unlikely to be its last—be there for its first. –Parker Scott Mortensen