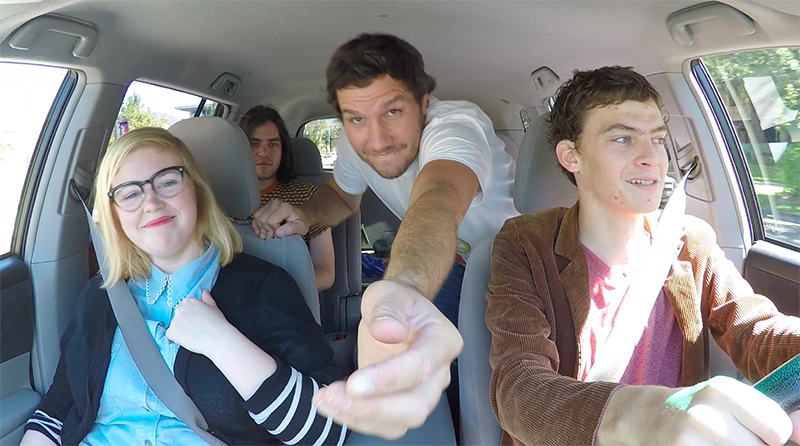 If you haven't caught a glimpse of the Aussie born Utah transplant, you should get to know him by the fruits of his labor: his brilliant and hilarious local YouTube phenomenon, Comedians in Cars Eating Vegemite.

Rich Wilson is a name you might have heard in various bars and comedy clubs in Utah. He’s a guy who mostly hangs out in the shadows, does his five minutes of stage time and doesn’t get into fights with hecklers. However, hidden in that quietly humble façade is a comedic talent bursting at the seams in multiple formats and outlets. If you haven’t caught a glimpse of the Aussie born Utah transplant, you should get to know him by the fruits of his labor: his brilliant and hilarious local YouTube phenomenon, Comedians in Cars Eating Vegemite. After a pretty low-key open mic night in the heart of Downtown Salt Lake, Wilson took a few minutes to chat about what really goes on inside the mind of a creative.

Wilson’s story starts during his teenage years, when his family moved to Utah from the suburbs of Sydney, Australia. You can still hear little clues of where he’s from in his speech, but Wilson now claims Utah as his home. “I can’t really claim that I’m from Australia, since I’ve lost my accent,” he says. As an adult, he moved to Bountiful, got married, had kids and settled down.  He didn’t have much culture shock in Utah, and coming from an entirely different country had its ups and downs. “The accent really buys you a lot of friends, but it gets you friends you don’t really want,” he says. “A lot of girls like you for just superficial reasons, like he’s got an accent’, but they quickly find out that you’re just a nerdy kid who likes Star Wars and skateboarding, and they quickly leave.”

He entered into the comedy world about five years ago, when he went looking for something new to try. “When I turned 30,” he says, “I tried a Wiseguys open mic for the first time, and I did really bad, but it kind of planted a little seed. It really felt like that scene, that crowd, those kinds of people, were really where I felt comfortable. I felt like I wanted to be in that environment.” At the time, he needed a new creative outlet, something that would provide more instant gratification. “I live in the Davis County suburbs,” he says. “Everyone’s got their houses; everyone reads Pottery Barn catalogs, has granite counter tops and stainless steel—It’s all about that kind of lifestyle, which is fun for a little bit, but I just need a creative outlet.” He felt liberated by the comedy community at large, and has no intention of ever making this a full-time paid gig. “You just kind of have that need,” he says.

Once involved in the comedy scene, Wilson decided to use his outlet to bring even more of a creative element to the table on the side. “I originally wanted to start a podcast just interviewing comedians in town, but so many people have podcasts,” he says. “But also, I’m not very good one-on-one with people.” He decided to make it a short YouTube show instead, kind of in the vein of Jerry Seinfeld‘s Comedians in Cars Getting Coffee, but with an added Australian element: the staple spread, Vegemite. His main goal was to pull comedians out of their comfort zones. “Since they are all naturally funny people, you’ll get funny responses and reactions from eating Vegemite, plus a fun conversation to go along with it,” he says. It’s a simple concept—“I’m gonna drive around in my car, eating Vegemite, and I’ll film you,” he says—with results that are mixed but never dull. At first, Wilson just recruited comedians who were at the open mic nights. The plan involved Wilson driving, with the camera fixed on the guest comedian. Local comedian Alex Velluto was the first participant along with Jordan Makin. Wilson figured it would be a better show with a better story if he just let the two comedians drive the conversation and banter together. He then edited the completely unscripted footage and added visuals and music.