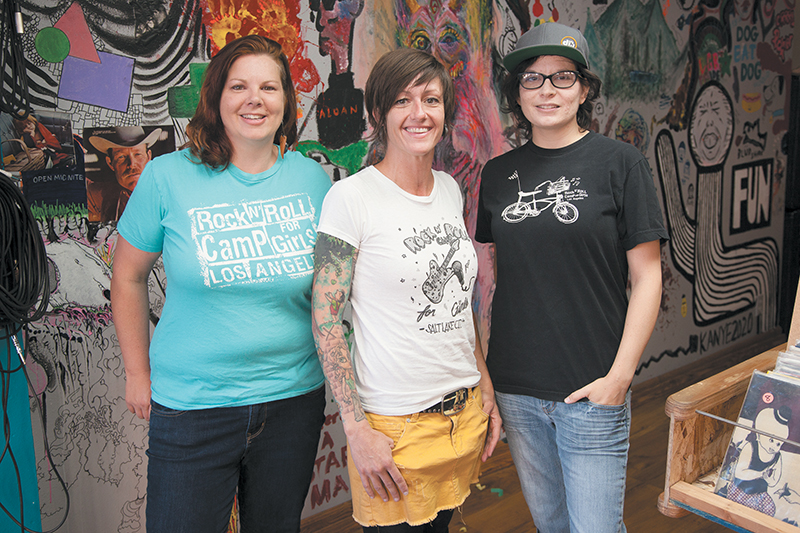 As we all know, Salt Lake City has a killer music scene. However, the majority of rock bands are predominantly made up of men. Three local women—Amy Stocks, Secily Saunders and Hillary McDaniel—recognized this and came together with their respective music backgrounds to create the future of our music scene by starting Utah’s first Rock n’ Roll Camp for Girls (RRCFG – SLC)—an intensive, week-long, volunteer-run jam session where girls ages 8–18 come together to write, design, practice and perform a song with a newly formed band. The campers also attend empowering workshops that teach them music and women’s history. The camp isn’t a franchise, but it is part of the Girls Rock Camp Alliance, which RRCFG – SLC models its structure on.

Camp Director Stocks, a force of energy and altruism, has extensive experience working with teen organizations and homeless youth. Inspired by Boston’s RnRCG three years ago, she started a co-ed camp in her hometown, Moab, Utah. Music Director Saunders is a multi-talented musician who plays in numerous local bands such as Elytra and Canyons and has been music-directing after-school programs School of Rock and Music Garage. After Portland’s RnRCG sparked her initial interest 12 years ago, she began volunteering at the L.A. branch, and did so this last summer with Assistant Director McDaniel. McDaniel, drummer for Canyons, aids Stocks in recruitment, fundraising, website creation and more. “The girls are surrounded by female mentors,” says McDaniel. “They see women doing every aspect of it. That’s a powerful thing to take away.” Although the goal is to have 80-percent women-identifying volunteers, RnRCG does not discriminate based on sexual orientation, gender or gender expression, and encourages anyone who wants to volunteer to do so. Stocks mentions that the camp intends to include pronoun and gender-identity workshops in the future. Stocks says each morning “is going to start with punk rock aerobics.” On the very first day, the “Picks” (ages 8–12) and “Sticks” (13 and up) are sorted by instrument into their new bands. Throughout the week, they attend workshops, such as History of Women in Music, Image and Identity, Printing, Song Writing, Starting a Zine and more. After workshops, there’s lunch and band practice. The girls have one week to complete and perform their songs—even though some campers have never picked up an instrument before. “It does sound crazy,” says Saunders, “but by the end of the week, you’re crying tears of joy.” Though the camp is challenging, the directors all agree that the girls’ transformations and achievements are the best part about camp. “Music is a really tiny part of it,” McDaniel says. “It’s really about what’s inspiring for women and girls [and] empowering them with information and knowledge.” Stocks admires the way the campers break through their comfort zones to “demystify all the things they thought were unreachable for them,” she says. Rock music encourages women to enter a space they’re typically barred from: a LOUD space. Volunteer Kate Anderson says rock music has a way of “letting a guitar scream for you” that other genres do not.

Saunders mentions that their goal is to create a rock camp for women in SLC that will change the rock culture and make the music scene more empowering and inclusive for women. “We’re gonna bring it!” says Stocks. The co-founders want to challenge the current scene. “We are picking at the fabric of patriarchy. Utah may seem like a big obstacle, but it really isn’t,” says Saunders. She presses the importance of encouraging young girls to get into music. “When you’re isolated in your own scene, especially as a female, it’s hard for you to see past that. Everyone I’ve talked to thinks that the camp is needed.”

The application process isn’t competitive: It’s first-come, first-served. Campers list their top three choices of instruments and are encouraged to be willing to learn a new instrument. Additionally, the camp does give a small amount of financial aid to those who need it. “We want to make sure you can go to camp,” Stocks says. Even so, running a camp is expensive. The most helpful way to support RRCFG – SLC would be to sponsor a camper, donate to the camp or lend old music gear. If you’re like me and pumped about this camp—yet also super broke—you can volunteer, but the best way to support the camp is to attend the girls’ showcase, which is a night of music by the RnRCG bands! “It’s open to the public and is a fundraiser for the camp,” Saunders says. The showcase is Saturday, Aug. 6, and the venue is to be announced soon.

If there’s one final thing the directors want future campers to know, it’s that they already rock. Rachelle Danis, another camp volunteer, advises the girls to “appreciate your differences and work together.” Beyond this, Stocks wants every girl to know that “their voice matters, no matter how loud or quiet they may be.” Lastly, Saunders asks of the campers and volunteers involved: “Please make mistakes,” she says. “Don’t be scared to make them. That’s where you’re going to learn the most.”