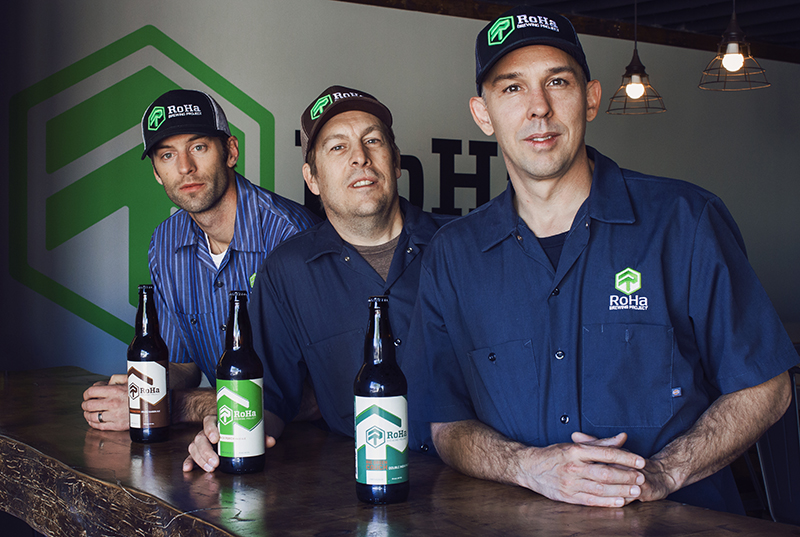 The morning sun poured signs of summer into the small taproom through the floor-to-ceiling windows the Saturday morning after RoHa Brewing Project’s opening night. I sat at the bar with the three partners of RoHa, Chris Haas, Rob Phillips and Josh Stern. I felt immediately comfortable in the uncluttered taproom, decorated throughout by RoHa’s geometric green-tree logo. We settled in by discussing the differences between the Jerry Garcia and Grateful Dead Pandora stations, shamelessly enjoying the signature Back Porch Pale Ale at 9:30 a.m.

RoHa have spent the last year wrangling permits and licenses for the brewhouse, taproom and the bottle shop, all situated in one location at RoHa Brewing Project. Each aspect requires an individual state and city permit, but no special permit to house them together. “Each step takes a lot of time,” says Haas.

A distribution brewery permit involves a long process with the federal government, however. “They review any label and packaging being sold for human consumption,” says Stern. The Thursday IPA label states that it pairs well with three-day weekends, Hibachi grilling and the powder flu. “The feds weren’t too stoked about ‘the powder flu,’” says Haas. “After we explained the skiing aspect, they said, ‘It seems to me you are encouraging people to ski and drink.’ We basically wrote back saying, ‘It’s not illegal to ski and drink,’ and told them to Google it,” says Haas. After a few rounds of emailing, and probably a Google search, the federal government approved the term.

RoHa opened their doors on April 21 with two on-draft beers, both sitting at 4-percent alcohol by volume (ABV). The Back Porch Pale Ale is a classic American Pale Ale, while the Three Deep American Ale is lighter in malt, topped off with a touch of hops. RoHa plans to introduce the two lower-point beers into bars, restaurants and grocery stores throughout the Wasatch Front.

RoHa also offers three higher-grade beers for sale in their retail corner. The Thursday IPA (6.5 percent) is a quintessential IPA with a distinct, hoppy kick. The Big Green Couch Double IPA (8 percent) is drier and far less rich than most double IPAs, enhancing drinkability. “It’s scary-easy to drink at 8 percent,” says Haas. Haas flexes his innovative brewing abilities with The Kensington Grand Saison (6.8 percent). “We use juniper instead of coriander, bitter and sweet orange peel and oak wood, which rounds out the harshness of some of the spices,” he says. Haas compares a good saison to a good pizza: “You should be able to taste everything, and not just one ingredient.” The Kensington may have made a saison drinker out of me.

Each beer name emphasizes RoHa’s accumulated knowledge of the brewing business, the culture they cater to, and their mission as a company. The Three Deep “is a really sessionable beer,” says Haas, laughing. “You can also get three-deep pretty quick.” The Thursday is an ode to their tradition to try a new beer each Thursday, detailing it in their beer journals. “We nerd out about beers,” says Phillips. “We write about them and save the labels.”

Each beer can be purchased at RoHa, some in large, 22-oz. bottles to be enjoyed in pint glasses, others offered in cans. RoHa knowingly tailors to people who want quality, packable beers in outdoor settings. “Canned beer is convenient,” says Haas. “When you’re biking, you don’t need to worry about broken glass.” Stern, the fly fisherman of the group, says, “They’re great for the river, too, because you can’t have glass out there.” Whether you’re hitting the slopes or cruising single track or floating jetties, crush the beer, crush the can and stash it. In reality, too, “It’s better for the beer,” says Phillips. “Two things are really harsh on beer: light and oxygen. Cans stop both of those things.”

The RoHa taproom location is accessible and surrounded by other local businesses, most of which supported RoHa on opening night. “This area really lights up around the ballpark, too,” says Phillips, which they hope will draw other people looking for the small, local-brewery feel. “We wanted to be in an accessible location so it’s walkable or bikeable to our craft beer drinkers,” says Stern, which he notes is essential to building a brand.

The Utah brewing community has shown their support, too: “We had people in here from Squatters, Wasatch, Proper, Fisher and Bohemian,” says Haas. “They all came because we try each other’s beers.” Stern points to the power of cross-selling: “The better job we can [do to] cross sell, sending people to other breweries and vice versa, the more beer-educated people become,” he says. Also, locals become more invested in the beers they drink and the businesses with which they interact.

For RoHa, opening a brewery anywhere else was out of the question. “In 30 minutes, I could be skiing,” says Haas—”And then mountain biking on the same day,” says Phillips. Adds Stern, “The world’s best place to have a brewery is where you’re sitting right now.” RoHa hopes to tailor to millennials exploring craft beer as well as the older generations who’ve been drinking craft beer since the early ’90s. From outdoor concerts to dawn patrol, RoHa’s main objective is to deliver rockin’ beers that force you to slow down and enjoy the simple life in a community of down-to-earth brewers and beer drinkers.