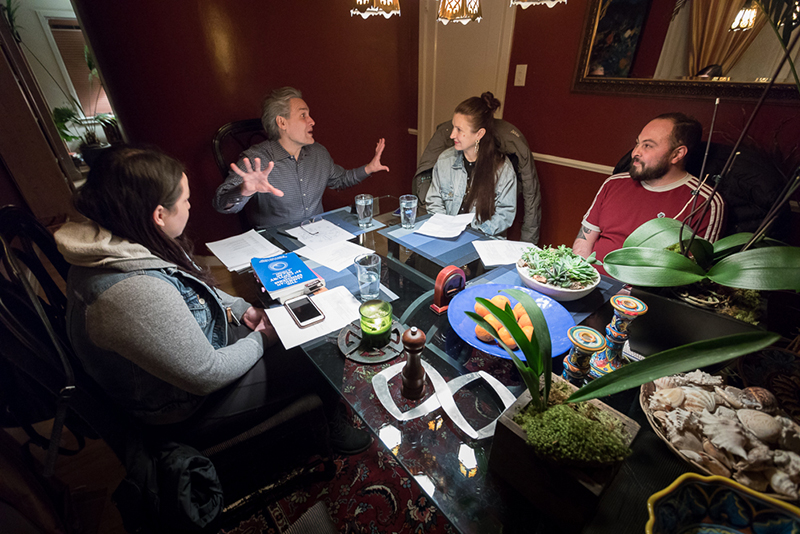 “The theory with astrology is that really anything born into time has a horoscope. That could be a person, a state—that could be a business; that could be a chicken,” says Christopher Renstrom, who has been the astrologer for the SF Chronicle since 1997 and SFgate.com since 1999. Starting with reading tarot in New York City at Studio 54, Danceteria, the Roxy, Mud Club and Area in the ’80s for celebrities like Madonna and Cyndi Lauper, Renstrom went on to study under Carolyn Asnien, the prized pupil of Zoltan Mason, and has been a practicing astrologer since 1985. As a practice that has been studied in multiple parts of the world since the 2nd millennium BCE, astrology is Renstrom’s tool for piecing together a story about a person or entity and using that information to interpret possible paths for the future.

The chart laid out in front of him is for the date Dec. 1, 1988, at 7 p.m., and the birthplace is listed as Salt Lake City. However, this particular star chart is not made out for a person. Rather, it is the chart marking SLUG Magazine’s “birth”—the first issue “hitting the streets” at Speedway Cafe at the tail end of 1988. (December 1988 was our one issue from that year and thus our real birth year, despite the fact that we usually represent our inception as 1989, since it hosted a full year’s worth of publications.)

Twenty-nine years later, SLUG Magazine has undergone many changes and has survived the challenges thrown in its path, continuing to thrive as a source of information on the scene both locally and elsewhere. Having come to its 29th anniversary, SLUG Mag is also entering its Saturn Return, an astronomical event that takes place when Saturn returns to the place in the sky where it was at one’s birth. This event usually forebodes difficulty, struggle and unprecedented change—so we asked Renstrom to look into the SLUG’s birth chart to help us navigate the next chapter in SLUG’s life.

With the date of this first issue’s distribution established, Renstrom mapped out a chart of where all the planets were in the sky on the evening of SLUG’s inception. We start with the one that most people would immediately recognize: the sun sign, the sign most people would read their horoscope under. Changing once a month, the sun sign marks the constellation where the sun can be found on the “date of birth.” The sun sign is responsible for assigning general attributes and characteristics to a person, or in this case, a publication. SLUG Magazine, we have found, is a Sagittarius.

The symbol for Sagittarius, depicted as an archer on horseback or sometimes a centaur, is associated with nomads and warriors, and is centered around the idea of adventure and community. “Part of the Sagittarian mindset is welcoming and philanthropic,” Renstrom says, stressing the fact that Sagittarius can sometimes have an “everywhere but here” mentality. “[Sagittarians have] a fascination with different societies, foreign cultures, people from different worlds. They’re the explorers of the zodiac, the adventurers, the people who want to get out to see how everyone else is living.” Whether providing coverage of local or touring bands, talking about the world of cycling, or reviewing restaurants influenced by different cultures, SLUG has a way of highlighting how Salt Lake City coincides with the rest of the world while clearly being rooted in one geographical place.

As a fire sign, Renstrom explains, Sagittarius is driven by their beliefs and morals, despite having a penchant for being “party animals”—perhaps why SLUG always goes all out for anniversary parties (including this year). Additionally, Sagittarius is ruled by the planet Jupiter and receives the attributes of the god with the same name. While Jupiter is known for his “jovial” spirit (the word jovial comes from Jove, another name for Jupiter), Renstrom points out that Jupiter is one of the gods who took the most interest in human affairs and was also associated with textiles, or a “weaving” together of the fabrics of different stories. The contributors and staff members of SLUG Magazine often have different aesthetic/music tastes and different interests, and SLUG’s eclecticism resonates with this part of the reading, as the magazine’s success can be attributed to the diverse nature of varied topics—from beer to literature, from visual art to snowboarding—and each contributor’s individual voice.

One interesting detail found in SLUG’s birth chart was a waning moon in Virgo at the bottom of the chart, acting almost as an anchor for the chart itself. Renstrom hints that this may mean that SLUG Magazine’s creation may have had a strong female influence, even from the beginning. “Women must have played a role in the founding of the magazine and of the thriving and continuing of the magazine,” says Renstrom. While women, specifically SLUG Executive Editor Angela H. Brown, are certainly at the forefront of SLUG Magazine in its current state, hearing this information sparked the SLUG staff’s interest. While it’s currently not completely known if there were women involved with SLUG’s initial creation in the late ’80s and early ’90s, the current, feminist undertone of the magazine may have more of its roots in the formative period of SLUG than previously thought.

“There’s almost a strange, old energy to the magazine right off the bat,” says Renstrom, who speculates that there may have been other zines that were SLUG’s predecessors. Additionally, “There may be an ethos or point of view that may be very connected to the underclass, the outsider or the disenfranchised.” Renstrom says that SLUG Magazine is an outlet for voices that aren’t often heard in the community. Indeed, the magazine started out as founding Editor J.R. Ruppel’s way to get coverage of his band in a publication, which thereby opened up the floodgates for zine-style discussion of SLC’s punk/underground culture and shows. Continuing in the present day with an array of coverage that discusses people and phenomena in our community—from local DIY Festival artisans, craft distilleries sourcing locally, mom n’ pop restaurants, independent film, etc.—SLUG Magazine certainly fits this description. With SLUG’s evolution and  inclusion of other subjects, genres and a wider range of people contributing their point of view, Renstrom’s reading resonates.

Another element that adds to this narrative is the appearance of Mercury cazimi in SLUG’s chart, which means that Mercury was directly in front of the sun at the time of SLUG Magazine’s “birth.” Having a planet in this position emphasizes the attributes associated with that planet. Renstrom explains that Mercury, the messenger god, is an ideal planet for any periodical or magazine to have cazimi, or “resplendent.” What this means for SLUG is that being a “messenger” is at the core of what we do, especially conveying crucial, short-term information to the masses. Organizing and covering events such as Localized showcases, previewing art gallery openings, or highlighting skaters is SLUG’s way of putting Mercury cazimi into effect; rallying Salt Lake City and Utah together around these locals and events.

Despite the fact that SLUG Magazine’s Saturn Return is being celebrated with the March Localized and is the theme for this year’s anniversary party, the Saturn Return, for many who practice astrology, is known to bring hardship and struggle along with it. Renstrom, as an astrologist, is careful not to sugarcoat the Saturn Return for his clients, though he does have a generally optimistic view about what the Saturn Return can mean. “It was the planet of time,” he says. “It took so long [to cycle around the sun], it was the thing you had to contend with: Were your successes going to stand the test of time? Were your victories going to be remembered?” Astrologists typically regard Saturn, associated with the old god that Jupiter overthrew, as one that can signify ruin and destruction—but with that ruin, there is also a wisdom of experience.

The first Saturn Return is seen more as a time to reflect upon successes and failures, and a time of taking on more responsibility and change. As a free magazine that has thrived as a small business with a dedicated staff in collaboration with stories, art and photography from contributors for almost 29 years, the fact that we’ve made it to our Saturn Return is a feat in itself and a milestone we’re proud of. This period of the Saturn Return, which can last up to three years, is a time to question whether the foundation and brand that SLUG Magazine has built for itself is stable, and to move forward, keeping the integrity of what makes SLUG Magazine successful, even if that means going in new directions. “Saturn might reduce you down to the basics, but it is in order to build you up again, and on a stronger foundation,” says Renstrom. He suggests that even though change might seem painful, it is oftentimes necessary in order to move forward.

For Renstrom, the Saturn Return is a chance to reevaluate everything that has happened in the past and use that to shape the future. He says, “Are we slaves to history, or are we moving in a different direction?” Whether or not the Saturn Return helps us embrace the future, making it to SLUG Magazine’s 29th anniversary (and first Saturn Return) of being a collective voice of the underground community in Salt Lake is enough cause to celebrate.

Join SLUG for our anniversary-special edition of Localized (pg. 6), with performances from DJ Nate Holland, UTA Trax and DJ Thoroughbred at Urban Lounge (21+) and SLUG Mag’s Tarot Card Lounge next door at Rye (all-ages) on Friday, March 16, at 9 p.m. For more information on astrology and to contact Christopher Renstrom for personal readings and astrology classes, visit rulingplanets.com.