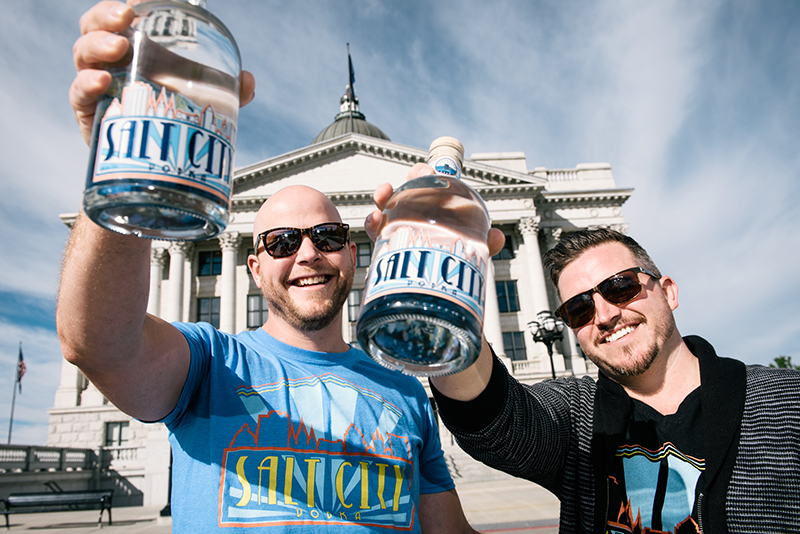 After years of grinding in the workplace, friends and business partners Aaron Ilott and Jesse Farrer of Elevation Distilling started brainstorming ideas to create their own business with a goal. They wanted to create something they’d go for themselves. Being predominantly vodka drinkers, Farrer says it was a “no-brainer” once they honed in on their plan to start a distillery in their home state. But they didn’t just stop there: Their ultimate goal was to craft a vodka to drink straight.

Vodka doesn’t really have the classic “liquor on the rocks” ring to it like whiskey does, but like most liquors—if made right—it can be palatable on its own. Ilott and Farrer tout their flagship product, Salt City Vodka, as a vodka so smooth that one can drink it without adding the frills of a fancy cocktail—although they aren’t opposed to experimenting with recipes in the slightest. This isn’t just a claim: I’m a sensitive drinker, but with just a splash of sparkling water and citrus, it’s a sipper you could easily get yourself into trouble with. Lacking the harsh bite that vodka typically packs, it carries a lightness that runs down the throat like silk.

Using 100-percent sweet corn and 100 percent of Utah’s mountain-fresh water, distilling seems like it should be a pretty straightforward process, but there’s a lot of scrutiny during quality control, which the duo take seriously. Not that it’s a chore—they’re all about perfecting the process so that not only can they enjoy their product, but their friends and family can enjoy it, too. “It’s easily a top shelf taste and product, but we price it at $19.95,” Farrer says, since “we’re average Joes … and that’s the price we want to hook up our locals with.”

Far from happening overnight, the two started scheming about seven years ago, spending their first business trip in a shady motel at a distilling conference in Denver, scratching notes diligently on napkins. Despite friends and family trying to talk them out of such a high-risk business, the two put all of their eggs in one basket, tossing in their 401Ks and life savings, since loans were not in their favor. “Knowing that you put everything into one endeavor led us to not having an option to give up or back out,” Ilott says.

It also means that everything you see—from the website to the label design, the corking and delivery—is all done by Ilott and Farrer. While this gives the two of them the flexibility to test the limits of their imagination, it also means that the blows can hit pretty hard. Utah’s known for tight restrictions on liquor, but distilleries were a new battleground when they were just getting started. At the time the two were applying for licenses, Salt Lake didn’t even know how to zone their business, since distilleries weren’t on their records.

On top of the codes of regulations they had to sort through just to get the licensing, they had to prove that there was a physical location where all of this was going to take place. The two almost found themselves in a catch-22, where they couldn’t do anything with alcohol until their licenses were granted, but also couldn’t start their business without the licensing required to create their product. They ultimately had to persevere by paying the lease on an empty building for about a year and a half before they were granted the licensing. “And that’s all in the hopes that everything works out, that at the end of the day, someone says yes,” Ilott says of the painstaking process. Farrer says, “It’s a constant bucket of problems, but it’s fun. It’s the right business for us to be in.”

Since the two of them handle all hats of the business, it also means that you’re able to enjoy a quality product at an affordable price from our neighbor. When asked about expanding the business to other states or to include other products, the two seemed excited, but with caution. While Farrer gleefully reminisced the first time “seeing [the vodka] on the shelf staring back at [us],” the two want to keep it as local as possible for now. After they work through all the production kinks and feel comfortable with their process, they’ll start adding new flavors and varieties. “That’ll be the next surreal moment, when we have two products on the shelf,” Farrer says. However, Ilott adds, “We won’t launch anything until it’s perfectly dialed in and it’s something that we’re comfortable not just to stand behind but to show off.”

The two use social media to promote and engage with their customers as much as possible, with authenticity evident in their interactions. Follow them on Facebook and Instagram (@saltcityvodka) for recipes, to catch which restaurants and bars feature their drinks, learn about upcoming contests (I heard rumors of a “Golden Ticket” contest in the works), cat-related business and more. For a holiday drink, the two suggest their vodka blended with a pear puree, a little bit of lemon and lime, and a dash of bitters topped with a cinnamon dusting. Drink up!