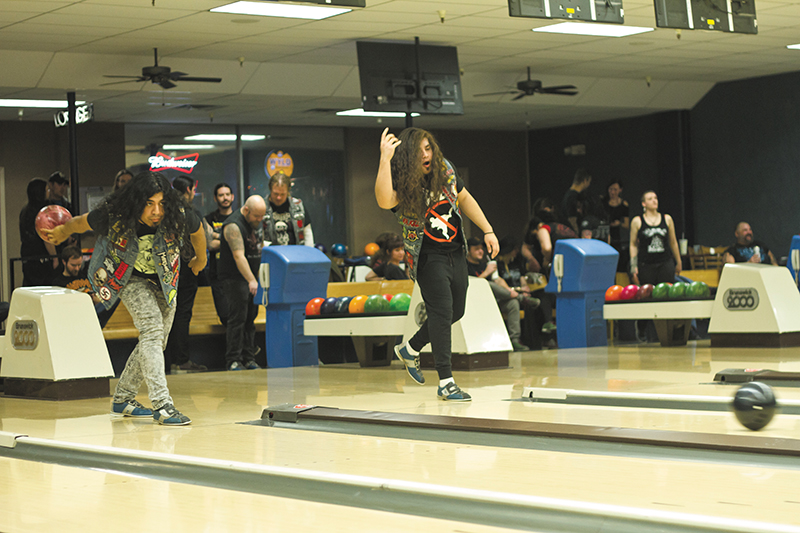 Bowling balls hurled with the goal of crushing 10 pins in a clattering of sound—that’s pretty metal. Add the sounds of bands like Grand Magus, Venom and Absu to the denim and leather warriors hurling those balls—that makes bowling pretty damn metal, as are the friendships made in the common interest of all that is heavy metal. That’s the goal that Salt Lake City Metal Bowling League creator Melissa Zappa had in mind when she started the league at Bonwood Bowl in mid-October, 2015.

Zappa, who is relatively new to Salt Lake City, formed the league out of the ideals of her previous home of Portland, Oregon, which has a metal bowling league that fills up 30 lanes of a bowling alley. “One of the reasons I chose to move here was because I knew there was a thriving metal scene here,” says Zappa, “and I figured it would be a way to bond with the [metal] community and bring us together, not at a very loud concert.”

To get the word out that this league was going to happen, Zappa and co-creator of SLC Metal Bowling Gabriel F. Danilchik went old school and grassroots, putting fliers up around town and handing them out at concerts. Now, a Facebook group called SLC Metal Bowling League exists to help spread the word and get folks the information they need to start or join a team.

Zappa wanted Bonwood Bowl to be the alley of choice because of its proximity to Salt Lake City. She talked to the manager to see if they were accepting new leagues and if leagues could play their own music. “[Music is] a deal breaker—if we can’t play the music we want, we’ll go elsewhere,” she says. Zappa says that the manager mentioned that he liked Iron Maiden. Zappa responded by saying, “It’s going to get a bit more extreme than that—like, I want to prepare you for this. I don’t want people screaming and turning the music off, like, ‘What is this abomination?’” The manager said that as long as there are no F-bombs, it was no problem. Music playlists were then decided upon at the beginning of the season, with a raffle to determine which member gets to create a playlist for which night. Interestingly enough, the first couple of weeks of the metal league’s night to play the alley, the manager said other patrons were going to the front desk and asking for the music to be turned up. “They’ve been way more supportive than I’ve ever dreamed they would be, and they love us, so that’s been really, really cool,” Zappa says.

The league’s first season consisted of seven teams of three people each, with team names such as Pin Lizzy or Balls to the Wall. With local musicians from the likes of Deathblow, Moon of Delirium and Visigoth rolling their balls, it’s a great way for other musicians to talk about their bands. “It’s a good time to get drunk and meet up with some people that I know and don’t know, make new friends and make fun of old friends,” says Eldehelm Erickson, member of Gravecode Nebula and Odium Totus.

Because SLC Metal Bowling is an official league, they need to stick to the league rules. Bowlers who want to participate must commit to attending or otherwise find a suitable substitute for themselves. Aside from that, Zappa says that the bowling is the least important part of the league. Everyone can bowl—there is no required skill level. There is a competitive spirit, but bowlers can go at their own pace and skill level. “If you are somewhat interested,” Zappa says, “come out and be a sub. That’s the easiest way to check it out, because there is not a commitment. If you like it and feel like your schedule would accommodate it, you can decide from there.”

Unlike a bar show, all ages are welcome, and your metal genre of choice is irrelevant. “We’re a super-friendly bunch,” Zappa says. “We’re all united in metal, so there is something that you have in common with somebody here—favorite shirt, favorite patch. Something will get somebody talking to you in about five seconds, so you will have a pretty good family of friends after a couple nights of bowling.” For Zappa, it’s all about building that local community outside of concerts and creating more opportunities for the scene and the heavy metal family. The more time you spend together, the more friendships you can build.

The next season of the SLC Metal Bowling League starts Tuesday, Jan. 19, and continues every Tuesday night at Bonwood Bowl on 2500 S. Main St. in Salt Lake City. The best way to join the community right away is to join the league’s Facebook group page. From there, you can get information, talk to league members, find a team, or make your own. At a cost of a lot less than most concerts—$10 per week for eight weeks—just commit to your team and crush those pins.