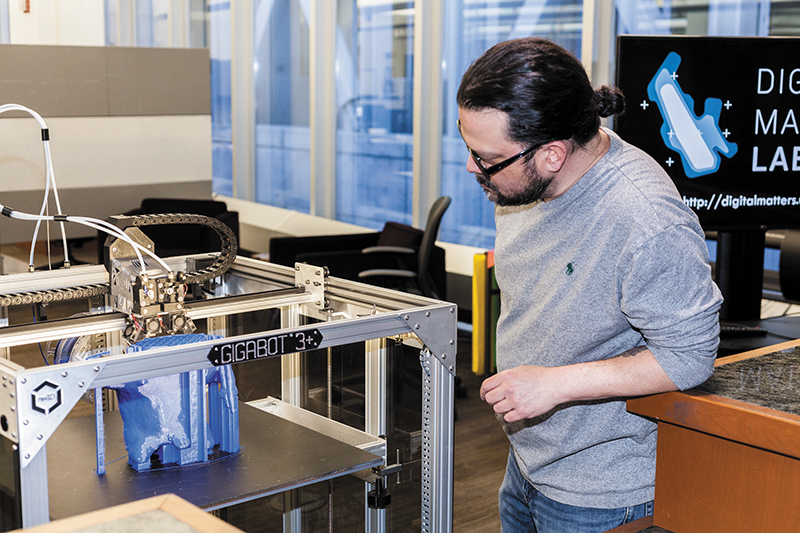 Local artist Horacio Rodriguez is a hybrid. A sculptor, his work reflects the blend of who he is. His ceramic boombox, recently shown at a University of Utah faculty show, takes on an air of fine art, but self-portrait-photo decals of his face on either speaker paired with graffiti script suggest an urban-art feel for this piece. As the child of a Puerto Rican mother and a Mexican father, Rodriguez’s artwork stems from his experience as an American with dual heritage. He has configured how he situates himself within those cultural ideas through his work. His upcoming Finch Lane Gallery show, tentatively titled (Un)Invited Collaborations with My Ancestors, will include 3D-printed copies of Mesoamerican objects and will continue his commentary on his cultural identity and associated issues.

Rodriguez discovered his passion for ceramics in his second year of college and taught at Houston’s Chávez High School in his early 20s. Teaching “mainly immigrant communities,” Rodriguez says, “prompted me to want to get to know my culture and where my dad was from. I saw all these people that looked like me, but I couldn’t to relate to them, and I wanted so bad to have a connection to that. That’s when I decided to go to Mexico, live there and spend time there and relearn the language. That was a really pivotal experience.”

After a decade of teaching at Chávez interspersed with travel to Mexico and an art fellowship in Japan in 2010, he got his MFA in Ceramics and Sculpture from Montana State University. From there, he was accepted for the U’s Morales Fellowship in 2016. (Un)Invited Collaborations with My Ancestors will be another advancement for Rodriguez during his last semester of this fellowship.

Rodriguez employs his penchant for hybridity to create awareness of and education on issues he relates to. When 45 revealed prototypes for walls last year, Rodriguez’s reaction was to create a triptych of bright-red molotov cocktails with a decal of a wall spread over the three of them. He views his sculptures as canvasses on which he can not only apply additional visuals but also to elicit irony.

“I like to mix a little bit of humor and jabs into the pieces, too,” Rodriguez says. His aforementioned boombox includes slurs and names that he’s been called both by people in the States and his cousins in Mexico. Moreover, since he grew up in the ’80s, he likes to include images related to hip-hop (graffiti script) and punk (an anarchy symbol on the garb of Huitzilopochtli, the Aztec god of war). 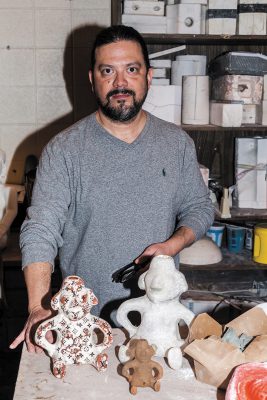 Horacio Rodriguez digitally scans Mesoamerican sculptures, resizes them for a 3D print that he uses for a cast, then creates his rendition on which he prints decals. Photo: Chris Gariety[/caption]

For (Un)Invited Collaborations with My Ancestors, Rodriguez will create copies of ancient clay sculptures, largely from Mexico. He has collected some small Mesoamerican sculptures, but upon grappling with their cost, he began to collaborate with the UMFA for access to their collection of Mesoamerican sculptures and for use of their 3D scanner. From there, he’s collaborated with the Marriot Library’s TJ Ferrill at the Digital Matters Department to manipulate the sizes for the objects he’ll print.

Rodriguez is aware of the different perspectives he’s invoking with this project. Pointing to a copy of a Mexican sculpture in his studio, he says, “I don’t have ‘permission,’ per se, to use these. There’s a lot of ethical considerations that I’m thinking about as I make this work … [but] I feel like I can bring some new life to this work. These pieces, for the most part, were buried in the museum’s permanent collection down in the basement, put away.” He also considers himself to be in collaboration with the original sculptors of the artifacts in his possession.

His process entails 3D scanning artifacts, proportioning the desired size of the print, printing the positive, creating a cast, casting what will be the final object, repeated firing then applying decals on them. Rodriguez is even contributing to the practices of his field—he says, “I’m trying to create this process where I can [digitally] create the mold and 3D print the mold,” which would speed up the process of creating multiple copies of artifacts.

The decals that Rodriguez will apply are graphics from clothing companies. According to him, this conceit responds to brands like Louis-Vuitton, Gucci and Zara—just some of “multiple offenders”—having appropriated patterns and textiles from poor indigenous-Mexican people without giving them credit nor compensation. Rodriguez hereby flips the switch of such appropriation by showing (and hopefully selling) items with the trademarks of these brands.

Though Rodriguez is still considering how he’ll present and arrange the show, his intention at the time of interviewing is to “address issues that are relevant and current today,” notably the detention of children at the border. “A lot of my students crossed the border, the students I taught at Chávez,” he says. “[A] daughter of this lady I was really close with died crossing, so these issues that are happening right now are really important to me, and they’re gonna find their way into this show.”

Shortly after this interview, Rodriguez traveled to Tulum and Chichen Itza to take photos with the intent  to include photos that support the environment of the show. His art looks to take on new meanings and nuances with each new project, each a reflection of our increasingly hybridic world. (Un)Invited Collaborations with my Ancestors opens on Friday, April 19, at Finch Lane Gallery, 6–9 p.m. For more information about the show, go to saltlakearts.org/program/finch-lane-galleries and to hellohoracio.com for more of Rodriguez’s work.