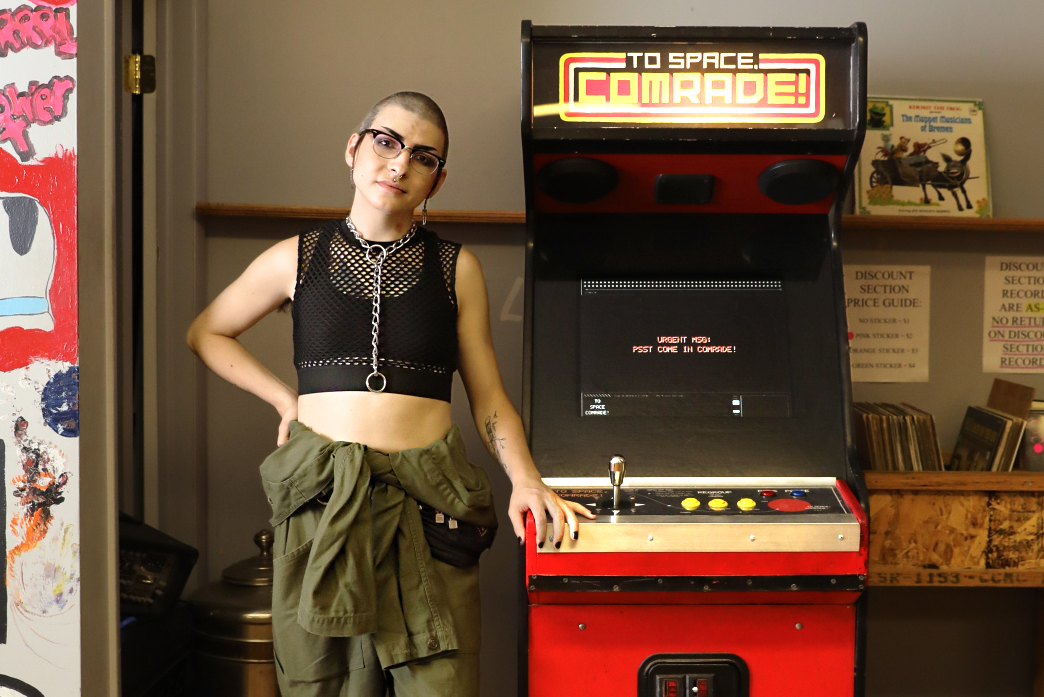 In an arduous journey through space, a group of queer-femme cosmonauts fight their way to Mars to establish a new colony. With a million humans in cryostasis, the human race is at risk of extinction, and only you can save it. As a cosmonaut on this mission, you and your comrades communicate together to dodge the space debris, comets and say “Give me your worst, galaxy”. As a cluster of ships, you work together to guide yourself through the unforgiving space landscape. This is the premise of To Space, Comrade!, an arcade game with a mission to encourage and establish progressive queer and communist themes in a ’80s 16-bit format. “I wanted to make the game as gay as possible and as femme-centric as possible.” says the captain and engineer, Josie Cordova, who built the game from scratch, teaching themselves how to do it along the way.

Before taking on the challenge of building an arcade, game Cordova faced creative obstacles that later led to their personal and artistic development. Cordova felt a creative block in tandem with their personal difficulty of coming out as trans. “It wasn’t until I came out that I could say ‘Yes, I did this and I put my heart into it,’” Cordova says. “It was then when I was able to actually start creating and building.” Cordova had the opportunity to express their identity when developing the game’s characters, “There are no dudes in this game—everyone is trans; everyone is queer; everyone is femme. If I’m going to make a game, I’m going to make it representative of the kind of shit I wish I would have seen as a kid. There was no trans representation when I was a kid,” Cordova says. “Little girls and non-boys have had to play a trillion games where they had to put themselves in the shoes of boys because everyone caters to boys by default.”

Cordova has always been drawn toward the mechanics of things—more specifically, building things such as drone synths and guitar pedals for their own music projects. From there, Cordova developed skills in coding, which eventually led to the budding of this now fully fleshed out arcade game. In the beginning stages of developing the game, Cordova used a method called cellular automata. The way they explain this method is using ants as an example: Ants have simple rules that govern their behavior—they eat, climb on stuff and carry things back to their colony. When using cellular automata, you put a collection of “ants” together in a system, and their behavior affects each other creating rich emergent behavior. “One of the things that has always been important to me as an artist is creating things that can create,” Cordova says. In the game, none of the outcomes are the same. The game is designed to behave at random and create unique outcomes that will never be repeated—Cordova built the system to turn out unpredictable output, making for a different experience every time.

From here, Cordova had an aesthetic in mind. “I wanted it to be an arcade game—it seemed more appealing to me than just building a game online,” Cordova says. “I wanted it to be a retro, ‘80s, Cold War aesthetic.” With that in mind, Cordova moved on to creating the soundtrack and sound effects for the game. The music uses data that the game keeps track of, such as how many people are alive or how many pods crashed. They all are then translated into musical content. What happens in the game generates the music that is playing—it will never sound the same twice. Cordova says, “It sounds better than anything that I could have planned to make then execute … I think that is so fucking cool.”

The cabinet was made by repurposing an old arcade game. With the help of Cordova’s arcade mentor (and local musician), David Payne, Cordova was able to add the finishing touches to the game. Payne’s role in the development of the game is crucial. “Had I not met Dave, this game would not be in a cabinet right now,” Cordova says. Cordova met Payne through playing shows with him for their project Future Coochie at Twilite Lounge, the same place Cordova would later debut the game. Payne assisted in areas like financing the game, finding the cabinet, moving the game from place to place and fabrication for the custom controls.

The night that Cordova unveiled To Space, Comrade! I was sitting in the back of Twilite Lounge. A typical night out at the bar developed into an experience that both inspired and struck the audience. Cordova talked about their journey through the development of the game, the learning, the sacrifice, the successes and the challenges. They then shared with the audience that their grandfather had passed away that same morning, and such determination and conviction to still debut their game illustrated just how important this accomplishment is to Cordova. To Space, Comrade! currently resides at Diabolical Records and is predicted to float around from place to place in the future. You can learn more about Cordova’s first arcade game on their website mothbuilt.squarespace.com/to-space-comrade, and you can support their patreon at patreon.com/josiedrew.