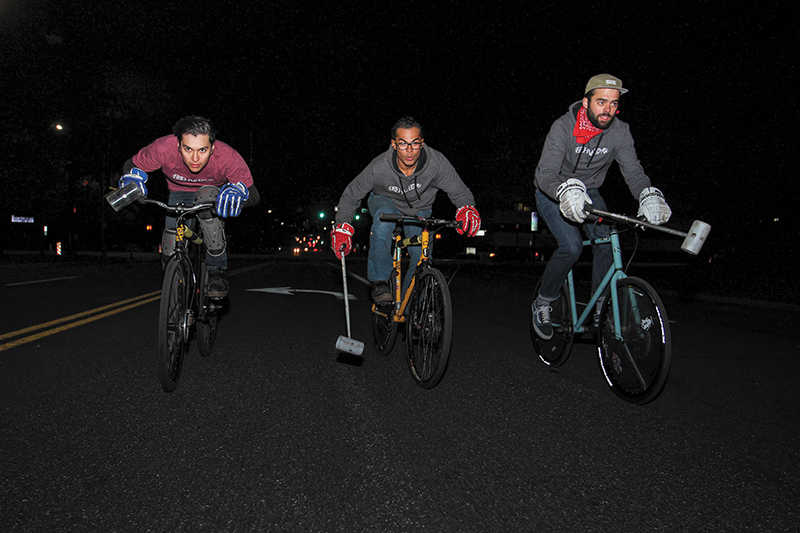 Deep in the honey pot of Salt Lake Valley street culture swarms Beehive Bike Polo, a cohesive community and mainstay of the Downtown bike scene. Three of its fiercest competitors, Jimmy Araneda, David Barthod and Gabe Mejia, make up the team Les Beehive Boys. The street-wise trio recently competed at the World Hardcourt Bike Polo Championship VII in New Zealand against the best of bike polo across the globe, and they are already setting their sights for the future.

SLUG: Qualifying for Worlds isn’t just a straight shot. What steps did you take to get there?
Araneda: We went to the Southwest Regional in Folsom, California, where we got fourth place, and the top five got to go to Nationals. After Southwest, we went to Nationals in Lexington, Kentucky. We took 14th out of 54, with the top 15 qualifying to go to Worlds.

SLUG: What was traveling to New Zealand to compete in such an amazing competition like?
Araneda: We did a touring bike trip around the island with our bikes loaded heavy. We arrived a day early to the camp and realized it was a group of all the bike polo people from the entire tournament. It got pretty wild. I want it on record that the first thing I did when we reached our air-BNB after camping was shower.
Barthod: The competition itself was a series of Swiss round robins and a single elimination at the end. You had to be in the top 16 to play in the final day, and we got 15th, so we were able to play every day of the competition. We really didn’t expect to get that far. We would have been happy atcoming home in 22nd or 25th place.

SLUG: Going to a competition for the first time can have some unexpected outcomes. Were there any pleasant surprises for Les Beehive Boys?
Barthod: The organization was very professional, with big sponsors, the best court you had ever been on … [and] real referees. There were three courts, and they were being recorded at all times for a live stream. We also got to meet people from all over the world like Japan, Hungary and the Czech Republic. The organization this time put pressure on the next organizer to make a good competition.
Mejia: The best thing about the tournament was that we got to play the former world champions. They were one of the best teams from the entire tournament—and really, to ever play the game. We didn’t get stomped, and it was a good gauge of how we can play.

SLUG: I saw that you did a few campaigns to help raise money for your competitions. Did they help get you where you needed to go?
Barthod: We sold shirts with logos online starting with Nationals and then for the Worlds, because tickets are really expensive. This is what bike polo is about, helping each other. We form a really small family.
Mejia: Before Worlds, we also did a bike party and race with a raffle and an alley cat called the Hive Cat. Everyone went to different bee-inspired locations and took a picture. Afterward, we had a party at Beer Hive in the basement. The fundraiser gave us another little push.

SLUG: What’s next on the horizon for the three of you and for Beehive Bike Polo?
Araneda: We need a court to practice on. Right now, we play in an underground parking garage that works for the winter. However, there are lots of grates in the ground, the walls are dangerous and it looks sketchy and is not welcoming to new people. Basically, all we need is permission to play somewhere three times a week and not get kicked out by the cops. If we could get one tennis court with a smooth surface, it would be amazing.

SLUG: Bike polo demands more than just training and practice. What other uses would the court be put to if you were able to get permission to play somewhere?
Mejia: We have been looking to do possible resurfacing and having a fundraiser. Right now, we are working with the Salt Lake City Bicycle Collective to do a youth bike polo program. We threw a tournament [Wasatch Open 2016] on April 8–10 with all the funds going toward the program … We want to have a space for the younger kids to practice as well.
Araneda: We want to build up the next generation of bike polo here. Think of the children.

Last month, Les Beehive Boys won the 16-team, multi-state Wasatch Open, and this May, the team will travel to Fresno, California, for their first tournament of the season. Going with them are Chingones, making this Beehive Bike Polo’s first tournament represented by two teams. For those Salt City bumblebees interested in joining the hive, Beehive Bike Polo provides an inclusive atmosphere and welcomes anyone to just show up and play.