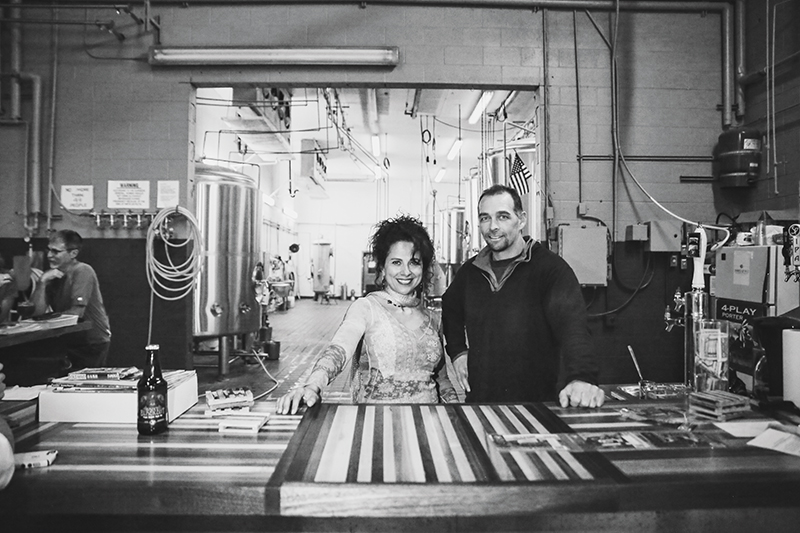 Step Out of the Sun and into Shades of Pale Brewing

Sequestered deep inside the old Hi-Grade Meats compound at 2160 S. West Temple is Shades of Pale Brewing. You know the place: Its sign had those two smiling cartoon pigs, eager to be turned into hotdogs. The pigs are gone, and now a Shades of Pale sign beckons. To get to the taproom, you must enter the glass door next to the blinking LED “open” sign. You will walk down a series of dim, fluorescent-lit corridors—an abandoned part of the meat-packing plant. Pallets block off empty rooms connected to the corridors, and arrows are affixed to the walls so you don’t get lost. You’ll start to feel like you’re in The Walking Dead, or that maybe you’re about to get turned into a hotdog.

When you open the final steel door and enter a large warehouse, you’ll know that it’s safe. The smell of bubbling wort will lead you in toward the brewhouse at the end of the room. As you approach the bar, built right in front of the open brewhouse, and climb atop a barstool—made from reassembled pallets—a man in coveralls stops hosing down the floor to pour you a pint of Publican Pale Ale. He might be Trent Fargher, owner and operator, or he could be Zack England, Head Brewer. The only light in the warehouse comes glinting off the brewhouse’s stainless steel fermenters in front of you. The brewer will resume his work, you’ll sip your beer, and you’ll think to yourself, maybe out loud, “Where the hell am I?”

Sitting at this bar, I spoke with Alexandria Ortiz de Fargher—the Head of Marketing and Merchandising at Shades of Pale. Alexandria and her husband started Shades of Pale in Park City in 2011, in a small warehouse that they describe as a glorified garage. It was the typical small-brewery startup story: An experienced homebrewer decides to make their passion a profession, starts small, and soon faces unexpected demand. “We got our license in 2010, but we were not officially open to the public” Ortiz says. “We were doing recipe development, and then we started getting invited to festivals, and people were excited about the beer.” Before long, they had to upgrade from their tiny Sabco pilot system to a bigger brewing setup. Further expansion became necessary with increased demand for their line of five bottled, session-strength beers—Publican Pale Ale, Jack Wagon Wheat, 4-Play Porter, Misdirected IPA and Ready to Fly Amber Ale. So, in 2014, they moved the whole operation to South Salt Lake.

The taproom opened last November, but not without setbacks from the city. “The license they wanted to give us was a restaurant license,” says Ortiz. With this type of license, 70 percent of their revenue would have to come from food sales. This obviously made no sense, since Shades of Pale is a brewing facility and is in no way equipped for food preparation, so they fought back. Ortiz says that they mobilized their supporters to participate in letter-writing campaigns, attended city council meetings, and invited the reportedly all-LDS South Salt Lake City Council members to tour the facility in an effort to convince them to change legislation to accommodate their taproom. It worked. “This is an area that’s underserved and undergoing development,” Ortiz says. “The city does want to bring prosperity to the area.”

With the opening of the taproom, Shades of Pale has become sort of a community hub in the otherwise rather desolate Commonwealth District. For workers in the area, it’s the prime spot to grab a pint after quitting time, and it’s the place to try the freshest, newest developments in Shades of Pale’s beer lineup. In addition to their five roster beers, their taps might offer a brand-new stout or Forte, their new white IPA—it’s always changing. Inside their refrigerated keg and bottled-beer storage room is a makeshift bottle shop. You might be able to find the limited-run Saint Blackout Belgian Tripel, and you can buy full-strength versions of their session beers, which they distribute to Wyoming. To appease the DABC, their labels are covered up with their “Beer X” labels—the catch-all label for their one-off, experimental line of beers.  And, since Shades of Pale would rather give patrons the option of eating food at the bar rather than forcing them to, you can get food delivered from the adjacent Pat’s Barbecue or Este Deli if you get hungry.

This year holds a lot of promise for Shades of Pale. They are opening a 3,000-square-foot event center, and they’re planning to host Gallery Stroll events, among others. For those who don’t want to spend a nice summer afternoon drinking beer in a dark warehouse, there will be a 6,800-square-foot beer garden in the outdoor space between the facility’s buildings. They are in the process of expanding their brewing capacity, increasing distribution and constantly creating new beers. Currently, they’re aging a pale ale in Beehive Distilling gin barrels, and a sour beer program is in the works. Shades of Pale is a beer destination, and they are open to the public seven days a week. Check shadesofpale.com for their current hours since they’re continually tweaking their hours, depending on customer flow. The taproom is still in its infancy, after all.