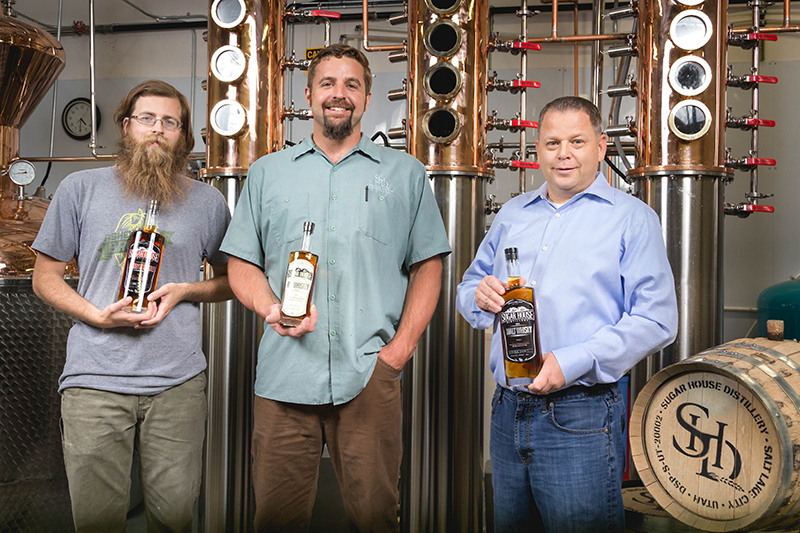 Locally owned and operated, Sugar House Distillery has been working their mashes off to create true craft spirits in Utah. Over the past year, this growing operation has expanded in size and pride. It has proven to be an exhilarating one for the distillery, with some exciting advancements in production. And with another year coming to a close, Sugar House Distillery Owner James Fowler and Head Distiller Eric Robinson are setting roots into the community deeper than ever.

After a year of waiting and a month of installing, Sugar House Distillery is now the proud owner of a sparkling new still. Robinson proudly says, “It’s bigger. It’s shinier. It’s challenging. It’ll improve the flavor on the product because it’s more copper on the still.” Not to mention that the 28-plate still can produce up to 500 gallons in a six-hour shift. They began producing their limited-edition rye whiskey in April of 2015. They now hope to take it to a full-time production. Fowler says, “It was test-batched just to see, once we received the new still, what kind of mash bill and yeast we would use just to see if we really liked it. And it was on par.” They are currently working on another 30-gallon barrel of the whiskey, which they hope to have ready in the upcoming winter months.

Sugar House Distillery attended this year’s spirit competition put on by the American Distilling Institute, in which they were judged by a panel from various distilleries. They walked away with several prestigious awards, including a Bronze Medal for their Sugar House Silver Rum and a Gold Medal and Best of Class Medal for their Bourbon. Fowler says that “for a Utah distillery to show up, we were pretty happy with what we came home with.”

Their equipment may have gotten an upgrade, but their recipe has stayed consistently advanced. All ingredients are sourced locally and recipes are free of any artificial coloring, flavors or additives. The grains come from Idaho Falls (home to some of the best barley in the country), and all their yeast propagates onsite. Some of their more unorthodox decisions in distilling have fostered a bolder, more complex flavor. “We’re using some grains that other people aren’t,” Robinson says. “Traditionally, scotch or single–American Malt Whisky are just using two, while we use three malted grains to bring in different flavors.” Fowler adds that their malt whiskey “isn’t as sweet as some and not as dry as a lot of them,” he says. “We’ve done a good job at pegging it right in the middle.”

Along with about 25 other distilleries in the nation, Fowler and Robinson are working to get American Malt Whisky recognized by the Alcohol and Tobacco Tax and Trade Bureau (TTB) as an official category of its own. With craft distilling steadily rising in popularity along with the number of distilleries, Fowler explains that the federal government is struggling to keep up and is clinging to outdated regulations. American laws require a spirit to age in a new oak barrel, as opposed to European law, which allows for used barrels—creating an entirely different flavor profile. “That malt whisky is a neat whisky,” Fowler says. “We make that whisky in the American way, but we use the exact same grains as you would use in a Scotch or an Irish whisky.” With so many craft distilleries experimenting with nontraditional methods, Robinson and Fowler hope that their honest approach will allow customers to know exactly what they’re getting just by looking at the bottle.

Sugar House Distillery is crafting high-quality products, created start to finish in house. Robinson says, “Everything is propagated, mashed, distilled, barreled, blended, bottled all right here.” It’s a unique process, to say the least, since many distilleries do not create their product onsite, but buy it on the open market and repackage it. To craftsmen like Robinson and Fowler, this practice is one they’re hoping to eradicate. Both of them agree that it’s important to work closely with other businesses in their community. Fowler says, “Being craft, we’re supporting local farmers. Our farmer that we use down in Central Utah has discovered a whole new industry and is now reaching out to other distilleries, selling so much more grain locally. It’s creating jobs, and it starts to help the local community when it starts bringing more money into the local economy.” He refers to the operation as “grain to glass,” an idea he’s hopeful will one day be practiced nationwide.

Bringing new and innovative techniques to the industry, Sugar House Distillery hopes to continue providing all-natural spirits in-house and encouraging other distilleries to do the same. “We need more people who are distilling than just repackaging,” says Fowler. “There are not a lot of benefits to repackaging a product. It doesn’t create jobs, it doesn’t do a lot for our economy, and the quality isn’t there.” And with some new accolades under their belt, a brand-spanking-new still and some uniquely delicious whiskey, Sugar House Distillery has proven in just a year’s time that they really know how to raise our spirits.