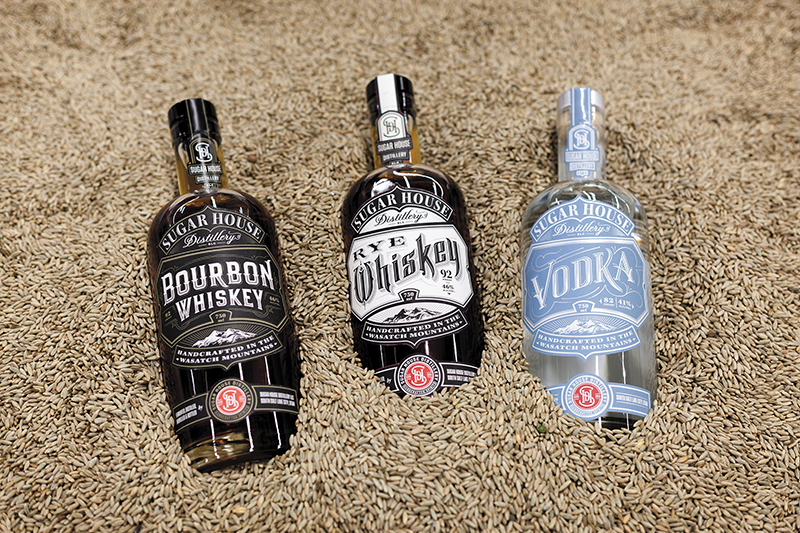 For four years, Sugar House Distillery has been steadily making an impact on Utah liquor, focusing on the quality of their product, honing their craft and being one of the few truly “grain to glass” distilleries in the area. Sugar House Distillery's passion for distilling their own whiskey, vodka and rum—while sourcing most of their products in-state—has quickly set them apart as one of the premier distilleries, not only just in Utah but also nationally, having picked up accolades from the American Distilling Institute last year for their Bourbon Whiskey and Silver Rum. Despite the successes in flavor and quality, owner James Fowler and Master Distiller Eric Robinson felt as though the bottles’ labels had always been lackluster. “What we cared about to begin with was quality of the product,” says Fowler. “We wanted a kick-ass product. I can't say that we didn't care about the label. Nobody's loved it. None of us have really hated it; it's just kind of been like, ‘It is what it is.’”

The former design proved to be challenging for some bars to stock due to the unusually tall, top-heavy bottles, and they featured plain labels with a mountain logo. New logos on more standardized bottles, created by Vancouver-based designer Ben Didier, are already rolling out for Sugar House Distillery's Rye Whiskey, Whiskey Bourbon and Vodka bottles. They feature intricate typography that evokes an old-fashioned sensibility. Each logo is unique and coheres with the set, even retaining an element of the old mountain logo branding. The font is eye-catching and stylish, without any extra frills or gimmicks, mirroring what Sugar House Distillery represents locally—spirits that are sourced, distilled and bottled locally for a better taste. “You see it before you drink it,” says Robinson. “People want beautiful things—it's crazy. So, to get a good foundation with an amazing product and then to have packaging that goes along with it is huge.” Eventually, Fowler wants to convert all of his spirits to the new logo and bottle, incorporating Sugar House Distillery's rums and Malt Whisky next. “I don't want that old label or bottle on anything anymore,” he says.

The re-branding also signifies Sugar House Distillery's growth over the last few years, “[The re-branding] frees up time for us to focus on new products and to grow,” says Fowler. “Eric and I go back and forth everyday on new products we want to do, and so I think that [branding] isn't the concern that is has been.” One of the new things that Sugar House Distillery is working on is a series that incorporates the use of barrels that have been used by local breweries. The idea is to bring out subtle nuances of flavor from those brews into their bourbon through storing the bourbon in these barrels. Specifically, Sugar House Distillery plans on releasing a limited series of bourbon that has been finished, then stored in a Uinta Brewery Cockeyed Cooper barrel for eight months to be released around Thanksgiving. “It brought out a lot of that Cockeyed Cooper barley wine flavor out, the sweetness, the flavor and the hops,” says Robinson. “It’s just building complexity in the finished product.” This series, while yet to be named, will feature Epic Brewing's Smoking Oak for a release in the springtime as well as a Red Rock Brewery addition, to be announced.

Sugar House Distillery's focus on bringing their customers quality products goes beyond just creating everything onsite; they also have their own mill and source their grains locally in order to use the freshest products. For Fowler and Robinson, the effect is evident in the richness of their products. “It's got a shelf life; it’s like any food product,” says Robinson. “We'd rather get our whole grain and mill it ourselves, and we'd rather get it the day before we're doing our mash so there's no sitting around where it's losing flavor.” For Fowler, the difference in taste is apparent when something hasn't been over-produced. “When we have a fresh product, it’s going to be so much better. We're going to get better yields, we're going to get better flavor,” he says. For the distillery, creating a relationship with farmers has been a crucial step in securing the best grains, and one that Fowler hopes is symbiotic. “The movement of keeping things local is so important on an economical footprint,” he says. “We've reached out to some farmers where I've really felt like we've made a change in their economic life, and now they support other local people, and I just think that is so huge. At the end of the day, I want the quality done right. I want a high quality product.”