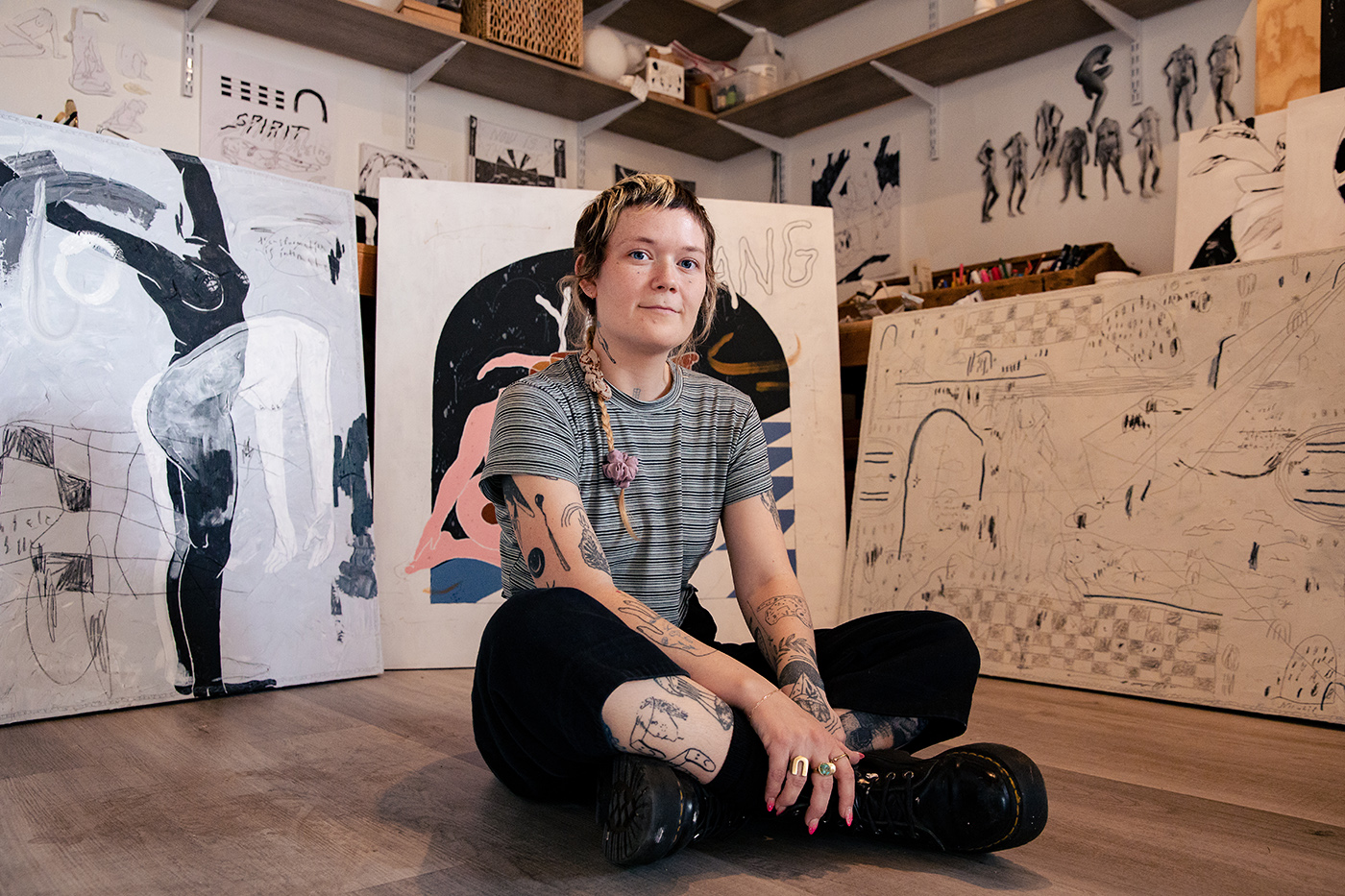 Last month, my mother got her first tattoo. She got one before me, something I never saw coming—two small rings conjoined at an end like a Venn diagram etched into her wrist. To her, it’s a reminder of the connection between body and mind, of the subtle ways the two feel interminably entwined. It’s a simple but effective piece that has sent me down the rabbit hole thinking about how we conceive of the body itself. The work of Jill Whit, a tattoo and visual artist (and musician) from downtown SLC, embraces our fleshy vessels as abstract and messy things.

“My art is an exploration of the body, of getting to know yourself through solitude,” she says. “Gaining a connection to your body and your spirit; physical and emotional movement; trying to be ever-accepting, shifting and living. It’s personal, but also I feel like everyone can relate because everyone has a connection to their own body.” Though the human body dominates her art, the theme of solitude and connection persists through the use of lines.

“My art is an exploration of the body, of getting to know yourself through solitude.”

Whit grew up a creative child and knew early on that artmaking would be a fulcrum of her life. “I was always making something,” she says. “I [have] played a little bit of guitar since I was little. I was always writing and making art, making videos, pretty much anything creative.” As an adult it all continued: She studied art and printmaking at school, jumping around Utah colleges before ending up at the University of Utah. She’s releasing her first album through Orindal Records this spring, and while she dabbles in printmaking still, Whit’s focus is on tattooing. Her space at Church & State downtown opened back up last year around September. Though the work has been much less social, 2020 has been a lesson in embracing solitude with intentionality. She says, “Any sort of creative thing is a meditative thing to me. I feel like this last year, for me, learning to really spend time by myself and be off social media, to be finding things I would have never normally done but felt much more fulfilling to do was definitely beneficial in connecting to myself and my physical body.”

Human bodies are nearly omnipresent in Whit’s visual work, from tattoos to prints. Many of Whit’s pieces feature headless forms that splay out and intersect with each other, puzzles of flesh that balance each other even as they entangle. The linework throughout her portfolio connects and disconnects, spirals inward or casts shadows through itself. The clean, clear lines are somewhat at odds with the way objects lovingly interpolate, which was not always the case. “I used to be like, ‘I want everything to be really flat, perfect and straight.’ I was painting with a lot of acrylics and still doing figures, but they weren’t messy. They were straightforward. Now I’m into abstract, messy art. I like figuring out how my style can play into that.”

“Learning to really spend time by myself and be off social media, to be finding things I would have never normally done but felt much more fulfilling to do was definitely beneficial in connecting to myself and my physical body.”

That messiness found an unexpected home when Whit studied printmaking. The meticulousness of the craft is what initially attracted her: “I really liked the idea that the process was more tedious,” Whit says. “You could have this idea of what you were trying to accomplish, but then when you actually printed it was always different than I had imagined and usually better than I had imagined. That process was always fun to me.” This dovetails with how the body is depicted in Whit’s work. Bodies are messy things that grow differently than we might expect. The acceptance of the form, as well as the body’s changing capability over time, became more potent to Whit in 2020.

“[The year] pushed me into this mindset of stripping down. How do I want to spend my time? Am I filling my brain up with things that are stimulating? Creatively it’s gone in waves. I had periods of creativity and periods of block,” she says. Whit’s upcoming album, to be released fully in May with a single in April, is something of a self-help album, as the label describes it. Whit says, “A lot of it is the idea of balancing taking the day off, doing nothing, being bored, and then the opposite—building a routine, finding some sort of structure. During quarantine that’s been the biggest struggle for me. Do I decide to get up and do something productive? Or do I just decide to do absolutely nothing—because I can do absolutely nothing!”

You can do absolutely nothing. I thought of this while looking at one of Whit’s pieces. It shows a body, lying supine on a cloud—its chest, shoulders and neck consumed by the static of a bulky CRT television. I imagine it broadcasting the world right into the brain. The upper ankle of the body is severed, but the foot acts as though it is still connected. In the bottom right, handwritten text reads, “a dark light / creating our / own language.” This simultaneously connected and disconnected, dismembered and scarred body feels tired and full of life, and all my brain can muster to say is “same.”

You can view more of Jill Whit’s visual work at jillwhitart.com. More information on her tattoo work, including availability for custom and flash designs, are also available, and don’t forget to keep an ear out for her album dropping this May through Orindal Records at orindal.limitedrun.com.