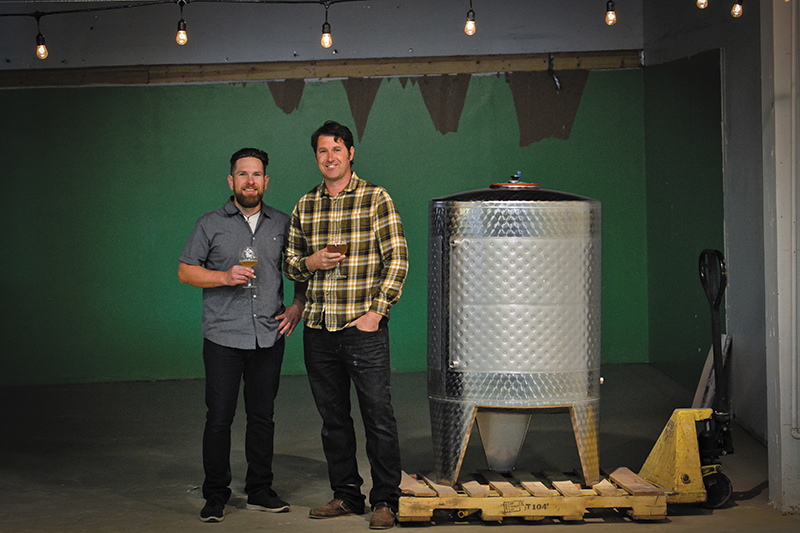 The next time you find yourself shopping for beer, take a look around: You may notice that for the most part, your selections are generally variations of English ales and European lagers. Rarely in our market do you come across sour “wild” beers, but this is not to say that they aren’t out there—you just have to do a little more hunting for them. Wild ales are often seasonal offerings and disappear within hours of hitting the shelves. It’s a testament to the Utah beer drinker’s evolving palate and thirst for something new. Toasted Barrel Brewery Co-owners Sage Dawson and Lynn Litchfield would like to make wild beers the norm in their Salt Lake City brewery, placing them above all others.

In 2000, Dawson relocated to SLC from Portland, Oregon. He’d found his beer options limited and turned to home-brewing to satisfy his craft beer cravings. “It was the only way keep my sanity,” Dawson says. Armed with an education in biology and microbiology, Dawson had a unique way of viewing his home brews. “My studies shined a light on the yeast part of brewing,” says Dawson. “I felt that the essence and flavors of the yeast were the primary drivers of what I found to make beers taste exceptional—especially sour beers.” Litchfield agrees: “We’d like the yeast to be the star of our beers, and sours are the perfect showcase for yeast-driven beers,” he says.

As to what about wild yeast makes it so important, “There’s a complexity of flavor that comes from these less-tame strains,” Dawson says. “We’d like to exploit these and create varying combinations that we hope the consumers will be drawn to.” Litchfield adds that they’ll acquire these bugs from standard yeast labs and hope to collect them from different areas of Utah. Dawson says, “We’re proud of where we live and want to utilize the natural yeast from our environment, and we want to make beer that’s sourced from our air.” One of the ways they plan on doing this is through the use of a coolship, an open-air vat that draws upon the natural yeast in the air to ferment beer. “We’re going to fabricate a mobile container on a flatbed trailer,” Dawson says. “Basically, we’ll do our brewday, get our hot wort [unfermented beer] into the container, drive out to the West Desert or up to the high Uintas, then open up the wort to Utah’s beauty and let environment ferment the beer.” After a day or so, the boys will bring the beer back to the brewery and put it into proper fermenters and let the bugs do their job without the help of any other yeast. “It will take a while, probably a year to produce,” says Litchfield, “but we think the end results will be an incredible beer-drinking experience.” Dawson also notes that hitting different times of year in the same spots will cause “variations of different bugs as well.”

These are some serious “old-world” techniques. As far as whether Salt Lake’s beer market is mature enough to appreciate having wild beers available on a daily basis, Dawson says, “We don’t want people to be shocked or offended by the tartness, so education and information will be big priorities for us.” Litchfield notes that they ask for three sips: “The first is overwhelming and shocking,” he says. “The second sip is akin to getting your balance. The third sip gives you the opportunity to explore the flavors.” Dawson chimes in, saying, “The flavors can be very appealing to those with wine sensibilities.”

Since these are time-intensive beers and the brewery is still in the building phase, they need beer to open the doors with. “We’re going to start off with some sour beers that we can get out to the consumer quickly,” Dawson says. “Berliner Weisses, goses, tart saisons. These are beers that can be soured quickly and be ready on opening day.” Opening day looks to be happening later this summer. When you do show up for a pint, you’ll find a tasting room with taps and a cold case full of high-volume bottles to take home with you. “You’ll be able to come in and try a small amount of each of our bottled beers so you can get an idea of what works best for you,” Dawson says. “We’d rather go this route, rather than have you spend a lot of money on beer that may not work for you. Plus, it gives us an opportunity to educate our customers on what they’re drinking.”

Toasted Barrel will be located in the Marmalade neighborhood of Salt Lake City with Red Rock Brewing and Mountain West Cider as neighbors. Dawson and Litchfield are hoping that locals and visitors alike will appreciate the time that goes into crafting their unique Utah beers. “In the coming year, we hope to have 80 percent of our beers barrel-aged, including whiskey-barrel-aged ales,” says Dawson. “We believe there’s an untapped market [with regard] to sour beers. Yeah, there are a few seasonal offerings that come around every so often, but we’d like to have wild beers available every day for people. If you’re not a fan of regular beers, we think you might like these.”