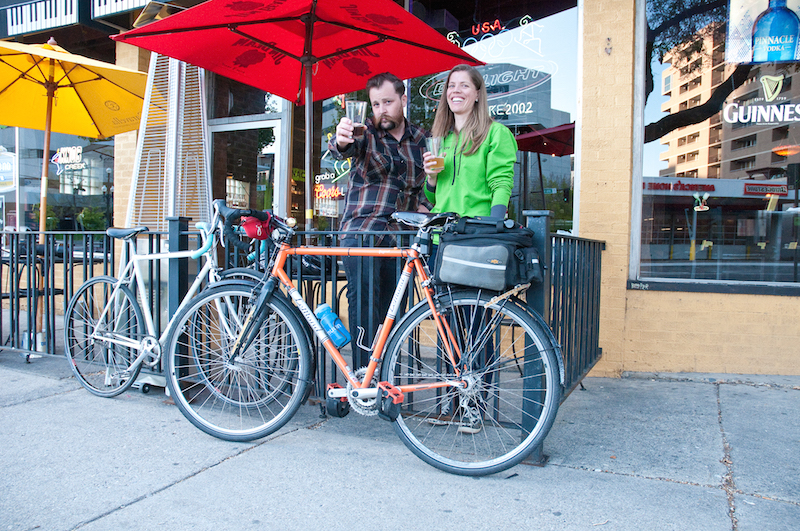 This weekend on April 30, the annual Tour de Brewtah will bring together two of Utah’s biggest communities, incorporating great beer and cycling into one of the biggest and most anticipated bicycle events of the year. This year’s Tour de Brewtah will raise funds to benefit Splore, whose mission is to reveal the “dignity in risk-taking,” through adaptive recreation. Splore provides outdoor adventures for individuals of all abilities and believes in encouraging others to break the belief that someone with a disability should be sheltered from life experiences. Brandon Smith and Janine Donald enjoy some brews while reflecting on the history and growth of Tour de Brewtah. Photo: Scott Frederick[/caption]

I had the opportunity to grab a few beers with Janine Donald and Brandon Smith to talk about the roots and creation of Tour de Brewtah, as well as Tour de Brewtah’s involvement with Splore. Splore started in the ’70s when founder Martha Ham wanted to take people with disabilities on river rafting trips in Moab. Donald explains that when Ham first wanted to go there, people thought it would be dangerous and that she was crazy for wanting to try. When Ham was ultimately able to complete the first river-rafting trip, everyone loved it, and soon after, they were able to start taking more people who might otherwise feel that such activities were inaccessible to them. Now, Splore has a variety of winter sports—stand-up paddle boarding, canoeing and outdoor rock climbing—in addition to the river rafting.

“What we really see impact people’s lives is that for many people—especially those who are born with a disability—you’ve grown up with this idea that there’s only so much that life and the world can offer,” says Donald. “It’s a matter of education and getting people to try it, and when they try, it’s amazing to watch their awareness open up … challenging themselves in a world suddenly filled with new opportunities.” Splore works with all ages, from five year-olds to 85 year-olds with everything from developmental disabilities, mental illness, learning disabilities, to MS and spinal cord injuries. “I see us as a catalyst for people who want to do more with their lives, showing more of the possibilities that life has for them—and that having a disability doesn’t mean that they have to live a sheltered life,” Donald says. Registrants of this year’s Tour de Brewtah will directly help to raise funds for a this local nonprofit, maintaining the localized momentum of the event.

I asked Donald about the history of Tour de Brewtah and how it has evolved into such an anticipated event. As it turns out, a little inspiration from Oregon and a small group of friends started it all. “It’s crazy to look back and see how something that was just a fun idea has grown into an event of this size,” says Donald. “We really just wanted to have an excuse for us to all get together and have a few drinks around the city. It was all about having fun and exploring the city.” Having known about Oregon’s brewery tour, Tour de Lab, five friends wanted to recreate and adapt a pub-crawl here in Salt Lake. Six years later, Tour de Brewtah now features 14 breweries, four host bars and nearly 1000 riders each year. Breweries such as Shades of Pale, Proper Brewing Co., Squatters, 2 Row Brewing and Desert Edge have all gathered in to participate in this diverse gathering of cyclists. The size of the event provides its own tests—fortunately, that’s only as a direct result of its growth and the enthusiasm of Salt Lake’s cycling community. “Coordinating with all those entities and making sure everyone is on the same page can be a challenge,” Donald says, with “all the standard run-ins of running any event with such a large attendance.” Smith says the payoff vastly outweighs any stresses or pitfalls that the preparation for Tour de Brewtah could ever present. “The rewarding part of [Tour de Brewtah] is a combination of multiple communities in Salt Lake. You’ve got the brewing community, the cycling community and Salt Lake in general. Even if you’re not a cyclist, this is a great opportunity to come and meet those people who are really into it, and this is where you’re going to meet your brewers and other cyclists. It’s a bonding experience … and cycling is the best way to see our city.”

Combining Salt Lake’s craft beer and cycling communities has created a crossover that Utah has fully embraced. Now, there are dozens of small weekly and monthly gatherings for cyclists to barhop or simply get together to ride, but Tour de Brewtah provides an all-day event that ends in an afterparty for participants to mingle and enjoy the city’s finest craft beers together—a much-deserved reward, regardless of which of the four routes riders choose. All the routes start and end at the Gallivan Center. The longest route, EX-Splorer, is 36 miles, and the shortest of the four routes is the 4.5-mile-long Free Spirit. The variety of routes allows cyclists of all experience levels to participate. Smith puts it perfectly when he says, “Every aspect of Tour de Brewtah has exploded.” It’s not hard to figure out why this well-organized event is one that is so looked forward to by the brewing and cycling community.

Participants are also welcome to volunteer before and after the tour, and anyone wishing to get a few of the remaining spots can register online. Tour de Brewtah is this Saturday, April 30. The first route pushes off at 10:30 a.m.