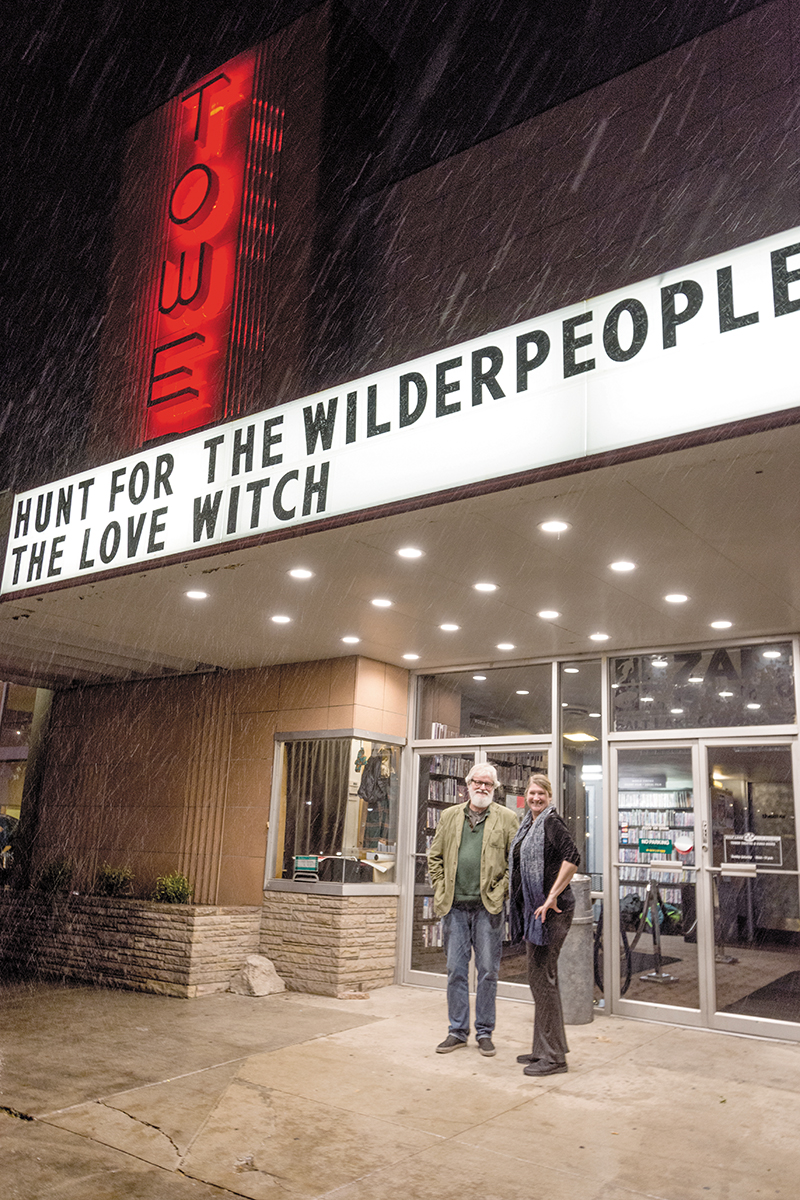 The Tower Theatre: Keeping it Indie Since 1928

My first experience with the Tower Theatre was when a friend and I went to see a midnight showing of The Exorcist. When I heard the audience laugh as Regan verbally abuses Father Karras in her bedroom, I knew that I had discovered something special, like a kind of cinematic gateway drug. It’s a sentiment that I share with Kevin Hanson, who has chaired the Department of Film and Media Arts at the University of Utah since 2010, with whom I was able to swap some cherished cinematic experiences at the Tower. “My first memory of the Tower was being taken there by my older brother when it was a much dingier place than it is now,” Hanson says. “He took me to see an Ingmar Bergman film that was already 25 or 30 years old, but it was certainly new to me.” For many local movie buffs, watching a show at the Tower represents a filmic coming of age, and it’s a tradition that only enriches the downtown community.

The Tower opened in 1928, and for the first 30 years of its operation, it looked more like a medieval fortress than it did a movie theater. “The structure used to have two towers, hence the name,” Hanson says. “They were crenellated at the top as though tiny archers were going to defend the theater.” Throughout its lifetime, the Tower has always been a hub for independent cinema in Salt Lake, which made it a valuable resource for the Salt Lake Film Society, who began managing the Tower in the early 2000s.

It also remains one of the few locales in Salt Lake where people can go and have a shared theatrical experience that they’re not going to get anywhere else. “It’s one of the places where young people are first introduced to cult cinema, and then to pieces of more interesting cinema,” Hanson says. “It has a subversive educational effect—it seduces people into thinking about film in a different way.” I know I’m not the only one whose experience seeing a film like The Exorcist years after its release opened the door for experimenting with demented gems like The Greasy Strangler or Antibirth—both of which were playing just a few months ago.

In addition to showing films that don’t often make it to the megaplexes and participating in screenings for the Sundance Film Festival, the Tower also boasts one of the largest publicly accessible video archives in the state. It’s something that Sarah Sinwell, assistant professor in the U of  U’s Film and Media Arts Department and governing board member of the Salt Lake Film Society, encourages her students to take advantage of. “A lot of people don’t talk about the significance of the archive that has over 11,000 movies,” she says. It’s also a safe place to let your inner movie geek out of its box. “The staff is always knowledgeable, and they’re invested in independent cinema themselves,” Sinwell says. “The experience that you get when you enter that space is really different than that of the multiplex.”

Metropolitan areas that still invest in art-house cinema are dwindling. Salt Lake City still carries the torch, largely thanks to the Salt Lake Film Society. “There’s a real danger that these theaters could go away, and they have in some towns,” Hanson says. “We’re really lucky to have the kind of choice that we do.” Many of these theaters close due to distribution deals that release new films via on-demand streaming methods at the same time that these films are scheduled to hit theaters. “Art-house cinemas are responding to that by creating experiences that you can’t get at home,” Sinwell says. “I’ve been to millions of movies in my lifetime, and I’ve never had an experience like Sing with Maria, for example. Not only did the Tower show The Sound of Music, but they had all the lyrics on screen so you could sing along. It was an interactive cinematic experience that you can’t replicate at home.”

Because of the Tower’s community-oriented approach to film, it has become an essential part of Salt Lake’s 9th and 9th district. “I think the Tower is particularly important because of the growing community around Harvey Milk Blvd.,” Sinwell says. “A lot of people refer to it as the hub of the 9th and 9th area.” The theater’s eclectic rotation of films combined with the various locally owned stores and restaurants has made the 9th and 9th area one of Salt Lake’s most culturally unique destinations.

Over the years of its operation, the Tower has come to represent a rare alchemy of economic and cultural value that helps keep its patrons coming back, but there is also something unspoken about the community that has come to revere the Tower. “A lot of theaters have come and gone, but the Tower is one of the oldest and strongest symbols of our interest in independent cinema, and I think that’s where the emotional attachment as a landmark comes from,” Hanson says. Hearkening back to its original form as a fortress, the Tower continues to remain a bulwark of unconventional creativity in a sea of artistic apathy and mediocrity. As one of the Sundance Film Festival’s official screening locations, now is a great time to go to the movies.