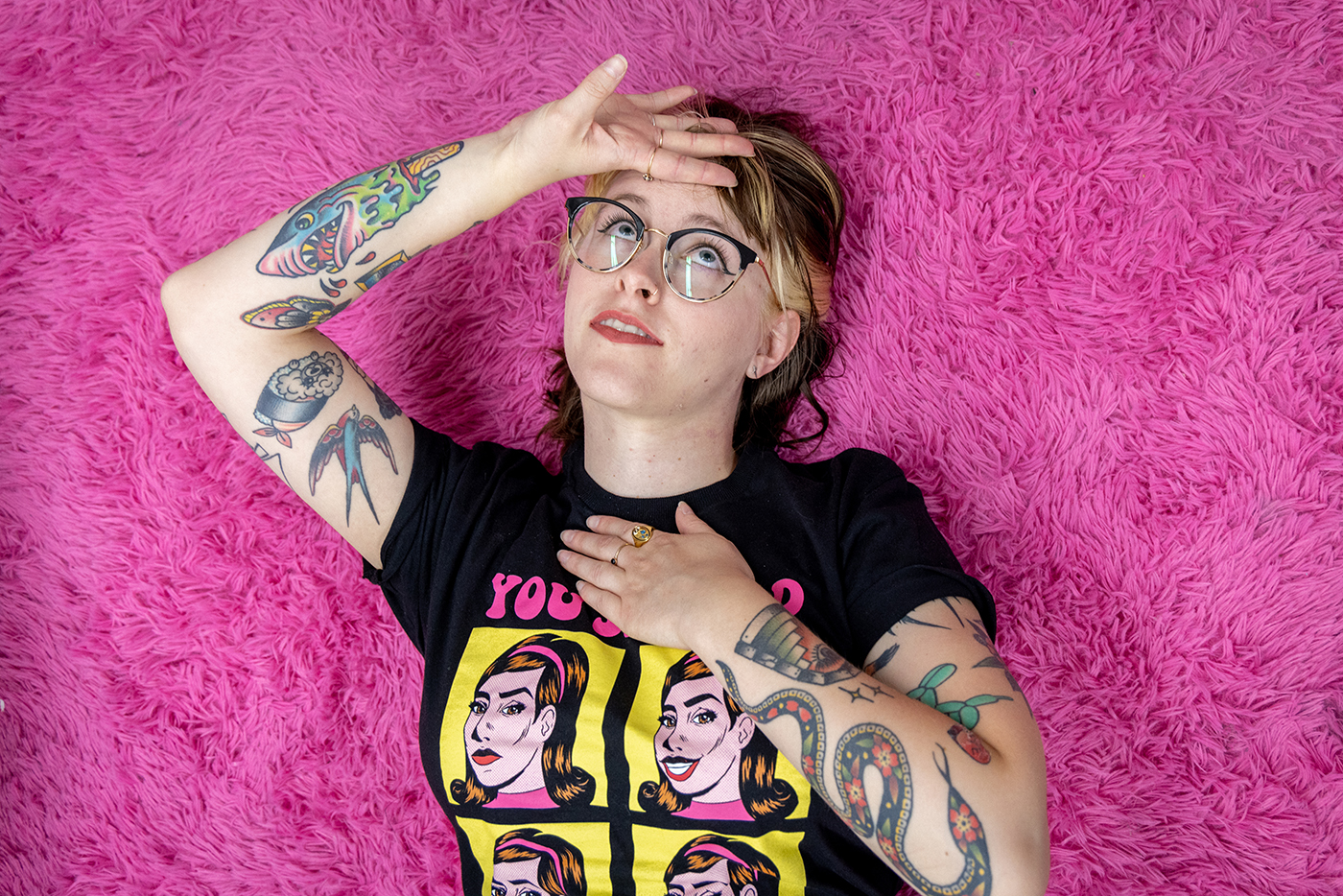 Tragic With A Twist: Katie Mansfield of Tragic Girls

At first glance, you might think a graphic T-shirt displaying a retro comic babe with swinging chainsaw tits is nothing more than it seems: A kick-ass design and one hell of a fashion statement. But like all works from art and apparel brand Tragic Girls, there is deeper meaning in the details. Each piece in Tragic Girls’ art and clothing collection blends dark humor with a nostalgic style and just enough satire to make tongue-in-cheek commentary on social issues.

Tragic Girls was founded in 2017 by Katie Mansfield. A daughter of two creative parents, Mansfield was surrounded by art as early as she can remember. “I remember always drawing during school, after school, during work, after work, basically all the time—especially when I was supposed to be doing something else,” Mansfield says. She named her first drawing “Faces with Legs on There,” a very on-the-nose, poetic description of a preschooler’s smiley face with legs.

From there, Mansfield’s artistic endeavors progressed from stick figures to music. “Originally, I did want to go into music. I’ve been in several bands over the years,” she says. Mansfield felt a particular affinity for jazz and began studying that style in her early college years. However, the affair with jazz was short and sweet, and in the end, Mansfield says it was graphic art that won her heart.

“I remember always drawing during school, after school, during work, after work, basically all the time.”

After getting a degree in film and media arts, Mansfield worked as a graphic designer for a local company. The position was a respectable entry into the industry, but like most corporate-employed creatives, Mansfield felt stifled by the work. To feed her inner artist, she began pursuing illustration on the side. However, balancing a full-time career and a passion project was no easy task, and Mansfield wasn’t ready to make a bet on her creative endeavors.

Instead, the bet was made for her. By a stroke of bad luck, Mansfield was laid off from her job, although she reflects on the moment as the real jumping-off point in her career. “When I lost my job, I felt like it was my chance to really try to make art work,” she says. “It was terrifying, but I knew I would regret it if I didn’t at least try.” Mansfield threw everything she had into creating her art and brand, visiting conventions and traveling to hone her style. Eventually, all that energy and determination turned into what is now Tragic Girls.

Tragic Girls’ signature vintage comic style is instantly recognizable now, but flash back a few years and it looked a bit different. “I’ve always loved comic book art and I think I’ve always kind of known I wanted my style to look like that, but I didn’t always have the technical abilities to pull it off,” says Mansfield. Her early comics drew inspiration from Japanese graphic novels and included manga-esque characters. As Mansfield developed her skills, her drawings began to reflect film noir techniques. “My style turned into more black-and-white, cartoon-y comic book illustrations, and I only used black and red ink on white paper.” Working her way toward what would become the Tragic Girls brand, Mansfield then switched over to digital illustration. She describes the adoption of a digital medium as a turning point in her creative journey. “I was able to achieve that retro comic book effect a lot easier,” she says. “I’m [the] closest to the style I want [that] I have ever been.”

“When I lost my job, I felt like it was my chance to really try to make art work.”

Mansfield’s creative journey and dedication to her brand led to what Tragic Girls is today—retro cool with pops of color. Most of her prints contain captivating vintage babes exuding femme-fatale energy. One print depicts a gaggle of ghoulish girls enjoying a slumber party; a dainty mummy snacks on popcorn while a glammed-up Frankenstein inspects the pedicure on her severed foot. Another Tragic Girls piece portrays a pin-up version of Snow White. She gazes at a bluebird perched on her finger while a group of Disney-fied woodland creatures look on in adoration. Framing the picturesque image is a bubble-font phrase reading “FUCKING BE NICE,” a gentle reminder that we could be a little more like the fairest one of all.

Mansfield’s vintage style is a nostalgic callback to an earlier era, but she’s selective in what she revives. “There’s a nice little phrase I like that goes, ‘Vintage style not vintage values’,” she says. Retro comics and pin-up art are iconic styles of the past, but Mansfield feels that it’s important to recognize the often problematic messages intertwined within these art forms. Comic-like advertisements in the ’50s regularly promoted sexist gender roles and reductionist racial stereotypes. In recognition of this relationship, Mansfield actively subverts the correlation between vintage art and prejudice ideas. “I like to juxtapose drawing in a vintage style by attaching a modern message,” she says. “I try to include topics I’m very passionate about, including feminism, mental health and social equality among other things.”

The Tragic Girls brand uses its artistic platform to speak about important issues, and its apparel line offers an opportunity to carry that message with you. “I love being able to share my art and its message in such a tangible way,” says Mansfield. Her unisex apparel line is size-inclusive and offers everything from long sleeve tees to beanies to sparkly enamel pins. The “Destroy Brutality” tee features a screen-printed image of a fuschia peaked cap and spiked bats arranged in a skull and bones fashion. The powerful image was created in a stand against police brutality, and a percentage of the sales have gone toward several organizations, including the ACLU and the National Bail Out. Other shirts illustrate alien girls, heartbreaking bikers and a certain chainsaw-chested figure. “My ‘Chainsaw Tits’ piece is the most iconic thing I’ve ever made,” Mansfield says. “It’s an utterly ridiculous concept, but it brings together my love of comic books, horror and feminism in a way I’m really proud of.”

“Mansfield’s vintage style is a nostalgic callback to an earlier era, but she’s selective in what she revives.”

Mansfield’s work has appeared in homes and on bodies across the country, and now it’s gracing SLUG’s Craft Lake City DIY Festival Issue cover. Drawing inspiration from Utah’s roots, Mansfield offers her interpretation of the wild west with a twist. “I thought that having a western theme would be a great way to showcase Utah’s really awesome scenery and the red rocks we have here,” she says. In honor of Craft Lake City, Mansfield’s crafty cowgirl arms herself with a trusty set of scissors and knitting needles. Even the tumbleweeds are reimagined as handy balls of yarn.

Tragic Girls will continue to grow as a brand, and Mansfield adds new works to her site regularly. Along with her illustrations, Mansfield hopes to publish her own comic book in the future. “It’s probably the biggest art aspiration I’ve ever had and I want it to be perfect,” she says. “It might take a while, but I know it’s something I’ve always wanted to do and I really want to make that dream a reality.” Whether it’s an entire comic book or a powerful print, Mansfield’s work is a reminder you can be tragic and powerful all at the same time.

Keep up with Tragic Girls on their Instagram @tragicgirlsco. Browse unique apparel, prints and accessories at tragicgirlsco.com.