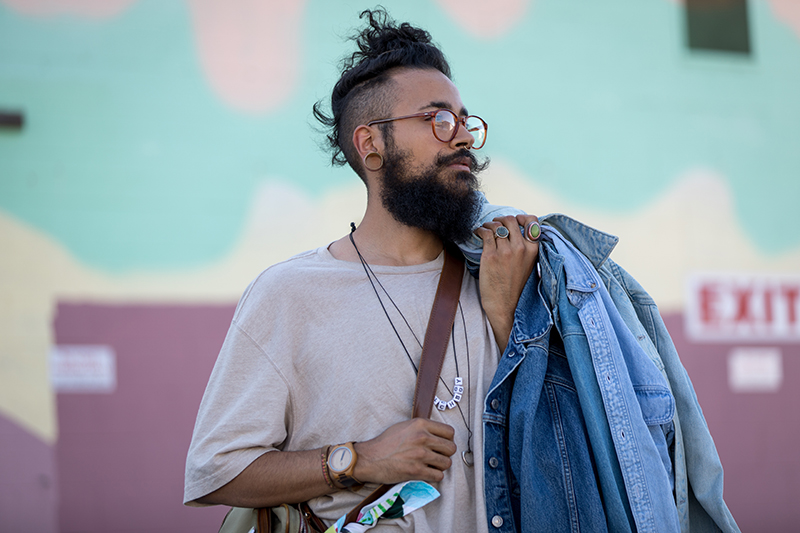 A self-proclaimed trashy romantic, Abraham von Waffles describes his vintage finds this way: “My aesthetic is somewhere between Coraline, Miyazaki and Wes Anderson, with a heavy helping of Jared Hess (Napoleon Dynamite). Basically, my aesthetic is indie witch caught in a mellow pastel world of denim.” Heavily influenced by film, Waffles feels that his outfits are a language that speak to those around him. He’s spent most of his life refining his taste in clothing by curating his own personal thrift collection and even working at a consignment shop for several years.

Referencing his family and many childhood memories of thrifting and upcycling, von Waffles says, “As much as I would love to attribute my inspiration to all of that, to be completely honest, I started thrifting because I was poor, broke and homeless.” Happily, his online vintage shop, t r a s h p a c a, is now a year old and over 220 sales deep. Von Waffles explains that the name t r a s h p a c a is a melding of two of his favorite things: trash and alpacas. Though it seems offbeat, there’s a valid explanation for the juxtaposition. Trash is often considered to be of no value, and even repulsive, to many people. Alpacas, on the other hand, are warm, inviting and have an air of magic about them.

Von Waffles hopes to present “trash” in a new light and make it just as alluring (and stylish) as an alpaca’s fur. In addition, he enjoys the imagery of being someone who quite literally packs around trash for a living.

Track down t r a s h p a c a at the DIY Fest, and you’ll find handpicked denim and pastel goodies (think Barb from Stranger Things), as well as art, stickers, enamel pins, hats and tote bags, all designed by von Waffles. He adds, “I want t r a s h p a c a to be more than just another vintage shop—I want it to be a sort of world that people can immerse themselves into. I want people to buy shit from me that is classic and that they can literally pass on to other little freaks that want to be rad until they’re old A.F.” –Kia McGinnis