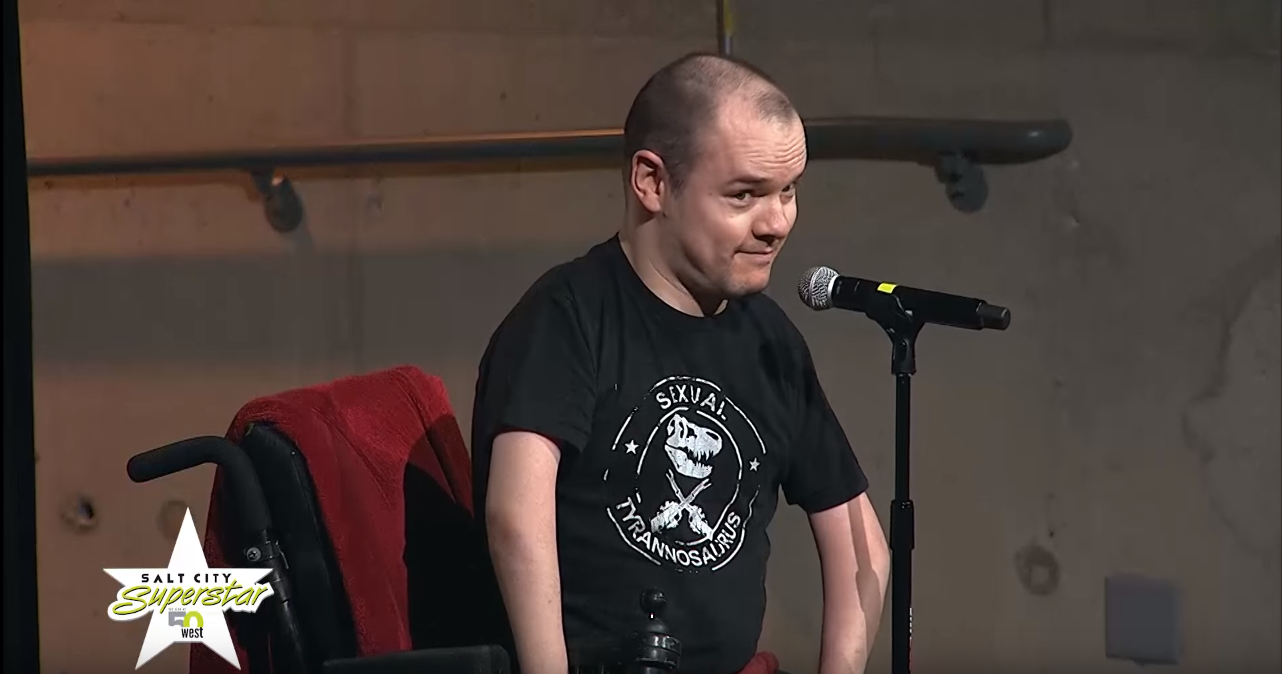 Utah is a big place full of funny people, but few are as unique and passionate as Trevor Kelley. Just off of a busy five-show stretch opening for David Koechner at Club 50 West, Kelley has been one of the hardest working comedians in the state, hitting stages across Utah on a regular basis. He’s a genuinely likable guy, with a flair for voices, and wins over audiences with his playful sets. Though Trevor Kelley may immediately look a little bit different than many other comedians, the only thing that sets him apart once he gets onstage is the height of the microphone. He took a break from his busy schedule to talk with SLUG over a few microbrews, and really lay out his lofty goals, immense love for comedy, and his plans for using and developing his talents. Trevor Kelley started out as most comics do, by making a decision to throw his hat into the standup ring and try out open mics about five years ago. “I didn’t even really do standup,” he says. “Five years ago, I was working in IT and I hated my job and I hated my life. I was like ‘OK, I’m in a position where I can really give this a shot and go for it.’” At the time he lived in Provo and would make a trek up north every week to hit open-mic stages. After that became more and more difficult due to the time and travel, he found an improv group in Provo called ComedySportz and, within three months, had earned his way onto the stage.

He’s always had the advantage of being comfortable when onstage. “I was one of our top guys,” says Trevor Kelley. “I did shows every weekend, sometimes two shows a night. I have hundreds of shows under my belt. So being onstage is something I’m really comfortable with,” he says. He went on from ComedySportz to form the improv group Crowdsourced Comedy, which does weekly shows on Thursday nights downtown at Club 50 West, where he was convinced to join the Salt City Comedy Competition. “I wrote a new set every week for that, and it really helped me mold myself,” he says. His improv background helped him in keeping the energy and flow on stage, and he went on to place third in the competition.

Trevor Kelley has been involved in performance art ever since he was in high school, from the school’s news crew to film class. “I was always the class clown and joking around to make people like me.” He recalls a memory of his buddy back when they were in the 6th grade when they’d tell “dumb stories” to each other. “I remember him making me laugh so hard that I was crying and couldn’t breathe, and that was the first time I wanted to be funny and figure out how to be funny. That was the first time I wanted to be a comedian.” Trevor Kelley grew up watching standup on a weekly basis with his parents. They would enjoy Bill Cosby (though Kelley adds, “may he rot in hell”), Norm MacDonald and Carrot Top. Monty Python’s Flying Circus and SNL were a really big deal in his house. Soon after, he started making funny movies, skits, and participating in the talent show. “I knew that was the key to being popular, which is what every kid wanted.” Both of his parents, as he puts it, are really big comedy connoisseurs. “My mom has always been my biggest critic,” says Trevor Kelley. “She doesn’t really like my dark humor.” Today, his wife and family are still big supporters of his comedy. His dark humor can be a little self-deprecating at times, which is the way he breaks the ice when he’s onstage. Trevor Kelley is in a wheelchair, and it’s something that he does like to play with in his material. “I have learned that it has to be addressed, I have to break the ice and go ‘It’s OK to laugh at this and to acknowledge this. We don’t have to pretend anything here,’” he says. “It is important to me to bring people out of their comfort zone a little bit. Mainly just because, being in a wheelchair my whole life, I’ve been treated a little bit differently and that’s something that is a social construct. In the effort to treat disabled people like they are normal, you end up treating them differently. Some people really resent it. I just see an opportunity to educate people, I guess.” Trevor Kelley addresses his every day life in his comedy, and it becomes very human and relatable, not to mention hilarious. “I think it’s an advantage, really. A tool.”

The fact that he doesn’t see himself as much different than anyone else helps him have the ability to laugh at himself, and at life. “The way I grew up, my parents raised me no differently, to a point. They’re good people. They were tough, too.” He shares that while his mother helped him, his dad let him learn and push through the struggle. “The downside of how they raised me is that I never realized how actually limited I really am. If you asked me what I wanted to be when I was 14, I would have straight up said an NBA player. I didn’t know! I just didn’t know. So my self-image is very normalized.” In a sense, Trevor Kelley feels that he was allowed to have ambitions of grandeur. “You can call them delusions, because that’s what they were!”

Trevor Kelley has a way of really helping the audience visualize his stories, making the comedy hit perfectly. “It’s a skill that I’ve always had, and I think that’s what drew me to improv.” He says he first learned how to do this from his dad, who would tell stories and make up characters. “I definitely got that from him. I’m always playing.” He realized he had come up with a back story about his cats and anthropomorphizing them, which led to one of his funniest sets he performs in his standup. “One of the main things I’m really good at is voices, accents, impressions and stuff like that. It was always a struggle to figure out a way to incorporate that into standup. I know something’s funny, but I don’t always know why. The thing I had the hardest time with is contextualizing jokes.” Trevor Kelley is busy, still doing both the weekly improv shows, and his solo standup act. “Right now I’m doing everything I basically can. I have a Youtube channel—Short Bus Bordello—and an improv group—Crowdsourced Comedy—and I write my own sketches and stuff all of the time. I’m just trying to do as much as I can.” He wants to eventually make it out to L.A. and pick up opportunities there. “I feel like—and I’m sure every comedian feels this way—that if the right person sees me, that would be it. So I’m trying to be in as many places as I can.” He’s been extremely interested in voice work, picking up a few local gigs on podcasts and promotional kickstarters. “What I need to do is get to L.A. where the opportunities are and just grind the shit out of it.” There isn’t a lot of that type of work in Utah, and the little that there is can be hard to come by, says Trevor Kelley. “At heart, I’m just a kid who watched too many movies and played too many video games, and that’s why I can do all of these voices.” He says, “It’s just having fun for me. When I’m onstage, I’m just joking around and hanging out with a bunch of people and we’re all just having fun together.” He’d eventually like to also get into some serious stuff, and try his hand at theater or film.

His passion truly shines when he speaks about how he views his role as a comedian. “I think all of us are somewhat insecure. Comics are always the kind of people that need that reaffirmation from other people. There’s a high you get from doing really good at a show, and that’s what keeps me coming back.” If it’s the comedian’s high he gets from laughter that keeps him doing it, it is his love for the genre that keeps him doing it well. “Comedy is just one of the few things I actually genuinely care about,” says Trevor Kelley. “You can argue with people and debate with people, and you will never change their mind. But if you make a joke about something, and they are like ‘oh my god, that is stupid!’ you can really affect a big amount of change. It’s a good way to make people think, and it’s the best vehicle for change that there is. […] If you think about it historically, it’s often the comics that are pointing out what is not OK. You don’t have to yell at someone and present them with all of these facts and have this huge debate for that to work, you can just make them realize it without having a conflict.”

You can see Trevor Kelley this Thursday, Nov. 19 perform with Comedy and Other Opinions at Club 50 West in downtown Salt Lake City. This special holiday edition is a food drive fundraiser where admission is a non-perishable food item to help hungry families this winter. He also performs live every Thursday night at 7 p.m. with Crowdsourced Comedy at Club 50 West. You can also check out his Youtube Channel, Short Bus Bordello, with original material and short skits.