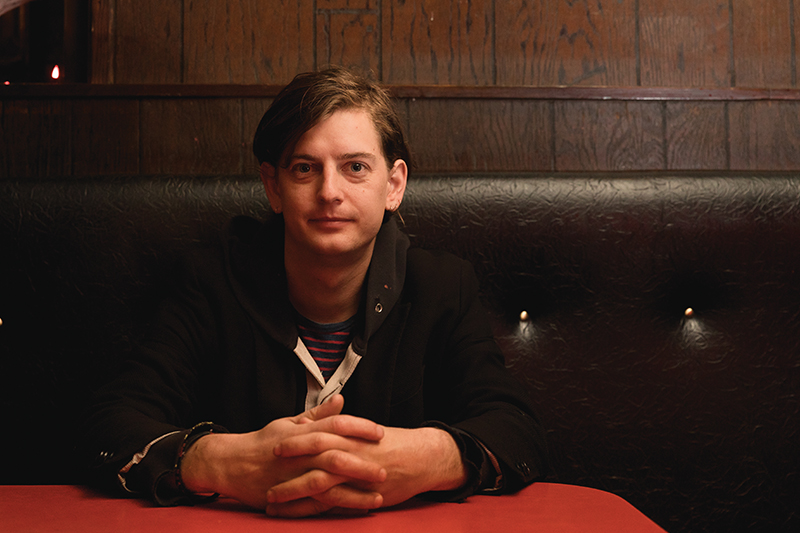 What the Tuck?: Tucker White of Chthonic Releases a Book!

Tucker White—aka “Tuck White” or “Rubber Tucky,” to existing fans—is a difficult person to read, though not in an ominous, brooding or sketchy way. White is hard to read because his humor is layered so deeply with sarcasm, inside jokes (with himself) and “sincere insincerity,” as he puts it. The characters and scenarios White concocts in short stories that he writes depict this playfully mischievous side of White, especially in his first self-published book, The Magic Building. In the spring of this year, Tucker White published The Magic Building through his own label, Chthonic Records (the “ch” is silent), which White started with friend John Boula, who is currently in upstate New York, gardening (according to White). The Magic Building is a book consisting of three short stories: “Who’s Hungry? (The Escape Artist),” “What Happened When Ray and Ted Noticed They Had an Attic” and “The Magic Building.”

The first story is the flat-out silliest. Inspired by the prompt of the subtitle, “(The Escape Artist),” “Who’s Hungry” is about a man who woke up to find out that everyone in the world has been overcome with the insatiable need to eat him. White says, “I thought ‘The Escape Artist’ would be a good title for a story … I thought, ‘Ooh, it would be scary to escape from the whole world; the whole world just wants to eat you.’” The second story offers readers the reason why we weep—a secret that is uncovered by two friends when discovered they had an attic with an unexpected roommate—a little girl. “This one was a little more pre-thought. I was sitting in the backyard with my best friend and roommate, Tiffany. I noticed there was an attic up there, and how interesting it would be to go explore that,” White says. “The Magic Building,” the book’s titular story, is last. It tells a story about a man, one whom White previously wrote about in “An Untitled Excerpt.” In this story, the man discovers that he lives in a magic building and brings a cat back to life through an adventure with a young girl and group of witches.

This is the first book that Chthonic Records has put out, with the intention to encourage others to publish their writings through the label as well. Chthonic Records is known for putting out local releases like Baby Pink’s B Sides and local compilation It’s Halloween Time. White has released multiple music albums under the name Hoops through Chthonic, such as Imaginary Epiphanies 2 (a collaboration with Neil A.), Honeysuckles and The Knowledge Mastery Series. White’s voice in his music, writing and artwork is the spokesperson for the surreal, dreamlike world White’s thoughts and ideas live in. “It is hard for me to see definites, like things that are very concrete,” White says. “Things that are more fluid and dreamlike make more sense to me because they can morph into something else immediately without you wanting it to morph into anything else.” Chthonic provides White a comfortable podium to stretch his specific voice, wherever it goes.

The aim for White is not to become the traditional sense of a “writer,” but to sit down and unveil the story hidden in the nooks and crannies of his subconscious by writing through improvisation. White enjoys sitting down and surrendering himself to a blank page, with no plan, no creative constraints, just the desire to write. His intention is—in a way—to journal through the lens of an absurd character in an absurd reality. You can see this for yourself in his stories—each story has a sense of groundless unpredictability and mind-boggling twists and turns. For instance, in “Who’s Hungry,” the story begins by throwing the reader into sympathetic panic for the character running for their life, without information as to why everyone on earth wants to eat the character, and no plan in sight. Providing this first-person narrative to tell this story makes for vivid reading experience, stabilized by hidden jokes and underlying humor.

White’s preceding published works include “The Life of a Great Leader,” published in a zine put together by Brinley Froelich, and “An Untitled Excerpt” published in Moriah Glazier’s zine Open. These stories share the same cadence and tone White excercises in his book, The Magic Building. Each respective story might be set in a different reality, but you can find the same inquisitive setting in each read, making White’s writings a relishable and amusing collection.

You can find White’s book The Magic Building on chthonicrecords.bandcamp.com for an affordable $10. Although, White says, “Whoever wants it could just have it … I ordered a big box of them because there was a big deal, so I bought 30 and I have 10 left.” To find out more about White’s upcoming projects and other art ventures, follow his Instagram @greendayfan_420 or his Instagram for his artwork, @artist.extraordinaire.