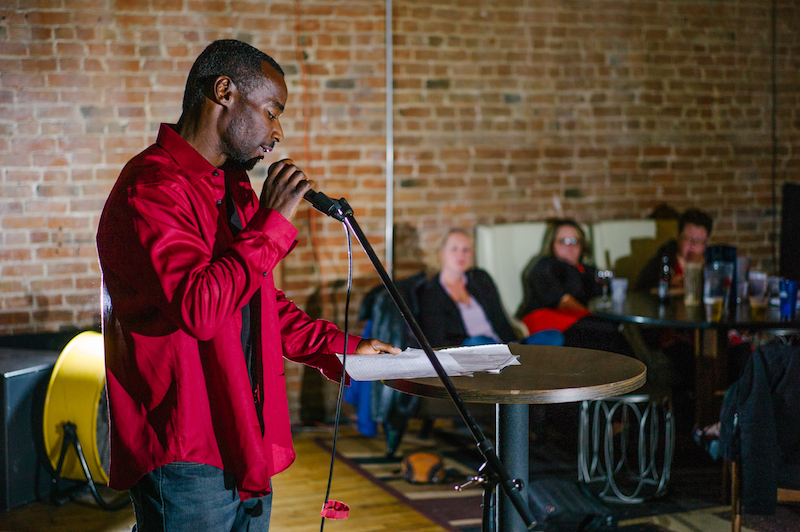 Reading and writing poetry may often be a solitary act, but there is a rich history behind live readings, which take the words from the page to spoken voice and performance. Sometimes cheerful and triumphant, other times melancholic and heavy, poetry readings are never boring. These events in Utah will have you—as Allen Ginsberg writes in Howl—“burning for the ancient heavenly connection to the starry dynamo in the machinery of night.”

Every week in the Lighthouse Lounge on historic “Two-Bit” 25th Street in Ogden, a group of people gather to read poetry and hear others do the same. Completely inclusive and welcoming to all people, PoetFlow was started by Janica Johnstun, who had never before shared her writing publicly. “I was in a very dangerous relationship when I first moved here,” says Janica, “and I needed a reason to live—a reason to leave something outside of me.”

PoetFlow was first organized two years ago when Johnstun, along with her cousin Kase Johnstun, dreamt it up as a spoken-word night. “It took a lot of bravery on my part because I didn’t know anybody here,” says Janica. She had just gone through a divorce and returned to Ogden after moving around the States with a military spouse. “I didn’t have a support system,” she says. “I took the idea to Lighthouse Lounge, and Julie [Hoehn] said, ‘When do you want to start?’”

There is no need to sign up beforehand for a PoetFlow reading, and first-timers are welcome. All genres and styles are encouraged. There is no judgment or criticism, though attendees often cheer on one another, especially when a difficult emotional burden is laid bare or when someone delivers a particularly rousing recital. Drinks and food are available from Lighthouse, and some attend just to watch and listen. In one reading, topics ranged from sex and civility to politics and mass shootings—in other words, everything one might have to avoid talking about when at the dinner table with distant relatives.

In the past two years, many have found in PoetFlow a safe haven: a place to share intimate things in a public setting as a kind of therapy. Janica says that most of the regular writers have shared things that they haven’t shared with anybody else before. Some poets find community, connection and healing through the spoken word, while others come for entertainment or fun. The readings share a space with the adjacent pub area, so the environment is far from tranquil. More than one person there for “the game” might be inclined to wander over, beer in hand, to see someone gesturing wildly over the live microphone, instinctively piquing bystanders’ curiosity. People hear the clapping and want to see what is happening.

Watching PoetFlow, one gets the sense that they have it, that indefinable thing—the essence that sends electricity through the bones and static to the ends of the fingers, something real in an increasingly counterfeit world.

PoetFlow is held every Tuesday night at Lighthouse Lounge. Admission is free and all are welcome to share poetry or watch and listen. Learn more at facebook.com/poetflowogden.

Editor’s note: The quote at the end of the second paragraph previously misquoted Johnstun to have quoted someone else. It now correctly attributes the quote to Julie Hoehn.