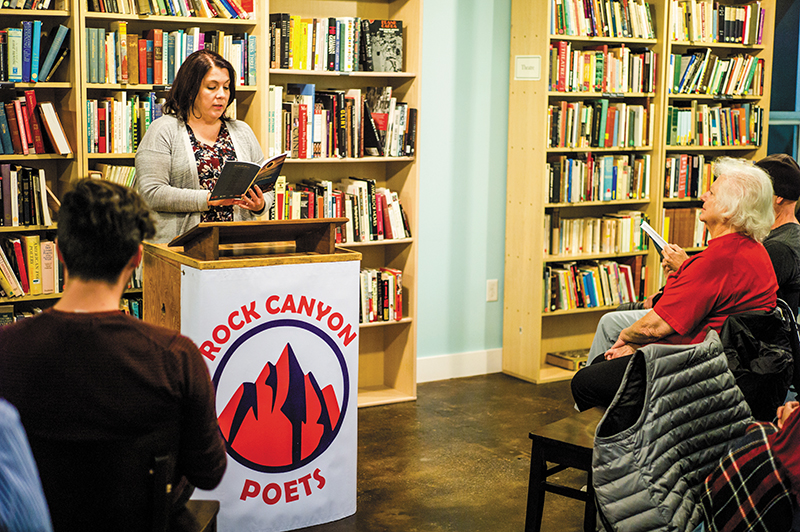 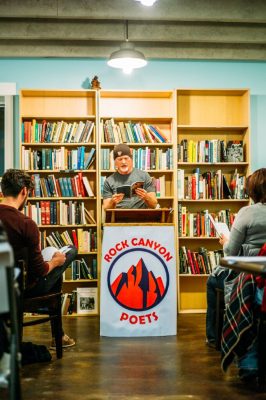 Reading and writing poetry may often be a solitary act, but there is a rich history behind live readings, which take the words from the page to spoken voice and performance. Sometimes cheerful and triumphant, other times melancholic and heavy, poetry readings are never boring. These events in Utah will have you—as Allen Ginsberg writes in Howl—“burning for the ancient heavenly connection to the starry dynamo in the machinery of night.”

Despite rampant development, Provo’s Center Street still retains its hometown Main Street charm. It is the kind of place that one imagines would be perfect for busking for dollars or window shopping for a dress for the spring formal. It is in this place, near an upstairs window at Pioneer Book, where Rock Canyon Poets gather for their monthly workshop. Organizer and founder Trish Hopkinson says the idea had roots in the Utah Valley University English department in 2013. While finishing up her degree, Hopkinson and Bonnie Schiffler-Olson organized Rock Canyon as a way to continue to craft and workshop their poetry. “Once a month, we meet in person, and everyone brings eight copies of their poem and then we pass them around,” says Hopkinson. “We read the poems twice and then we let the poets know what we like, what we think might need some revision. [We] give them some ideas to continue crafting their poem to a finished state.” She says that comments are given in a good-natured way, and everyone is happy to get feedback. 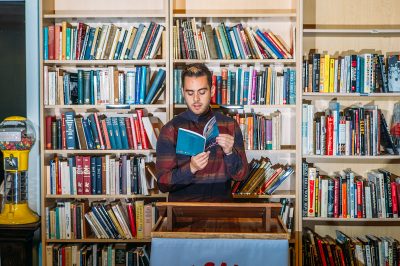 It has now been nearly three years since Rock Canyon Poets was founded, and they just published their third compilation of Utah poetry in a journal titled Inspired. They recently gathered for a release party, during which each author performed readings of their published works, followed by an open mic. Those in attendance were diverse in many ways, brought together by the love of poetry. More outspoken members encouraged the shyer ones to get up and read, and poems ranged in content from gutters to guts, fathers to funerals.

Rock Canyon Poets holds their workshop every month, along with a separate open mic. They also aim to collaborate with the community. Two Rock Canyon poets, Jack Garcia and Aaron Gates, founded peculiar, a biannual LGBTQ+ literary journal. “Their founders are also Rock Canyon poets so we collaborate together a lot,” says Hopkinson. “They do their release night [at Pioneer Book] … and it packs the whole place.” All together, one gets the sense that the Rock Canyon Poets is about people supporting other people and their respective creative endeavors—about community and appreciating this raw, beautiful world, together.

Rock Canyon Poets holds an open mic night the second Tuesday of every month, and a poetry workshop each Fall. Both are held at Pioneer Book in Provo. You can go to rockcanyonpoets.com for more information.