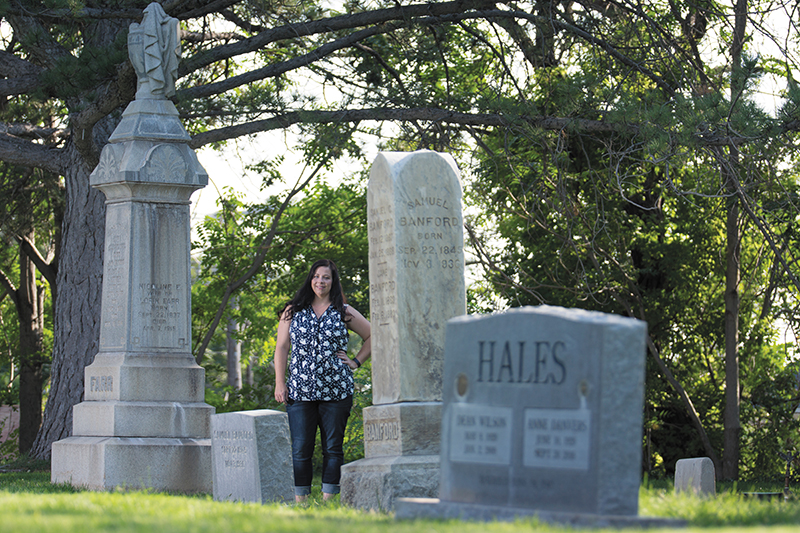 Larry Baird, owner of Making Scents Emporium, has experienced a series of strange events stemming from the basement of his shop on Historic 25th Street in Ogden. It’s where I meet paranormal investigator Jennifer Jones, who runs the popular blog The Dead History, which features research of the history behind haunted places and urban legends through pictures, records and newspaper articles. For Jones, who focuses on popular Utah hauntings, Making Scents is one of the many points of intrigue along Historic 25th Street, which backed up onto Electric Alley, once Ogden’s notorious red-light district. “This building has been here since the late 1800s,” says Jones. “It’s been a saloon, and that’s when most of the deaths happened.” She recounts tales of a man who dropped dead in the saloon, and another who lost his mind and jumped from the second story when that floor was used as a hotel, both of whom are likely candidates for the hauntings at Making Scents. For Baird, these hauntings are an everyday reality—he has experienced pictures being ripped off of the wall, toilets seemingly flushing by their own volition, footsteps being heard when there was no one else in the building, and even shadowy apparitions, which he has captured on film.

The evidence of Ogden’s rowdy past still exists in Making Scents, where Baird boasts two bricked-up tunnel entrances in the basement of his shop, which were used in the days of railroads, opium dens, saloons and rampant prostitution. Electric Alley and Union Station in Ogden—which Jones says is one of her favorite haunted attractions in Utah due to the abundance of ghostly activity and the sheer amount of strange deaths that happened there—are some of the colorful stories Jones’ research has breathed new life into through The Dead History.

The Dead History focuses on the factual evidence that Jones digs up through her research, but does not discredit the ghost stories behind these reputable locations and people. For her, the interest in the paranormal started with two ghost encounters in her past: the ghost of her grandmother’s cat in Maryland and a shadowy specter she once saw in her childhood home in Arizona, which was later revealed to be the ghost of a child who had died in that house previous to Jones living there. “It just kind of all happened at just the right time because it was right around when Ghostbusters came out,” she says. “Ever since then, it was like all the paranormal books, the TV show Sightings, Unsolved Mysteries—I had to watch all of them.”

For Jones, who ran a ghost-hunting team prior to her work with The Dead History, digging up the truth behind legends such as Flo’s Grave in the Ogden City Cemetery often has less to do with the legend but more about adding the elements of reality and history into these ghost stories. “When I started doing [The Dead History], I was kind of afraid that if I told the facts, that people might get upset because I am kind of destroying the legend,” she says. “I think it has almost added another layer to the legend and made people want to know more. I don’t think that people have felt that I’ve done a disservice to them.” Flo’s legend stems from her untimely death at age 15 in 1918 and involves shining headlights on her headstone to see her ghost, because she was thought to have been struck by a car waiting for her boyfriend. What Jones found, however, was that Florence Grange actually went by her middle name, Louise; was a popular girl who attended parties; and was even on a volleyball team. She was the unfortunate victim of the Spanish flu, which was so widespread that Ogden essentially sealed off the town, letting no one enter or leave without notice from a doctor. Florence Louise Grange was the only one to die in her family, though they had all contracted the disease.

Because Jones had spent so much time combing through records involving Flo’s Grave, she feels a personal connection to the girl behind the ghost story, “In her case, and with a lot of the hauntings and the legends, there’s always a little truth in the story, even if it has gotten twisted over time,” says Jones, “but hers will always be my favorite because I was able to find out little details that made her real and not some legend that people tell others to freak them out.”

Though Jones likes to uncover the factual evidence behind a place or a person’s life when she performs her research for The Dead History, she views others’ experiences as having credence, based on her own ghostly experiences. “I try very carefully to not tell people what they’ve seen is wrong or impossible or anything like that,” she says. “I just want to present that this is what the stories are and this is what really happened, and usually, somewhere in the middle, the two kind of meet.”

Jones currently takes requests to research haunts though her website, making it her mission to intersect history and the paranormal. If there’s an urban legend tied to a ghost or a haunted place in Utah (and out of state as well), chances are that Jones has looked into it through The Dead History blog, which can be found at thedeadhistory.com.