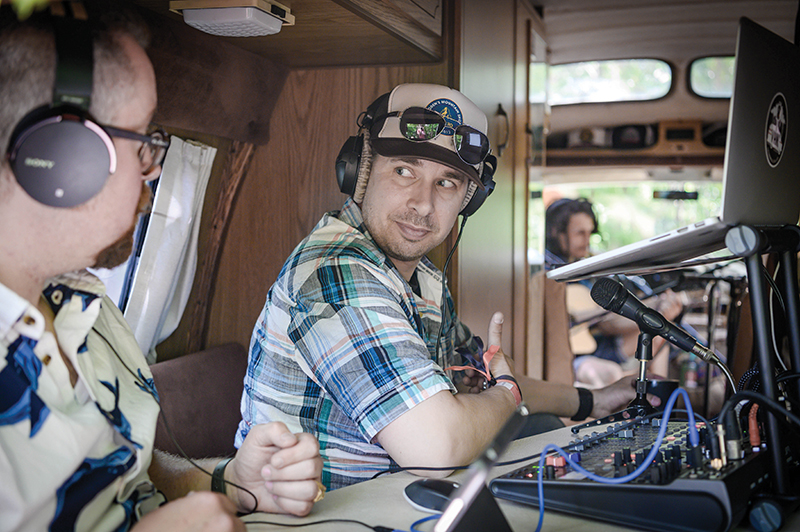 In a Van Down by the Railroad Tracks: Van Sessions Podcast

SLUG: How would you describe The Banyan Collective?

Oberndorfer: We ARE The Banyan Collective. In addition to myself, R. Brandon Long and John Wojciechowski make up the Collective. We started the Collective five years ago, in June of 2014, as a community podcast resource for arts and adventure. Our current lineup of podcasts includes The Ogden Outdoor Adventure Show, the Nine Rails Arts Podcast, Van Sessions, LITerally, and Leaky Waders.

SLUG: Where did the idea for the Van come from?Long: The van, a 1987 Dodge Xplorer camper van we refer to as #TanVan, I bought from my parents around 20 years ago. One day, while attending the monthly Ogden City Arts Advisory Committee meeting (Todd and I are both members), the idea for an Ogden First Friday Arts Stroll emcee came about. I had emcee’d finish lines of some sporting events and offered up my services. At some point, we thought it would be a good idea to involve live music to move things along and provide entertainment. I mentioned, “I have a van. I can just emcee from the van and we could have the musicians play from the van as well.” And Van Sessions started.

SLUG: What’s the mission of your podcast?

Long: We found that Ogden really needed a venue for all-ages musicians to perform. Van Sessions has helped with that. We also provide musicians with their recordings, which they can use to help push their brand. We love introducing our community to our talented musicians and providing a fun space for performances.

SLUG: In what way do the bands and genres that you feature on the Van Sessions reflect Ogden?

Oberndorfer: Most of our musicians fall into the singer-songwriter category. We try to represent the diversity that truly is Ogden’s music community. Everything from first-time performers to national touring artists/bands, [from blues to reggae]. Good music is good music, regardless of the genre. We’re also fortunate to be able to host all-ages musicians/bands, which allows us to introduce “are-you-fucking-kidding-me-how-talented-these-kids-are” sessions to our audience.

SLUG: What kind of community is your podcast looking to cultivate with Van Sessions, and how are Ogdenites responding?

Oberndorfer: Ogden truly is small-town cool. There’s something special about this place. The Banyan Collective is doing its best to share Ogden’s stories—musical and otherwise—with as big of an audience as we can muster. With Van Sessions, The Banyan Collective has put itself in a position to not only shine the light on existing talent, but also introduce new musicians to an ever-increasing audience.

SLUG: Is there a set structure to each episode, or are they more spontaneous?

Long: The formula is typically a four-song, semi-acoustic set with questions and conversation in between songs. We now have a permanent home at The Monarch in Ogden. This allows us to play with the format, and we’ve now introduced a couple bands with full—night shows playing six or more songs. Check out Banyan’s house band’s, The Proper Way, Van Sessions podcast as an example. It’s great!

SLUG: How often do you guys air a podcast, and on what platforms does it stream?

Long: We record one to three bands each month and work to release those performances within that month. [We] do our best to release as consistently as possible. If you follow Van Sessions on iTunes, Spotify or our website, you’ll never miss an episode.

SLUG: Any plans, events or programming coming up?

Oberndorfer: In addition to creating a new studio/headquarters, we are now able to record Van Sessions at The Monarch year-round during Ogden’s First Friday Art Stroll. Because of the success of this year’s Van Sessions at OFOAM’s Ogden Music Festival, we were reminded how fun it is to take the show on the road. Keep an eye out for more Van Sessions tours. The perks of a mobile studio!

And there you have it, Utah. A traveling, musical, concert van (#TanVan) could be en route toward you, so check out the Van Sessions Podcast for an incredible catalogue of shows (Snarlin Yarns, Carrie Myers, etc.) and potential appearances in the future.

Editor’s Note: An earlier version of this article incorrectly listed Todd Oberndorfer as being in the feature photo. The article also credited John Wojchiechowski with answering questions, although he is no longer involved in the making of the Van Sessions podcast. Corrections have been made to remedy these errors.