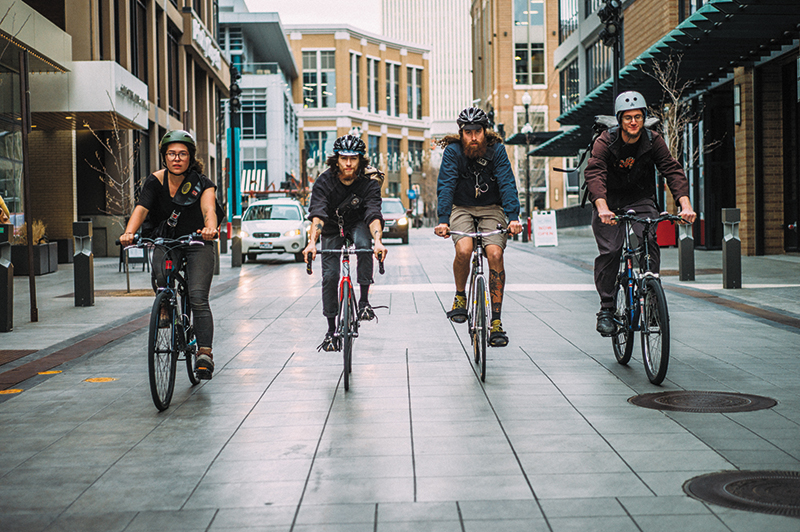 These days, electronic words travel at the speed of light. News from Europe or China zips to our smartphones often before reporters have even fully figured out what happened. But sometimes, a physical object needs to get from point A to point B—fast. It might surprise most people, but in a dense urban environment, the quickest and most efficient method is a bicycle courier. They can be seen with a messenger bag slung on their hip filled with precious documents or goods. They zip past cars and dodge physical injury (or worse) on a daily basis. Often used by government agencies, lawyers and … well, more lawyers, bike couriers slip through cities like fish through water.

Salt Lake City has two courier agencies that deliver by bicycle, Legal Messenger Inc. (LMI) and Salt City Couriers (SCC). “You ride on the same streets, so you always see each other, and you usually head-nod,” says Graham Abrams with LMI. “Or, if you’re too busy, you just look at each other and you just know, ‘Oh, damn, they’re on a rush’—you know, shit like that.” There is a kinship within the profession, perhaps partly forged by the extreme physical exertion, dealing with rain, snow and traffic hazards. “Weather conditions used to really impact whether or not I’d want to commute or travel by a bike, but you get really used to biking in the rain and the snow, and it doesn’t seem that bad,” says Jessica Collette with SCC. “You just learn to layer up properly. It’s less of an obstacle now.”

Both courier agencies also offer truck- and car-based services, but oftentimes—especially within the city—a bicycle is the most efficient. The messengers arrive at their destination, chain up their bike and navigate the security checkpoints that often bar the entrance to the type of clients they serve. “When I first started working, it was intimidating,” says Jake Matsukawa with LMI. “You see all these [security] dudes, and you have to get clearance to go to certain places, and then within a couple weeks, they’re just like, ‘Oh, hey!’ You know each other. And that’s where you’ve gotta be smart and befriend those people because they’ll help you out a ton.” Going into high-security buildings daily means that they have to be wary of carrying knives or anything else that might be considered illicit or dangerous.

Bike couriers were central to the story of the 2012 Joseph Gordon-Levitt film, Premium Rush. It depicts a frenetic lifestyle of dodging cars, racing other couriers and danger at every turn. And while those things may be somewhat true to life, Matsukawa says, “That’s some fake Hollywood shit.” Bike messengers were also the subject of a sketch on television show Portlandia, with Fred Armisen lovingly poking fun at the subculture, donning fake-gauged ears and riding around yelling at drivers.

For a look at the real thing, Matsukawa suggests watching Mash SF, which is a video produced by a San Francisco crew of the same name. The video focuses on riding fixed-gear bicycles, which are single speed and have a drivetrain with no freewheel mechanism, which means if the bike is in motion, then the pedals are spinning. This style of bike is favored by many bike messengers because of their simplicity. Many riders don’t have brakes on their bike, which requires them to brake by applying force with their legs. “I basically saw that movie, and I was like, ‘Oh damn, you can ride a fixed-gear and get paid to do it, messenger style,’” says Matsukawa. “That’s what’s up.”

All of the Salt Lake City–based couriers took different paths that led them to the job. Adam White with SCC says, “I saw a Craigslist ad for Salt City Couriers to be a bike courier, and I was looking for a job making money from biking. So I went in and went on a ride with one of the couriers. It was like a bicycle-riding interview.” Collette moved to Salt Lake City after living in Alaska and needed a job. She hadn’t necessarily been into bicycle culture but wanted a job that was physically active and outdoors. “They made sure that I knew how to ride a bike and could handle the physical nature of everything, and kind of the fast pace,” says Collette. “It is a hard job.”

Sadly, the number of bike messengers needed is slowly decreasing. “Electronic filing happened about five years ago, and that was really what did it,” says Abrams. “It made [it] so, instead of hand-filing, you electronically file like 75 percent of the stuff, and now a lot of what we do is less filings, more copies, courtesy copies to judges and commissioners. There’s always going to be a need for signed contracts and title companies and stuff. Getting escrow, getting the process going with signed documents and stuff like that. Because if you’re paying top dollar for these law firms to do this work for you, they want to do it fast, and they’re hiring messengers to do it that same day.” Despite the decrease, bike messengers will likely always play a role in the machinery of cities. Like all bicyclists, it is important for drivers to keep an eye out for them to keep them safe. And if they seem like they are in a hurry, remember: That’s their job.